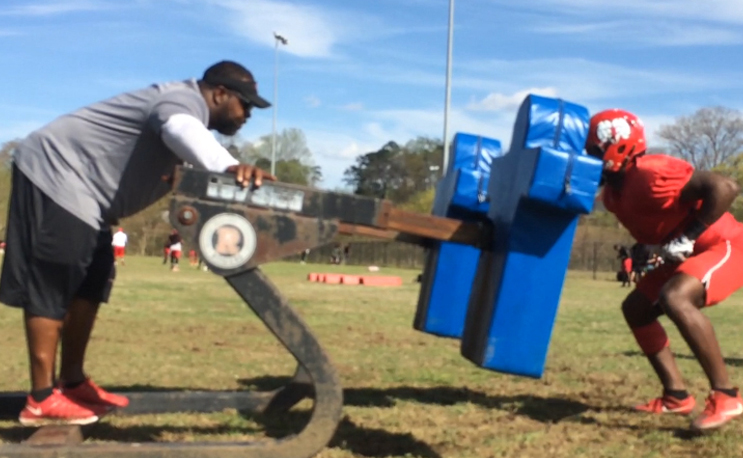 Natrone Means hired at UNC after starting at HBCUs

After spending much of the last decade and a half in the CIAA, Natrone Means has been hired by his alma mater.

After starting his career at HBCUs, former North Carolina star and NFL running back Natrone Means is headed home.

Means has been hired as an offensive analyst at UNC by his collegiate coach Mack Brown.

“We’re thrilled to welcome Natrone to our coaching staff,” said Coach Brown. “Obviously, he was a great player for us and in the NFL, so he understands this place. He’s been a well-regarded coach at various levels since he retired from the NFL. We think this is a great opportunity for him to grow as a coach and for him to help our program in a critical role.”

He most recently served as offensive coordinator, assistant head coach and running backs coach at Fayetteville State in 2020.

Means was a two-time first-team All-ACC selection and finished his career with 3,074 rushing yards and 34 touchdowns on 605 attempts. He also had 61 receptions for 500 yards as well.

Means had a stellar career in the NFL, where he enjoyed a seven-year career that included a trip to Super Bowl XXIX. He became the youngest player (22 years old) to score a touchdown in the Super Bowl. He was drafted by the Chargers in the second round (41st overall) of the 1993 NFL Draft. For his career, he totaled 5,215 yards and 45 touchdowns. In the 1994 season, Means rushed for 1,350 yards and 12 touchdowns and earned All-Pro and Pro Bowl honors. In 2009, he was honored as a member of the San Diego Chargers’ 50th Anniversary Team and was a finalist in 2012 to be inducted into the San Diego Chargers Hall of Fame.

When his career was over, he got his first coaching job in the CIAA.

Means began his collegiate coaching career at Livingstone College in 2005 as running backs coach and was promoted to offensive coordinator in 2006. After spending time in the high school ranks, he later worked as Regional Scouting Director for Collegiate Sports of America and later became Running Back Lead for the Nike Football Training Camps.

He returned to the CIAA in 2014, serving as running backs coach at Winston-Salem State University. Means served under his former UNC teammate Kienus Boulware and helped WSSU to three-straight CIAA championship games. WSSU won back-to-back titles in 2015 and 2016 as Means helped running back Kerrion Moore finish with better than 3,000 yards and 35 touchdowns in his WSSU career.

Natrone Means was hired by Fayetteville State last spring, but never coached a game as the CIAA postponed fall football and eventually scrapped plans for spring football as well.

Natrone Means hired at UNC after starting at HBCUs