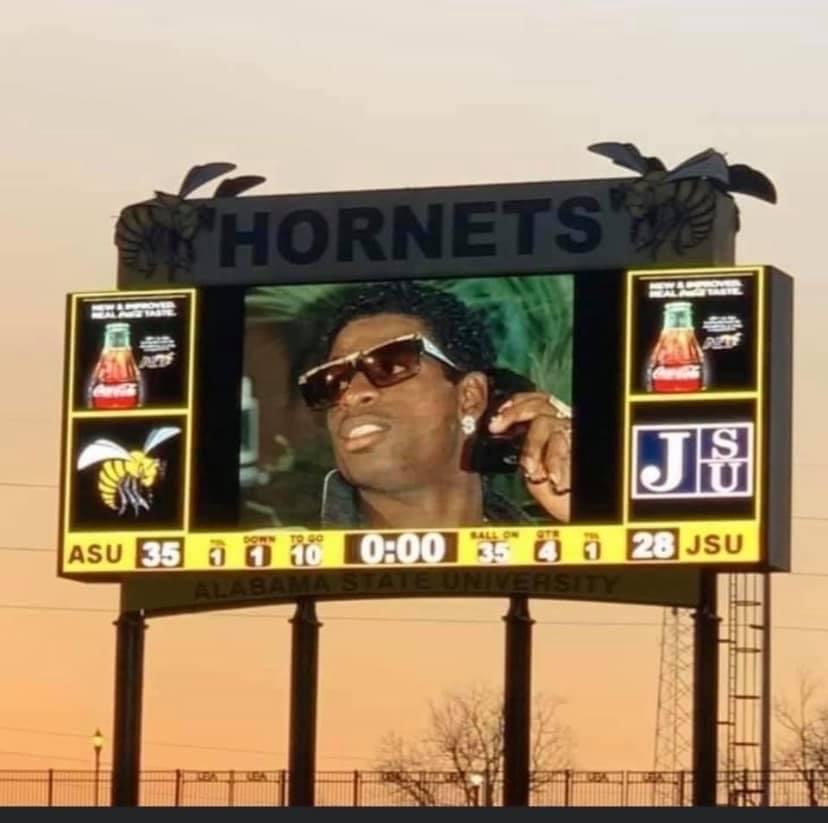 Deion Sanders and Jackson State are unbeaten no more. Alabama State pulled off the upset on the legs of Ezra Gray.

Alabama State head coach Donald Hill-Ely admitted earlier this week that Jackson State was a much-improved team under Deion Sanders. But his ASU squad might be better than expected as well.

ASU came up with a 35-28 upset over nationally-ranked JSU, largely behind the legs of running back Ezra Gray. Gray rushed for three touchdowns — all in the fourth quarter — including a 50-yarder to win the game with 1:29 remaining.

Gray’s final score came just 13 seconds after JSU quarterback Jalon Jones ran in from two-yards out to tie the game. He finished with 195 yards on 23 carries to help ASU improve to 1-1.

Jones finished with 274 yards of total offense, including 94 rushing yards, and ran for two scores. He also threw a 17-yard touchdown pass to Corey Reed Jr., but tossed two interceptions as well.

Corey Reed, Jr. was a standout for JSU with eight catches for 99 yards. Daylin Baldwin was held scoreless for the first time this season.

The loss was the first for JSU under Deion Sanders and sets JSU’s SWAC record at 2-1.

“We did not play smart and we were not disciplined,” Sanders said of his team’s performances. “Tough and fast — we did that.”

After the game, ASU celebrated the victory by putting up a photo of a young Deion Sanders up on the scoreboard.

“Childish. It is what it is. They know they messed up,” he said when asked what he thought of it. “They didn’t furnish tickets to our fans. They didn’t let our team in the locker room to unpack everything until this morning. It was just childishness. It is what it is. And I’m going to call them out on it. They tried to respond for the foolishness. We gotta keep it on the field and make it about the kids. Make it about the fans. It ain’t about me.”

JSU will have a week off thanks to the Prairie View postponement before hosting Southern on April 4. Alabama State will look for its second win against a UAPB team that is perfect on the season so far.