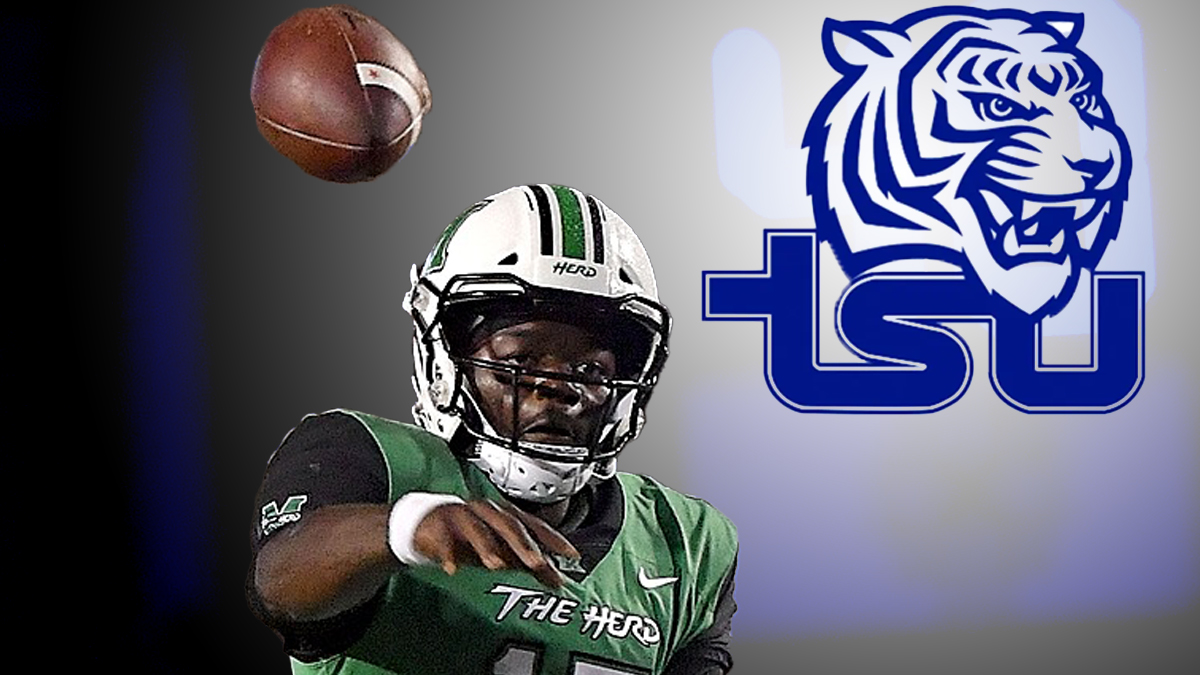 Former Marshall quarterback Isaiah Green didn’t get in early enough to help Tennessee State overcome a slow start. But there is reason for optimism.

CLARKSVILLE —  Tennessee State lost its 2021 spring opener, but it may have found its starting quarterback in Marshall transfer Isaiah Green.

Green and TSU gave a valiant effort trying to overcome a large first quarter deficit before falling to Austin Peay 27-20 at Fortera Stadium on a rainy Sunday afternoon. He completed 10 of 18 passes for 173 yards and a touchdown in the loss.

The Tigers found themselves down 20-0 midway through the first quarter as Austin Peay scored on the first play of each of its first three drives. Despite the deficit, the Tigers started to find a rhythm on both sides of the ball.

“Was really proud of our football team tonight,” TSU head coach Rod Reed said after the game. “We didn’t start fast but our kids never quit. They hung in there and we gave ourselves an opportunity the last play of the game to win the game. We have to start better defensively. We stunk it up in the first half. We made a few adjustments during the second quarter and at halftime and we totally dominated the game defensively in the second half, except the one big play that Nick Harper gave up on the stop and go route. I was really proud of the way the defense played tonight.

The defense stepped up after giving up 186 yards on the Govs first three plays and held them to 181 yards for the final three and a half quarters.

The offense would get going as redshirt sophomore Deveon Bryant registered his first collegiate touchdown pass late in the second quarter, finding Vincent Perry in the end zone to make the score 20-7 at halftime.

Antonio Zita cut the score in half with a 35 yard field goal midway through the third quarter, but the Govs responded with a touchdown to extend the lead to 27-10.

The Tigers fought back with another Zita field goal and a six yard scoring pass from  Green to Cam Wyche.

The Big Blue made one final stop to get the ball back with 1:32 remaining on the clock.

Green completed three passes on the final drive to move down to the AP 24.  The final pass attempt as the clock hit zero fell short of the end zone, securing the win for the Govs.

It’s no surprise that Isaiah Green can play at the FCS level, as he started 13 games at Marshall as a sophomore. He completed 189 of 336 passes for 2,438 yards and 15 touchdowns against 11 interceptions that year and had one of the best freshman seasons ever in school history. So why wasn’t he starting? Well, according to his coach, no one was sure he could play at all coming into the weekend.

“We inserted him late in the game and some people wonder why we waited so long. He practiced maybe one day this week. He got eligible yesterday around noon,” Reed said. “We weren’t really comfortable starting him and putting him in there, but you can see that he can run our offense and do it efficiently. He just has to learn everything and get more reps.”

TSU returns home to Hale Stadium on March 7 when it hosts Jacksonville State.