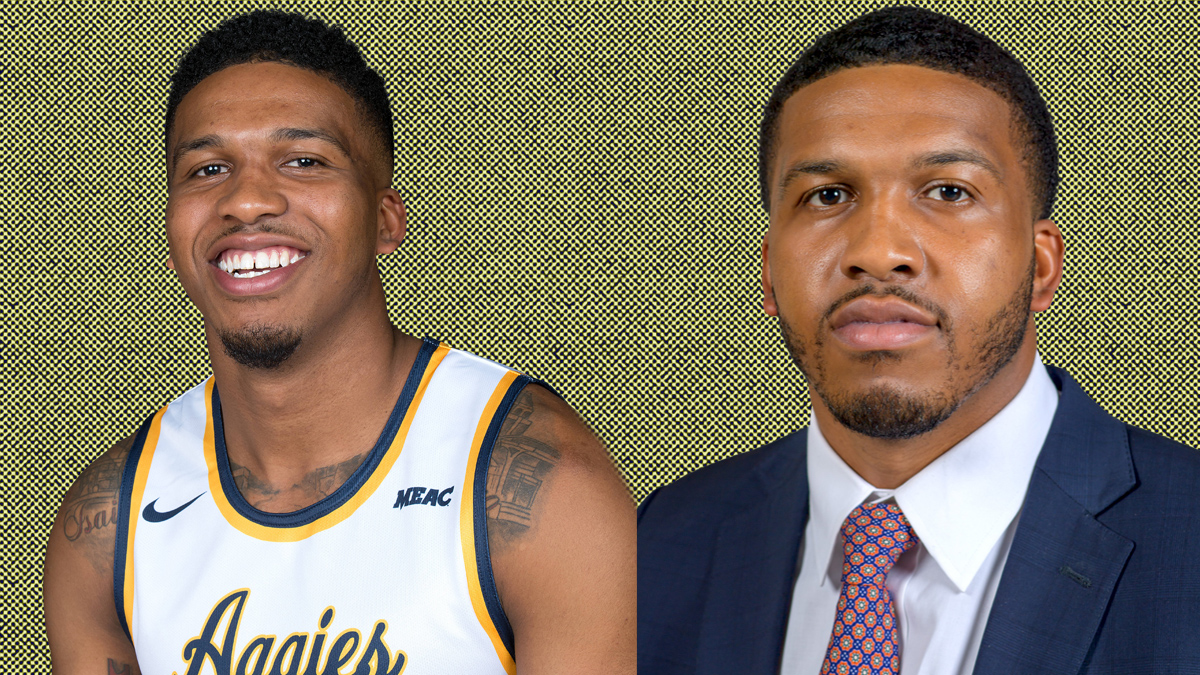 EAST GREENSBORO – Head men’s basketball coach Will Jones announced on Wednesday, the additions of Sam Hunt and Bruce Martin to his staff.

Hunt will serve as the third assistant alongside Ahmad Dorsett and Phillip Shumpert. Martin will be the special assistant to the head coach. Ahmad Abdullah will return as the men’s basketball staff’s director of basketball operations.

Included in Hunt’s role as an assistant coach, he will also be the director of skill development. He will be responsible for players improving their skill set. His area from recruiting will be North Carolina, South Carolina and Florida.

Sam Hunt was a standout prep star at Dudley High School, which is a mile from N.C. A&T’s campus. Hunt attended Jacksonville University out of high school before transferring to N.C. A&T for his sophomore and junior seasons starting in 2015. He finished his collegiate career at N.C. State.

In his two seasons as an Aggie, he compiled 853 points and led the Aggies in scoring both seasons. He is one of the best free throw shooters in school history, making 91.7 percent (187-for-204) of his free throws during his time in Greensboro. During the 2015-16 season, he was fourth in the nation in free throw shooting (90.4 percent). He made 140 3-pointers as an Aggie making 34.7 percent of his attempts.

He finished his collegiate career with 1,035 points.

“Sam is one of the best up-and-coming young coaches in the nation,” said Jones. “We are lucky to have him join our staff. His skills on the floor along with his unbelievable personality will allow him to tap into our players and the recruiting trail.”

Martin’s main responsibilities will include program management and operations as well as helping Jones with fundraising efforts. Martin comes to A&T with a plethora of coaching experience. Most notably, he has spent time at Clemson, his alma mater, as well as the University of Wyoming, Radford and Florida A&M. Martin also served as the head coach of the Ockelbo Basketball Club in Sweden for one season.

“Bruce adds a wealth of knowledge to our staff,” said Jones. “He played and coached at the highest level of college basketball and has worked with some of the top coaches in the business. He will assist us in taking our program to one of the top Mid-plus programs in the country.”

Martin is a 1994 Clemson graduate. A four-year letterwinner at Clemson from 1991-95, the former guard is shot 44.4 percent from 3-point range, third best in the ACC, his senior season. During his Clemson career, Martin was named to the ACC academic honor roll in 1992-93 and 1993-94. He played his final year as a graduate student when he was a team captain and helped Clemson to the National Invitation Tournament. Clemson’s 1992-3 and 1993-94 teams also were chosen for the NIT.