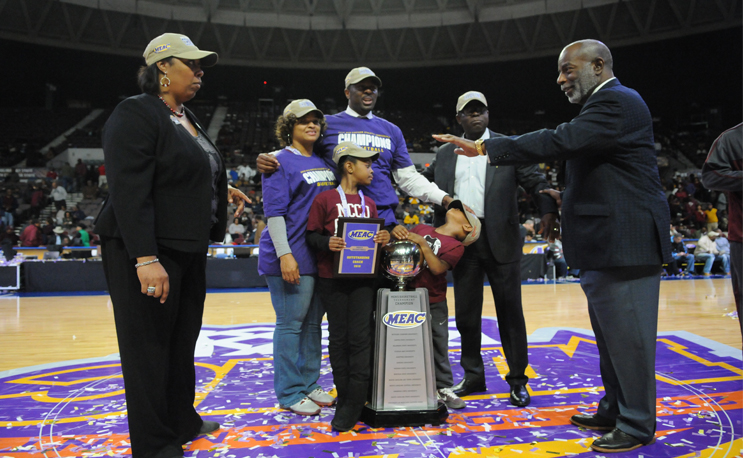 The MEAC has been staggered by the loss of several key programs, but its commissioner says the ball will keep rolling.

MEAC Commissioner Dr. Dennis Thomas provided some answers Monday when he sat down for a wide-ranging interview via Zoom on the B. L. O. C. K. Sports Show with host Michael Jefferson and a trio of sports journalists.

“Contrary to popular belief in some circles, the MEAC’s demise has been greatly exaggerated,” said Thomas during the sit-down.

His comments were the first by a conference official since FAMU’s announcement. FAMU’s decision came on the heels of North Carolina A&T University announcing in February that it would also leave the MEAC and begin membership in the Big South Conference in the 2021-2022 season. It also follows two other former MEAC members – Hampton University and Savannah State University – leaving the conference in 2017, Hampton to join the Big South and Savannah State dropping back to NCAA Div. II status and re-joining the Southern Intercollegiate Athletic Conference (SIAC).

Going from 13 members to nine after the 2020-21 season, just seven that play football, in the span of three years however has prompted questions about the league’s future.

“All of our presidents and chancellors are concerned,” Thomas explained.”But we also have a great group of presidents and chancellors that are veteran leaders on their individual campuses. “We have implemented a strategy in terms of how we move forward as a conference. Part of that strategy is to ensure that we have a core group of institutions to ensure that we will not lose our Div. I status.”

To maintain Div. I standing, conferences have to have seven institutions that have been a part of the conference for eight consecutive years and offer the right mix of sports, he explained.

“First and foremost, the world is not coming to an end,” said Thomas. “I can assure the public that the MEAC obviously is disappointed that some member institutions decided to be a part of other conferences. That’s just the nature of what is. So, we wish them well. Obviously, we see things a bit differently.”

Hampton, N. C. A&T and FAMU each talked about the burdens of traveling from Delaware to Florida for athletic competition in the MEAC as well as a loss of class time for student/athletes because of those long trips and
greater proximity to institutions in their new conferences as determining factors in their decisions.

“From the MEAC perspective, we have an array of outstanding academic institutions still in our conference,” said Thomas. “And, from maintaining our (NCAA) Div. I status, we can do that with seven members that meet the NCAA requirements. “Some people forget – given this microwave mentality in our society,” said Thomas, “we were founded with seven members from Dover, Delaware to Orangeburg, South Carolina,” referring to the league’s creation in 1970.

Thomas said the league expanding and perhaps drawing new members is not an overnight process.

“You can’t wave a magic wand and people just come in. That’s not the way it works in Div. I intercollegiate athletics. And that’s not going to happen with the MEAC.”

He explained that the MEAC has been in the business of adding new members since he took over the reins of the conference in 2001 and before. Since its beginning, the conference has seen the additions of Florida A&M and Bethune-Cookman, Coppin State, Hampton, Norfolk State, Savannah State, and Winston-Salem State.

“Everyone that has left the MEAC gained their prominence in the MEAC,” said Thomas. “Those are facts. People increased their enrollment, increased their research funding, and won championships. Greatness was had in the MEAC. “But we respect their decisions.”

Thomas, who was a standout offensive lineman at the SWAC’s Alcorn State during his playing days in the early 1970s, also discussed what it would take to bring 4- and 5-star athletes back into the HBCU fold.

“That’s a question I’ve been pondering for over two decades now,” said Thomas. “It’s nothing new. “If we got half of the black talent for football and basketball (that used to attend HBCUs), the MEAC and SWAC would be Power 5 conferences,” he said.

“Those are facts. Because it’s about whether you can compete at the elite level. Obviously, when you look at these conferences and their member institutions, there’s a preponderance of black student/athletes in those programs. “So, it has to be a grassroots change in the way we perceive what greatness is. It has to be by the parents . . . and I’m not talking about specifically their high school coaches, but by their elementary school coaches, their Pee-Wee league coaches, their flag football coaches. See, there’s a disconnect that there is value in attending HBCUs at the Div. I level.

“We have over the decades seen people who actually graduated from HBCUs and are doing exceptionally well as professionals . . . perceive that going to a Power 5 institution is a much better perspective than going to an HBCU. So if you have parents and relatives who are products of HBCUs saying that they would prefer their sons or daughters attend those institutions, that’s where the disconnect is.”

So Thomas says, “I’m not saying that parents don’t have a right to send their sons and daughters wherever they want to. But don’t complain as to why HBCUs aren’t competitive when you send our best and our brightest to other places.” “We have to change the narrative and start inculcating in those talented elementary school and middle school kids that there is value and that they will be taken care of by going to an HBCU.”

“And we have to educate our parents, and start this early on, that you need to consider an HBCU not only for your athletic career but for your education.”

766
The Latest in HBCU Sports and Culture