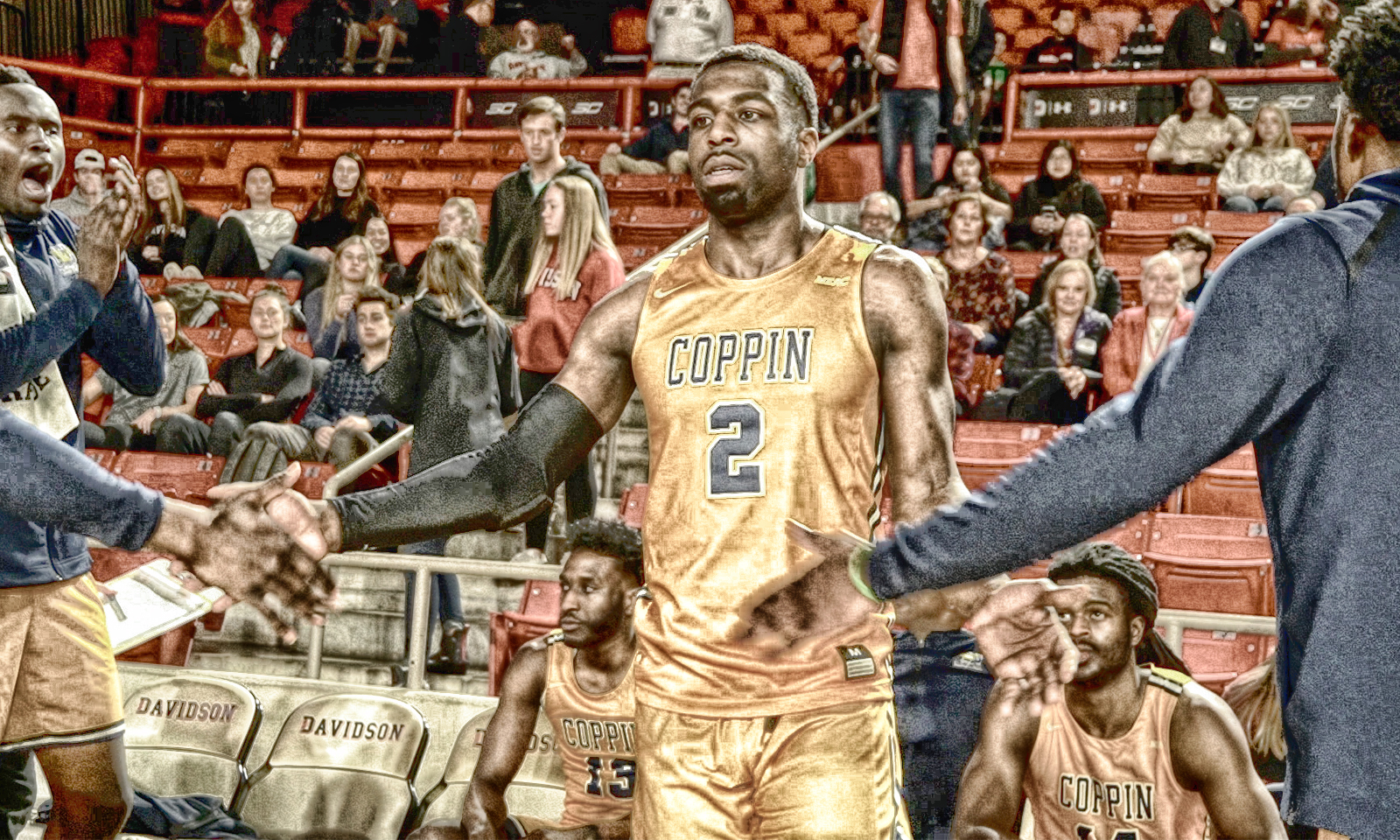 The Baltimore Eagles are adding to the Flock.

BALTIMORE – Coppin State men’s basketball head coach Juan Dixon has announced the addition of seven newcomers to the Eagles for the 2020-21 season.  Included in the class are a pair of true freshmen, three junior college transfers and two players from Division I programs.

Head Coach Juan Dixon on Dwaine Jones, Jr.: “Dwaine is a pass first point guard with high basketball IQ and the ability to create for himself. Dwaine is a tireless worker and student of the game. We expect Dwaine to earn the trust and respect of his teammates immediately.”

Head Coach Juan Dixon on Nendah Tarke: “Nendah is going to be special! His athleticism, timing on cuts, and finishing ability are all God-given gifts we plan on utilizing. Nendah is going to come in and compete right away, especially defensively. He doesn’t backdown from anyone.”

Attended Bryant University and played in four games with one start against Saint Peter’s as a freshman in 2018-19 before transferring following the Fall semester… Scored two points from the free throw line to go with three rebounds at Seattle… Also had an assist against the Peacocks…  Played his sophomore season at Seward County CC in Liberal, Kans., and averaged 10.5 points with 3.1 rebounds while making 41.3% of his shots from deep… Played two seasons at Holmdel High School where he was named All-Division as a sophomore before transferring to Mater Dei Prep… Earned First Team All-Division and Second Team All-Conference accolades as a senior… Named Shore Conference Tournament MVP after leading team to a Conference Title as a junior.

Head Coach Juan Dixon on Kyle Cardaci: “Kyle is a winner and has the ability to lead on and off the court. His toughness and swagger coupled with his ability to play in pick-and-rolls as well as make open catch-and-shoot 3’s is a much-needed addition to our program.”

Played two seasons of junior college, starting with his freshman year at Pensacola State College in Pensacola, Fla., before heading to Schoolcraft College in Garden City, Michigan as a sophomore… Averaged 6.3 points, 5.5 rebounds and 1.3 blocks while shooting 53.2% from the floor in his first season… MCCAA Defensive Player of the Year as a sophomore after finishing second in the NJCAA with 110 blocked shots and 3.4 blocks per game… Also put up 7.9 points and 6.1 rebounds while making 59.0% of his shots while helping the Ocelots to a 28-4 record and a fifth seed in the NJCAA National Tournament… Averaged 15 points, 13 rebounds and seven blocks as a senior at Reading High School under head coach Gordon Hammersmith.

Head Coach Juan Dixon on Bryce Hunt: “Bryce is a relentless basketball player His motor is truly a gift to behold and he is going to do whatever he needs to do in order to help us win. Whether he’s blocking or altering shoots around the basket or run the floor in transition, Bryce’s impact will be felt immediately.”

Played a season at Harcum College and averaged 10.3 points and 3.6 rebounds while making 47.9% of his shots from the field and 45-of-126 (35.7%) of his 3-pointers… Helped the Bears to a 26-4 overall record and a trip to a Region 19 Championship where he was named to the All-Tournament Team… Averaged 17.8 points over the final four games including a team-high 22 points in the District Championship Game… Played at The Patrick School for head coach Chris Chavannes.

Head Coach Juan Dixon on Nykie Jackson: “Nykie is only scratching the surface of how special he can truly be. Nykie is a long, athletic, versatile wing defender who has NBA 3-point range. His skill-set is only going to continue to grow due to his work-ethic and willingness to learn.”

Appeared in 26 games and made one start in his first collegiate season at Saint Joseph’s University… Averaged 4.2 points and 1.5 rebounds in 16.2 minutes per game… Also credited with 14 assists and 11 steals while ranking second on the Hawks with 17 blocked shots… Made 37-of-130 (28.5%) field goals, 20-of-79 (25.3%) 3-pointers and 16-of-25 (64.0%) free throws… Scored in double digits three times with a season-high 12 points in games at Loyola Chicago and Towson… Pulled down a season-high six rebounds against the Ramblers and hit four 3-pointers against the Tigers… Added ten points in win over William & Mary and blocked a season-high three shots… Dished out three assists at Davidson… Helped Imhotep Charter win their third PIAA Class 4A state championship and the Philadelphia Public League title in 2019 … Played on three consecutive league and state title teams … Earned PIAA 4A All-State Second Team honors as a senior and Third Team accolades as a junior.

Head Coach Juan Dixon on Chereef Knox: “Chereef is an incredibly skilled and talented young man. His ability to not only space the floor, but to lock-in defensively and take on the challenge of becoming a perimeter stopper, is huge for our program.”

Played in 14 games, making two starts this past season at UTEP … averaged 2.6 points and 4.0 rebounds with eight assists, six blocks and 10 steals… Sat out the 2018-19 season per NCAA transfer rules… Played first two seasons at NJIT… Named First Team All-Atlantic Sun as a sophomore while leading the team in scoring (15.7 ppg) and ranked second in rebounding (6.2)… Scored career-high 27 points with nine rebounds at Kennesaw State and scored another 27 points at Lipscomb… Double-double 19 points and 12 rebounds at Rutgers along with a double-double 20 points and 11 boards at North Florida… Made the Conference’s All-Freshman Team during the 2016-17 season while averaging 9.9 points and 4.7 rebounds which included a double-double 13 points and ten rebounds in first collegiate game against Sarah Lawrence… Had three double-doubles on the year… Named the Montgomery Sentinel Co-Player of the Year and a Washington Post All-Met selection after leading Gaithersburg High School and the County with 26.3 points per game… Participated in the Crab Ball Classic and Capital Classic preliminary game… Did a prep season at Coastal Academy in Neptune, N.J … Honor Roll student

Head Coach Juan Dixon on Anthony Tarke: “Anthony is a difference maker on and off the court. His versatility offensively is only rivaled by the versatility he displays defensively We’re beyond blessed to welcome Anthony home for his final season of college basketball.”