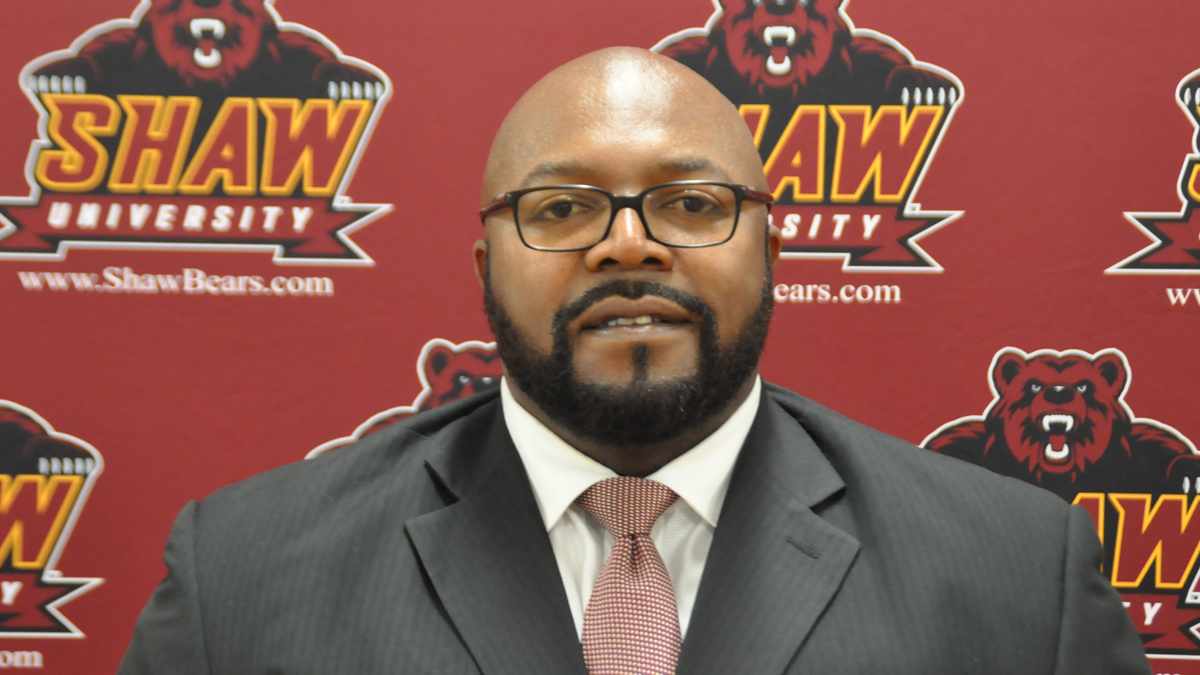 After winning championships at WSSU and Hampton, Shaw is hoping Bobby Collins can return it to CIAA respectability.

“We are delighted to have Bobby Collins as our Head Men’s Basketball Coach,” said Carter. “He brings with him a wealth of coaching experience. He is a proven winner and can get the job done on the court and off the court. I look forward to his commitment to both academic and athletic success which makes him the right fit to lead our men’s basketball program.

“I am very excited about joining the Shaw University family,” added Collins. “Shaw U has a pedigree of winning and I look forward to leading the program back to its winning ways.

Prior to South Carolina State, Collins was the head coach Maryland-Eastern Shore from 2014-2018, where he led the Hawks to their best record at 18-15 in 41 years of the men’s basketball program. The winning mark was the first above -.500 record for an Eastern Shore team since the 1993-94 season, while the third-place finish in the Mid-Eastern Athletic Conference was the best since that same year. The incredible turnaround year also saw widespread recognition of the accomplishments in Princess Anne with Collins winning MEAC Coach of the Year, as well as freshman Ryan Andino earning MEAC Rookie of the Year honors. Michael Myers also earned numerous awards, including Riley Wallace Player of the Year, while Collins was named 2015 Ben Jobe Coach of the Year.

The Southern Pines, N.C., native was at the helm when WSSU made the transition into the Mid-Eastern Athletic Conference (MEAC) before the 2007 season. He guided the Rams to 32 wins during that time, including a pair of 12-win seasons. In his first season, he was saddled with the duty of coaching the Rams as a Division I independent school and led the team to a 4-20 record.

It was the 2010-14 seasons that distinguished Collins as a premier head coach, where he went 79-35 after Winston-Salem State moved back to Division II. Those seasons saw him win at least 10 games in the Central Intercollegiate Athletic Conference (CIAA) each year and his teams made three appearances in the NCAA Division II Atlantic Regional Tournament during the span, including a CIAA Southern Division Championship in 2010-12 and Tournament title in 2011-12.

His best season with the Rams was during the 2012-13 season as the team went 21-7 overall, with a 13-3 record in the CIAA. That year, WSSU was ranked as high as No. 7 in the nation and earned a second seed in the NCAA Division Tournament.

Previous to his job with Winston-Salem State, Collins had coaching stints at Hampton University for 11 seasons, where he helped lead the Pirates to three Mid-Eastern Athletic Conference (MEAC) Championships.

A 1991 graduate of Eastern Kentucky University, Collins was a four-year starter on the men’s basketball team where he was named to the Ohio Valley Conference (OVC) All-Freshman Team and reaped Honorable Mention All-OVC as a senior. Following his graduation from EKU, Collins played professional basketball in Finland, where he earned MVP honors overseas in the Helsinki Classic Tournament in 1991.

753
The Latest in HBCU Sports and Culture