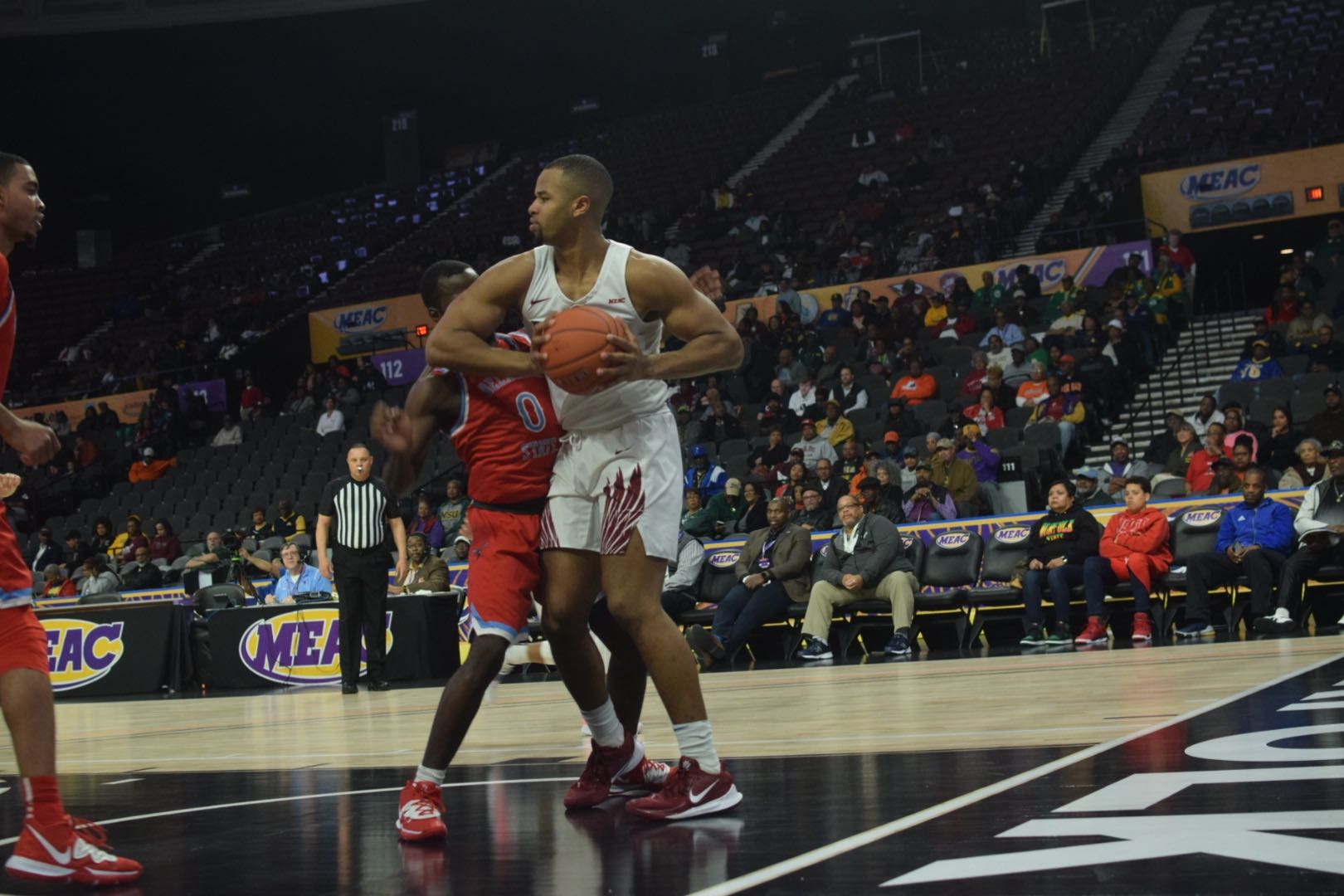 Delaware State made it interesting for a moment, but Eagles prevail

NORFOLK, Va., March 11, 2020–Top-seeded North Carolina Central roared to a big early lead, then saw its advantage sliced to single digits midway the second half before pulling away for a 92-75 win over eighth-seeded Delaware State Wednesday in quarterfinal action at the Mid-Eastern Athletic Conference (MEAC) Basketball Tournament at the Scope Arena.

The Eagles, the regular-season champion and winners of the last three tournament titles, earned a berth into Friday’s semifinal against the winner of Thursday’s matchup between fourth-seeded Bethune-Cookman and fifth-seeded Morgan State.

Eagles coach LeVelle Moton’s team improved to 18-13 with the win.

Redshirt junior C.J. Keyser came off the bench for 26 points, including a 6-for-7 effort from 3-point range, to power N.C. Central, which placed five players in double figures. Junior guard Jordan Perkins added 17 points and eight assists, while Jibri Blount, the MEAC Player of the Year, added 16 points and a game-high 12 rebounds.

Also reaching double-digit scoring for the Eagles were Nicholas Fennell and reserve Ty Graves, with 10 points each.

NC Central built a 25-point lead three times in the opening half, the last time at 45-20 with 2:36 left in the period before the heavily underdog Hornets scored the last 12 points of the half to cut the margin to 45-32 heading to the locker room.

“I thought we played incredible basketball the first 16 minutes of the first half, but we were equally horrible in the final four minutes when they went on a run and got back in the game,” Moton said.

Moton acknowledged that the Hornets’ run caused him some concern.

“I’m always concerned when you give up a big lead,” he said. “This time of the year (tournament time), teams are fighting for their life … nobody wants to go home. And I take my hat off to Delaware State because they put up a battle. They had 22 offensive rebounds, which created a lot of second chances for them.

“But I’m proud of the poise our players showed, especially Blount and Perkins, as they settled us down. That’s what great players do and we regained control of the game.”

The Hornets got 25 points from John Crosby and 15 from Myles Carter in the loss. Seldom-used Chris Sodom came off the bench to lead Delaware State on the boards with nine, to go with four points.

Despite the loss, Hornet head coach Eric Skeeters praised his team’s effort against NC Central and for its play throughout the campaign.

“All season, our guys never quit,” Skeeters said. “Despite facing adversity most of the year, we always played hard and we fought back today. I’ve never been more proud of a group of guys who showed grit and determination.”

The Hornets ended their campaign at 6-26.