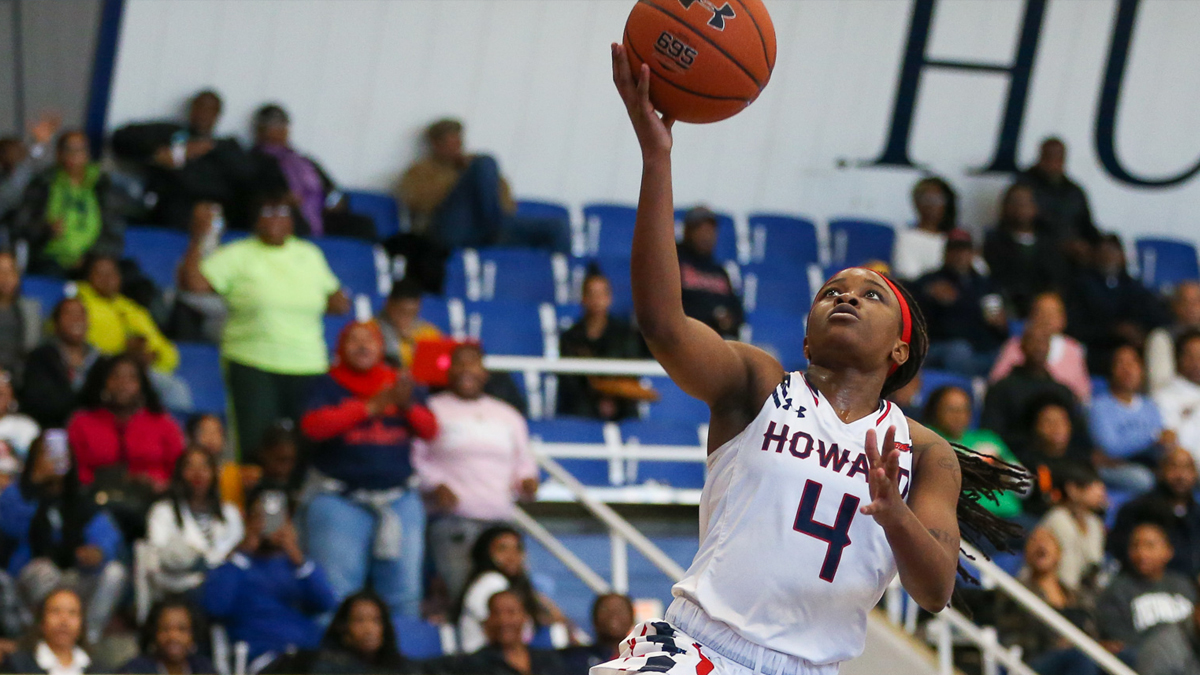 Howard basketball star Ayonna Williams uses the support of her Southeast DC “village” to leave her mark on the school and her city.

“It takes a village” is an African proverb that means an entire community of people must interact with children for those children to experience and grow in a safe and healthy environment.

While some may feel that it is somewhat overused, others may argue that it is a key to the success young people such as Ayonna “Yonna” Williams.

Ayonna is a senior member of the Howard University women’s basketball team who was raised in the Southeast section of Washington, D.C. and attended Ballou Senior High School.

The community is often noted more for its high crime rate and unemployment among young people than its successes. Ayonna’s story is a counter to that narrative.

It all started for Ayonna during her early years of involvement in sports and community activities.

“When I entered the ninth grade at Ballou, a group of family members, teachers, coaches and support in the community began to change my life,” recalls Ayonna.  “Everything from participating in sports to academics and staying the course, they were there for me every step of the way. I could see the value of them and began to listen and take advantage of all the opportunities that would help me.”

Ayonna would go on to excel in basketball at Ballou where she was named the D.C. Public Schools Player of the Year her senior season.

The Village Provides A Lift

Despite the success on the court, she received no serious offers from colleges or universities so her “village” again came into play. Her former coach at Ballou, Andrew Gaston, and the late Shellie Bowers, Jr., the late former Howard public address announcer and counselor at Ballou, contacted Shiryell Moore, who was then an assistant at Howard, to tell her of a talented player right here in the D. C. area.

“Howard came to see me play that late part of my senior season and came away impressed enough to give me an opportunity,” said Ayonna.  “There were really no other serious opportunities, so I talked it over with the people in my circle and we decided to take the offer.”

Ayonna came to Howard and she says that reality quickly set in for her. As a point guard, she came into a senior-laden team and had to play behind one of the best players at Howard during the past decade.

“It worked out well for me because Te’Shya Heslip helped me understand the difference between high school where I was able to have a lot of success and the college level where there are more and better players that you are competing with and against. Going against her in practice every day challenged me, and it helped me understand what I needed to do once my time came.”

Heslip is the last HU player to be named MEAC Player of the Year.

In addition to the challenges that she faced with the usual demands of the college life as a freshman student athlete, there were other challenges as well.

“There were times when she had moments of second guessing her decision,” recalls her mother Patricia Holtzclaw. “Plus, I think that having her father in and out of her life affected her. At times, she would have attitude problems. But because of the support and encouragement from all the people, it helped her stay focused and pursue her goals. I am so very proud of her. She will be the first of my five children to graduate from college.”

Williams says that the transition was made all the smoother because of the “village,” who came to all the Howard home games. The core group consists of family members and supporters, ranging from as young as four years old to 60, that can be seen and heard at Howard women’s games.

“It means a lot when you know that you have that kind of support,” she said.  “Win or lose or if you play well or not, they are there.”

Williams credits Heslip for her basketball education at Howard. She has shown marked improvement in several statistical categories from her sophomore year through her junior and senior seasons, culminating in her finest season in 2019-20.

She ranks third in the MEAC in scoring with over 15 points per game, leads the conference in three-point shooting percentage (43-percent) and in free throw shooting (85-percent) while ranking in the top ten in the MEAC in several categories including assists, steals and minutes played. She recently joined the coveted 1,000-point club in scoring. Recently, she made second team all-MEAC selection.

“I think I have improved overall,” she explains. “Playing the point guard position requires a lot but over time and because of circumstances with injuries and so forth, I have had to do more. Now, I must score and not just be responsible for what I do on the court, but for my teammates as well.”

She continued, “As for my improvement on three-point shooting, I could always shoot the ball; it’s just now that Sarah (Edmonds) has been out, I have had to do more in that area. And as for free throw shooting, I spend a lot of time working after practice, focusing on making all of the opportunities.”

Edmond is her senior backcourt mate and close friend, a second team All-conference selection and 1,000-point scorer who suffered a season-ending knee injury in January and has not played since.

Ayonna’s Village consists of 25-30 family members, friends, former coaches and community leaders who can be seen at all home games in a section in the Burr just to the right behind the Howard bench.

A sport management major, Ayonna is scheduled to graduate in May and has already begun to plan for her future.

Looking Forward To Giving Back

“Jimmy Black and Trayon White have had a big influence on my life,” she says.  “Jimmy is actively involved in the Southeast community where I live, and he is an entrepreneur. Trayon (Ward 8 city councilman) is always helping people in our community, encouraging them and trying to help make a difference. The hours that they put in every day is inspiring. Because of their influence, I want to become an entrepreneur and be able to continue doing the kind of things that they are doing and giving back to our community.”

Thursday’s Senior Night saw Ayonna, Edmond and the remainder of the seniors on the team play their last home game in Burr Gymnasium and were honored between games.

So what will she remember most?

“I will reflect on all the people who have helped me get to this point, family, coaches and community,” she says.  “Then I will think about my coaches and teammates.  We have been through a lot together, but it has helped me grow and form lifetime relationships.”

Williams is hoping to go out a champion. She and her Howard teammates knocked off Howard in the first round of the MEAC Tournament on Tuesday and will play host Norfolk State on Wednesday afternoon.

“Things have not turned out the way I would have liked in terms of success in basketball, but I can always say that every time I stepped out on the court, I gave everything that I had.”