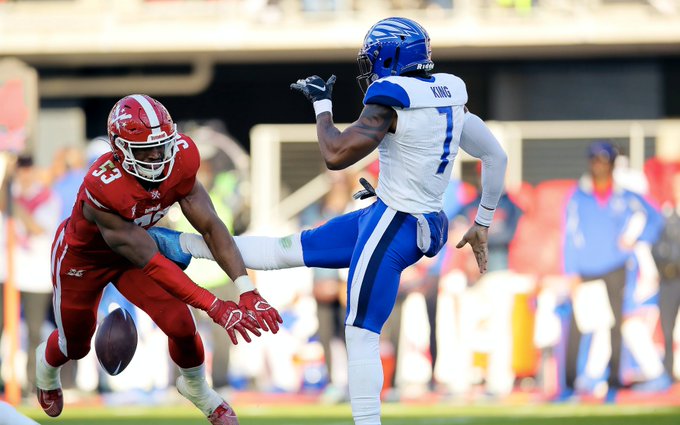 The D.C Defenders returned home from a two-game road skid and picked up a big win over the Saint Louis Battlehawks.

WASHINGTON, D.C. – After starting the season with back-to-back wins, the D.C Defenders hit an ugly two-game losing streak on the road and found themselves at .500 just as quickly as they went undefeated. This quick switch begged the question: will this be another local hot and cold team?

The Defenders returned home Sunday ready to quiet the concerns and defeated the Saint Louis Battlehawks, 15-6. The victory vaulted the Defenders to first place in the XFL East and pushed the then-first place Battlehawks to third.

The Defenders’ performance this week was a much needed all-around turn for the better. Their defense held the Battlehawks to six points after giving up an alarming 64 points through their last two games. Special teams stepped up with a blocked punt on Battlehawks punter and Fort Valley State alum Marquette King in the fourth quarter, which set up field position for a Defenders field goal drive.

Tyree Jackson entered the game and connected with TE Khari Lee, Bowie State alumnus, on the next drive for a nine-yard touchdown. This was the Defenders first passing touchdown in two weeks.

“The reason we won today is because we, every single player on this team, played together as one and contributed,” Defenders head coach Pep Hamilton said.

“The difference in how we are feeling now and how we felt the last two Sundays is togetherness. We won today because we played as a team.”

Now sitting at 3-2, the Defenders will remain home for week six and face the Dallas Renegades on Sunday at 3 PM.

The Renegades are currently 5-0 and are the only undefeated team in the XFL, posing a threat to the Defenders’ 3-0 home record.