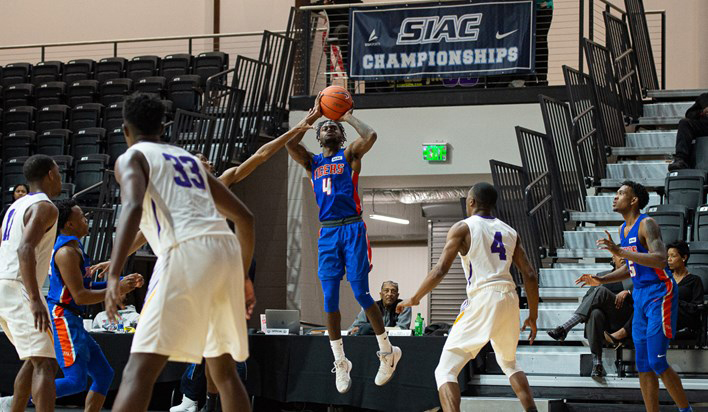 Miles advances to the semifinals of the SIAC Tournament.

ROCK HILL, S.C. – Although young and untested, the scrappy Savannah State men’s basketball team battled the number one team in the league to the end on Wednesday.

The Tigers concluded the 2019-20 season with a 64-85 loss to Miles College in the quarterfinals of the 2020 Southern Intercollegiate Athletic Conference (SIAC) Championship. Despite, the lop-sided final score, the Tigers battled hard through most of a physically tough game.

“I’ve got a lot of respect for Fred Watson and Miles,” Savannah State head coach Horace Broadnax said in a press conference. “He’s not only a great coach but a great program builder. Like I said to the guys in the locker room, that’s the standard of the SIAC as far as we’re concerned. That’s where we need to be. If we’re not working towards that level, then we’re fooling ourselves.”

The Tigers led 17-10 with 7:00 on the clock in the opening half, after Miles turned the ball over seven times. But Miles shifted into gear, opening up a 16-0 run over five minutes to take a 26-17 lead over the Tigers with seconds to the half.

Savannah native and Bethesda Academy graduate Avery Joyner notched in a 3-pointer with 51 seconds to play to cut Miles lead to 26-20 into the locker room, but all the momentum had shifted away from the Tigers.

The Golden Bears owned most of the second half, pushing out to as much as an 18-point advantage. With six minutes ticking away, the Tigers put on the press which helped open a small run as they continued to battle down the stretch.

Zion Williams hit three good free-throws and off the bench Joseph Boykin dropped a 3-pointer to cut Miles lead to 57-47 with 5:33 to play. But Miles held them back as Jelani Gayle-Watson stepped up to lead the Golden Bears on offense. Watson hit 30 of his 34 shots on the night.

Watson led the field on the night with 30 points, going 5-for-10 from beyond the arc, and 8-for-14 from the field. Joyner led the Tigers with 20 points on the night. Williams had 15 in the loss, and Marcus Scott added 12.

“The experience was good this year,” Scott said in the press conference. “A lot of ups and downs but we learned a lot as a team this year. Just need to focus on what we did wrong so we can fix it and be better next year.”

The young team, which featured almost entirely freshman this year with only two returners, will look to set the standard in the SIAC next year.

Savannah State ends their first season in NCAA Division II and the SIAC with one win in their first SIAC appearance after beating Spring Hill 79-66 on Monday. They conclude the season with an 11-13 overall record.

“We won one game in December and these guys could have laid down and had a horrible season,” Broadnax said. “We finished 10-9 in the East. We had the best record in the East (against East teams), 9-3.

“These two guys (Joyner and Scott) are freshman,” he continued. “My challenge to them is to get better and as a coach I have to get better. This was a good year. It was a transition year. Gave us an opportunity to take down some information and see what the league is all about. We’ll make an assessment and get to work.”