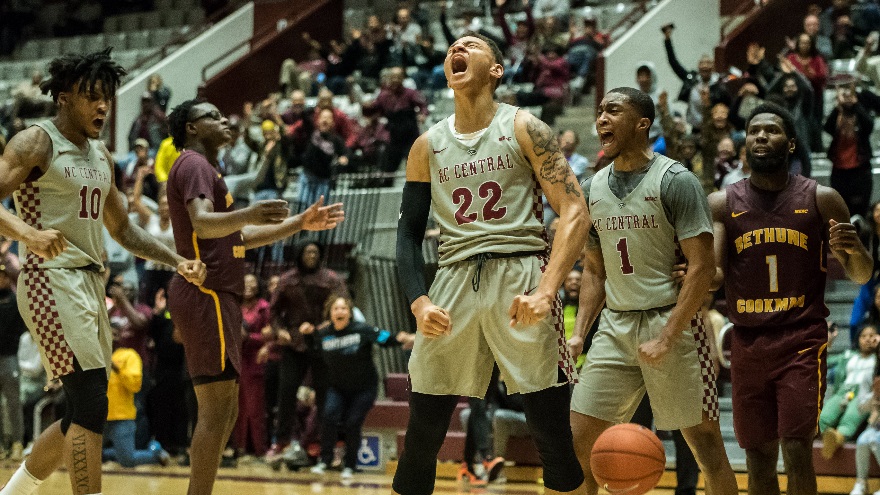 The no. 1 seed in the MEAC Tournament will come down to NCAT vs NCCU.

DURHAM, N.C. – North Carolina Central University recovered from an eight-point second-half deficit to go into overtime for a second consecutive game, and the Eagles were once again victorious as they staved off Bethune-Cookman, 71-68 inside McDougald-McLendon Arena on Monday, March 2.

B-CU (15-14, 9-6 MEAC) held control of the game in the first half as the Wildcats separated themselves from a tied ballgame with a 12-3 run to take an eight-point lead at 23-15 with eight minutes remaining in the first period.  NCCU (16-13, 12-3 MEAC) was able to trim the lead down to one heading down the tail end of the first 20 minutes, but the Wildcats kept pushing the Eagles away.

The Eagles picked up a key three-pointer from Ty Graves (Greensboro, N.C.) with 14 seconds remaining in the first stanza, and that sent the game to the midway point with the score standing at 31-29 in favor of B-CU.

The Wildcats started the second half like the first, and they outscored the Eagles 13-7 over the first six minutes to take a 36-44 lead.  Again, the Eagles kept knocking on the door, but the Wildcats refused to answer until Evan Clayborne (Dayton, Ohio) jammed in a game-tying bucket with 6:45 remaining to knot the game at 50-50.

In the waning moments of regulation, the lead changed hands twice, but it was the Wildcats clinging to a three-point lead with less than 40 seconds to go.  For the second time this weekend, it was Jibri Blount (Pittsburgh, Pa.) who fortified the Eagles in the clutch as he hit a trey with 29 seconds remaining to usher the game into overtime.

The win sets up a winner-take all scenario between two heated rivals in N.C. A&T (16-14, 12-3 MEAC) and the N.C. Central Eagles (16-13, 12-3 MEAC) on Thursday. The Eagles, the MEAC preseason favorites, defeated Bethune-Cookman on Monday to set up the showdown for the regular-season title 7 p.m., Thursday in Durham, N.C.

The Aggies are guaranteed at least one of the top two seeds next week at the MEAC Basketball Championship Tournament after Monday night’s win.

“A good win tonight against a gritty South Carolina State team,” said N.C. A&T acting head coach Will Jones. “They pushed us to the brink and I’m happy with the way the guys came out and responded.”

DOVER, Del. – Norfolk State drained 13 shots from beyond the arc and got a 24-point night from senior Jermaine Bishop in a 79-73 win over Delaware State in MEAC men’s basketball action at Memorial Hall.

Bishop had six of the team’s 3-pointers and shot 9-of-18 overall with seven rebounds and three assists. He led three players in double figures as NSU maintained third place in the MEAC at 11-4 with its second win of the year over DSU.

The Spartans never trailed and led by as much as 14 as they improved to .500 overall on the season at 15-15. The Hornets got as close as one point with six and a half minutes left in the game and were within a single possession several times in the last 10 minutes, including with less than 30 seconds left in the game. But a six-point halftime lead held up for the Spartans as Bishop had 18 of his 24 points in the first half.

Coupled with wins by North Carolina A&T and North Carolina Central on Monday night, and NSU’s losses to both those schools earlier this year, the Spartans locked up the third seed in next week’s MEAC Tournament. With a win on Thursday in the regular season finale, they can clinch a share of second place with Thursday’s N.C. A&T-NCCU loser.

WASHINGTON — Wayne Bristol Jr. scored 20 points and grabbed eight rebounds and Howard ended a 17-game skid with a 62-60 victory over Maryland-Eastern Shore on Monday night for its first Mid-Eastern Athletic Conference win of the season.

The Hawks closed to 58-57 on Bruce Guy‘s free throw with 3:05 left, but Bristol made two free throws and Nate Garvey added a layup for a 62-57 lead with 1:34 to go. Da’Shawn Phillip‘s 3-pointer with 13 seconds left made it the final score and the Hawks’ Canaan Bartley missed a jumper with 3 seconds left.

Charles Williams scored 18 points with six rebounds and Garvey added 14 points for the Bison (3-27, 1-14), who made 17 of 20 free throws, led by Bristol’s 8 of 8. Liwayne Richardson had nine rebounds and four blocks.