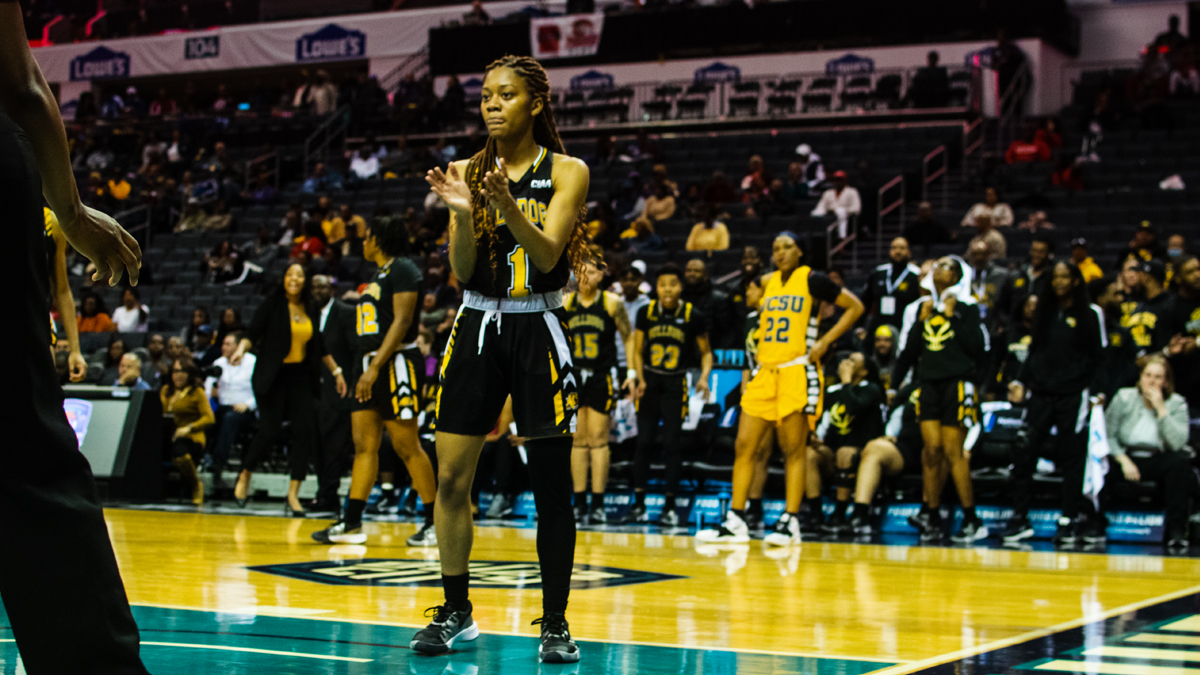 Bowie State trailed for the vast majority of its quarterfinal match-up against Johnson C. Smith… until it mattered most.

CHARLOTTE, NC– The name of the game in the CIAA Tournament is “survive and advance”. Bowie State exemplified that on Thursday afternoon. A buzzer-beater from senior Kyaja “JJ” Williams was BSU’s saving grace in its 49-48 victory over Johnson C. Smith.

Williams led the Bulldogs’ comeback with an 11-point, 10-rebound double-double performance. Five of those points came in the final two minutes of regulation during an 11-0 Bulldogs run to secure a comeback and a win. BSU started hot but quickly lost control with 7:39 left in the first quarter. JSCU did not surrender its lead until BSU’s lethal fourth-quarter run.

“Well I told them… if we don’t win that we’re going home at this point,” BSU Head Coach Shadae Swan laughed, “but I have to give all the credit, really, to the team. Our point guard [Chyna Butler] at one point in the timeout, she asked me for the clipboard and she started drawing stuff up telling us where we need to be on defense.”

“They all just said if we want it, this is about heart, and we have to strap down and play defense.”

Williams, the newly crowned CIAA Defensive Player of the Year, showed her offensive strength with her tough game-winning bucket. It’s not about the personal recognition for Williams, though.

“Whether it got in my hands or somebody else’s hand, I believe in myself and I also believed in my teammates…” Williams said when asked how it felt to hit the game-winner as a player just recognized for defense.

“Even if it wasn’t me and [was] somebody else, I would’ve really worked hard to try to get the rebound and go back up.”

Alongside the excitement of the big win, the victory was Coach Swan’s 100th win with Bowie State.

“I’m grateful that I was able to get it done… with my seniors, because that was my first recruiting class,” Coach Swan said when asked how it felt. “So there’s an honor to be able to get it done with that group. But honestly, it doesn’t mean [anything]. We’re just focused on winning the Championship right now. It’s just another game.”

BSU will remain focused on the Championship in its Semifinals appearance on Friday against a familiar opponent, No. 12 Virginia Union, at approximately 3 PM.