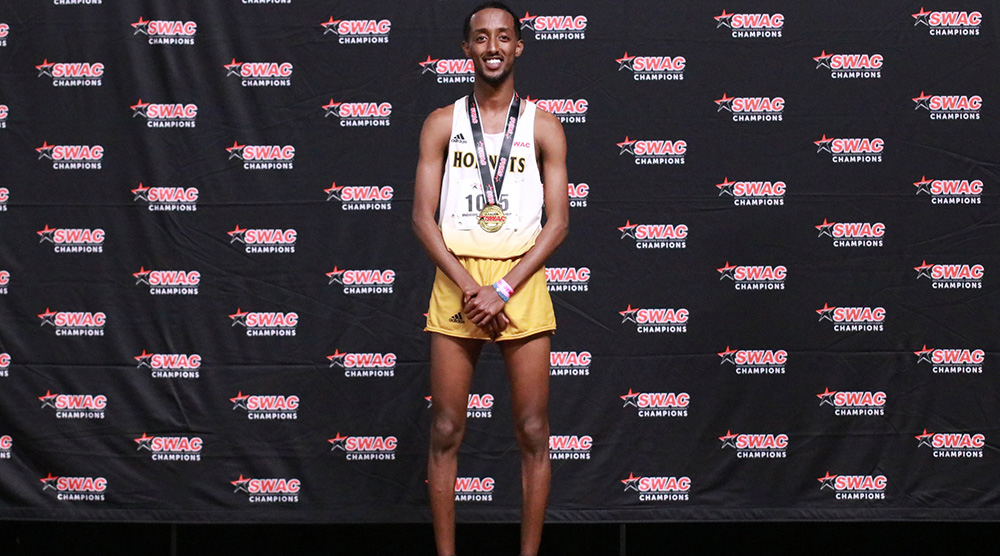 Both the men and women are in the lead after day one in Birmingham.

BIRMINGHAM, Ala. | On a day where records fell and personal bests were set, Alabama State vaulted their way to the top of the leaderboard on both the men’s and women’s side at the Southwestern Athletic Conference (SWAC) Indoor Track and Field Championships Thursday.

On the men’s side, after six events were scored on the opening day, Alabama State grabbed 71 points, taking a 19.5 point lead over second-place Prairie View A&M (50.5). They also lead Texas Southern (37) and Jackson State (32) heading into the final day of competition.

A trio of Hornets scored in the pole vault, led by Javaris Goins in third with a clearance of 4.05 meters, followed by Cedric Jones in fifth (3.85 meters) and Trahan in sixth (3.75 meters).

The men’s distance medley team won the fourth championship of the day for the Hornets, running a time of 10:18.49.

Several other student-athletes competed in preliminary events Thursday, with a pair advancing in the 60-meter dash. Norris Spike ran the second-fastest time of the day in 6.77 seconds, followed closely by teammate David East in third in a time of 6.80 seconds. The duo also advanced in the 200-meter prelims with East running the third-fastest time at 21.76 seconds and Spike the seventh-fastest at 21.97 seconds.

Trahan also advanced through the 60-meter hurdles prelims with a time of 8.09 seconds – the second-fastest time of the day. He is also third entering the final day Heptathlon after three events.

Meanwhile, on the women’s side, the Lady Hornets took an early lead in the meet with 49 points, leading Prairie View A&M (33 points) through five scored events. They also lead Southern (21), Alabama A&M (18), UAPB (18) and Grambling State (18) heading into the final day.

Bridgette Williams claimed a gold medal in the weight throw, beating her season-best with a throw of 18.88 meters to win the event. Teammate Kristen Thompson finished ninth overall in the event with a throw of 15.31 meters. She was joined on the top of the medal stand by the distance medley relay team who won their race with a time of 12:19.63.

Several other Lady Hornets scored on the day, including Arion Span in the 3000-meters with a time of 10:32.48. She was joined by Shayla Sanders (10:38.42) and Mariyah Archibald (11:01.44) who scored in the event. Meanwhile, Shamaria Lovett (second) and LaTe’sha Locker (third) scored for the Lady Hornets in the Heptathlon that was completed Thursday.

Alabama State had several student-athletes who qualified through the prelims in the sprints and middle distance, led by four Lady Hornets in the 60-meter dash. Charminiqu Hackney led the way with the fastest time of the day in 7.49 seconds, and she was followed by Nia Jack (third) in a time of 7.59 seconds. They were followed in qualifying by Kyana Evans (fourth) in 7.64 seconds and Shamaria Lovett (seventh) in 7.64 seconds.

Lovett also ran the fastest time in the 60-meter hurdles to qualify for Friday with a time of 8.43 seconds, while three other Lady Hornets qualified in the 200-meter dash led by Hackney with the second-fastest time of 24.42 seconds. Evens ran the fourth-fastest time at 24.74 seconds and Amari Newsome 24.82 seconds.

The meet concludes Friday at the Birmingham Crossplex.