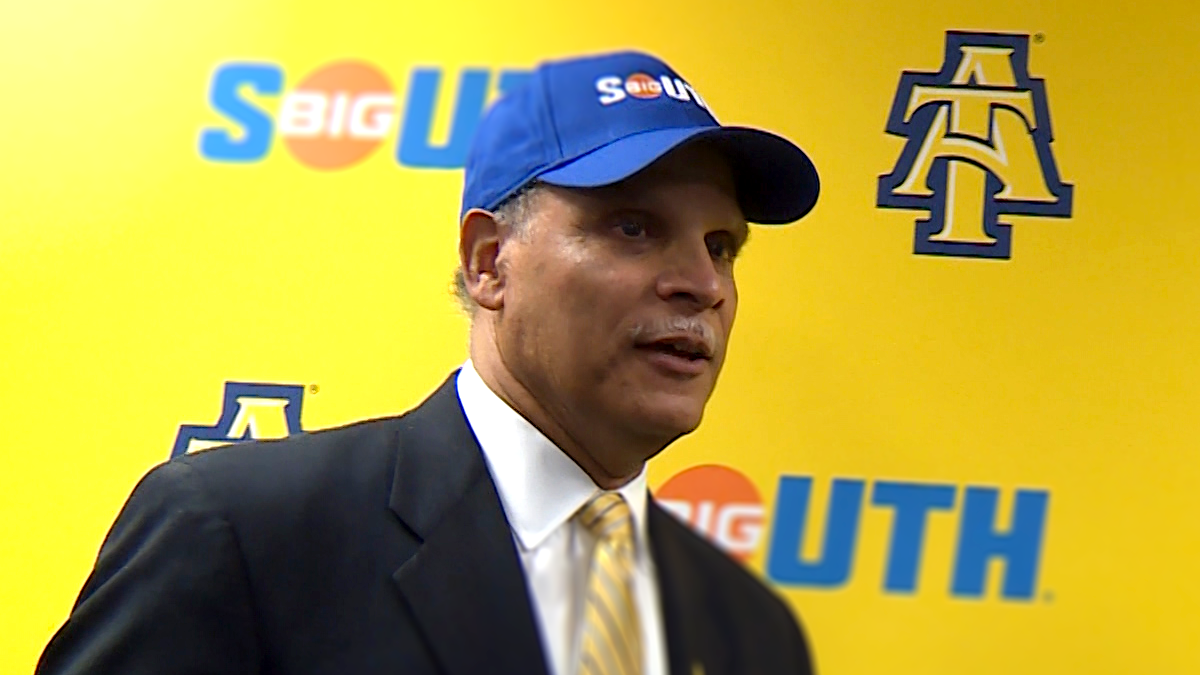 With only one dissenting vote the NCAT board approves leaving the MEAC.

By a 12-1 vote Friday morning, the school’s Board of Trustees approved the Aggies – one of the founding members of the MEAC in 1970 and the home of their athletics programs for the last 50 years – moving to the Big South, an 11-member Div. 1 conference primarily located in Virginia, North Carolina and South Carolina with an associate member for FCS football in Alabama, Georgia and New Jersey.

According to the Greensboro News & Record, the lone ‘no’ vote was cast by retired judge and A&T graduate Paul Jones, who said he was concerned that A&T alumni would not support the move because A&T will no longer share a conference with its traditional rivals.

“It is now signed and sealed,” said Martin at the press conference of the school’s move to the Big South which he said will become official on July 1, 2021. That means the 2020-21 season will be the Aggies’ final one in the MEAC.

NC A&T will be joining former MEAC member Hampton University who left two years ago to join the Big South. The move also represents the third defection from the MEAC in the past two years. Savannah State withdrew from the MEAC a year ago to re-join the Div. II Southern Intercollegiate Athletic Conference (SIAC).

The MEAC issued a statement Friday saying it wishes N. C.. A&T well on its new journey and pledged to work with A&T on its transition.

“The Mid Eastern Athletic Conference (MEAC) Council of Chief Executive Officers (CCEOs) chaired by Dr. Wayne A. I. Frederick, President of Howard University, wants to confirm that the current makeup of the MEAC member institutions are united to remain a viable and sustainable Football Championship Subdivision (FCS) conference and are committed to academic and athletic excellence for our students and student-athletes,” the statement read. “The MEAC will continue to explore conference expansion in the future, as we have done in the past, led by Dr. David Wilson, President of Morgan State University, who is the chair of the New Membership Committee.”

Down to eight football schools

With A&T’s defection in 2021, the MEAC will have ten member institutions, eight that compete in football.

Martin said the Board’s vote followed a unanimous recommendation from an 11-member Athletics Assessment Committee comprised of members of the Board, the Board of Visitors, the Aggie Athletic Foundation, the Athletics Hall of Fame and other constituents. Their work began last summer and intensified beginning in November 2019. They looked at proposals from as many as eight conferences, both Div. I FCS and FBS conferences, during their research.

Tim King, a retired Dow Chemical executive and past chairman of the Board of Trustees, chaired the Assessment Committee. He and Hilton both spoke at the news conference along with Big South Commissioner Kyle Kallander and Radford University President, Dr. Brian Hemphill, the chair of the Big South Membership Committee. Hemphill received his undergraduate degree from Saint Augustine’s University, a CIAA member, and is the former president of West Virginia State University, an HBCU that is a former member of the CIAA.

Martin, King, and Hilton emphasized that because of the proximity of Big South Schools, the move will give A&T student/athletes more classroom time and more time for other extra-curricular activities, a rationale also echoed when Hampton made the move.