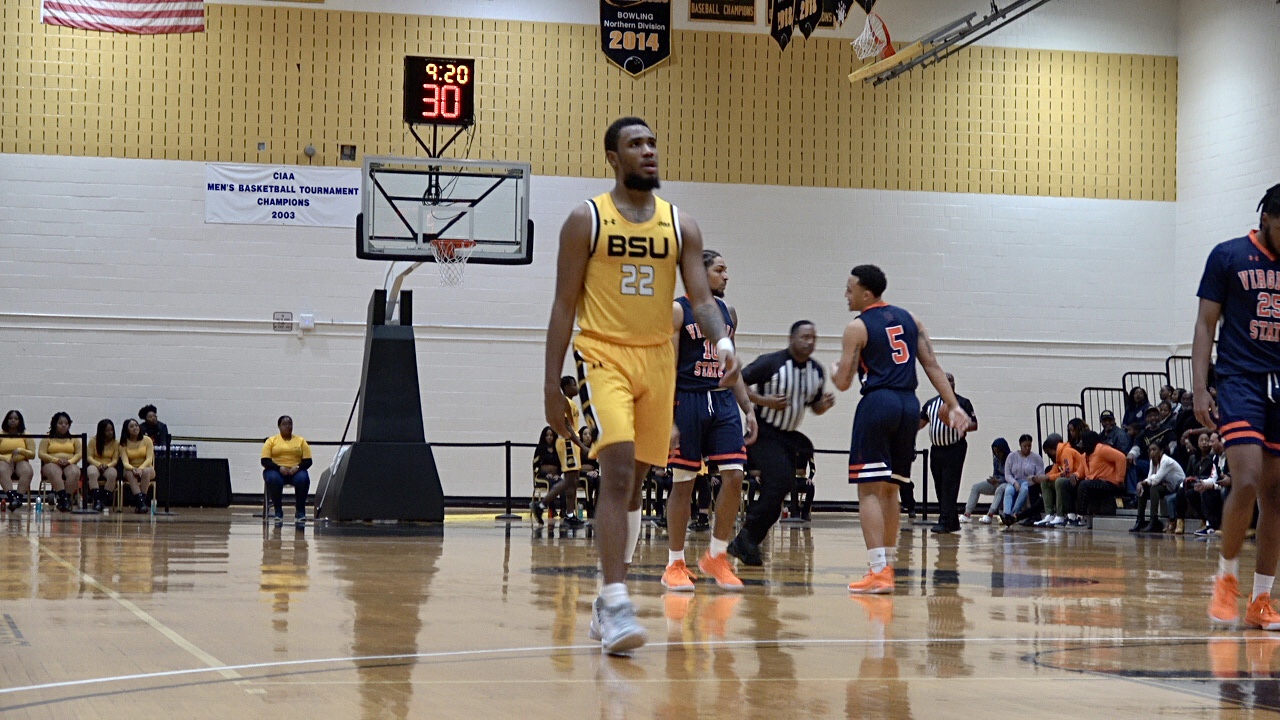 Virginia State rolled into town for a CIAA North matchup, but Bowie State defended its home court with two different, but equally impressive wins. The BSU women led the way with a landslide 70-40 win. The BSU men didn’t have it anywhere near that easy, but came out with the 86-81 win in double overtime over the top team in the division.

Bowie State (18-3, 2-1, 8-2) dominated the its second divisional match-up in less than 48 hours with a 30-point win. Senior forward Kyaja Williams led all scorers with 18 points and six steals.

Indicative of how the game will go, the Bulldogs started with an 8-0 run capped by a layup from Williams. VSU found the basket after five minutes, but was held to four first quarter points compared to 18 from BSU. The Bulldogs didn’t let up and opened their lead up to 21 points in the second quarter to go into halftime ahead 37-16.

The Lady Trojans outscored the Bulldogs 15-12 in the third quarter, but the small advantage didn’t make a dent in the preceded damage. VSU opened the fourth quarter with a layup, and BSU responded by putting its foot harder on the gas with 17 unanswered points. The Bulldogs put up a game-high 21 points in the fourth to charge its 70-40 win.

BSU improved to second place in the CIAA and won its 15th consecutive home game. The Bulldogs will host Elizabeth City State (8-14, 4-6, 1-3) on Wednesday evening attempt to push their win-streak to three. Tip-off is scheduled for 5:30 PM.

Bowie State (14-9, 6-4, 2-1) bounced back big from its fresh loss to VUU and left it all on the court for everyone to see. BSU senior guard Cameron Hayes’ 27 points off the bench led all scorers and throttled the Bulldogs to their gritty 86-81 double overtime win over the CIAA North leading Trojans.

VSU was first on the board after swift back-to-back jumpers. The Bulldogs quickly responded with eight straight points to kick off the exchanging scoring affair. The teams stayed neck-and-neck through the first half; a VSU three-pointer allowed a one-point lead with 11:19 left before halftime, but BSU instantly responded with five unanswered points. The Bulldogs kept its lead narrow in the first half and didn’t lead by more than four points. A layup from the Trojans right before the buzzer cut its trail to 33-31.

The Bulldogs and Trojans stayed withing three points of each other through the second half until BSU initiated an 8-2 run to take a seven point lead. VSU cut the trail with a layup and-one, but a BSU three-ball put the advantage back to seven with 5:45 left. The Trojans closed out regulation with a 14-7 run to send the game into overtime tied at 62.

BSU Junior guard Kani Coles opened up OT with a layup, but back-to-back visits to the charity stripe for the Trojans pushed them ahead by two. Coles hit a jumper to tie the game back, but a layup and-one response gave VSU a 69-66 advantage. Two successful trips to the line for Bulldogs swung the score back their way, until VSU hit a clutch three with eleven seconds left. Now down 72-70, Hayes drove and hit the game tying jumper to send the game into double overtime. In second OT, BSU was ready to end it and opened with a strong 10-0 run. The Trojans responded with seven unanswered, but couldn’t match the double-digits. BSU came out on top after it was all said and done with the 86-81 victory.

The Bulldogs earned their second place spot back in the CIAA North after their win over the Trojans. BSU will host Elizabeth City State (12-10, 4-6, 2-2) to wrap up its three-game home stand on Wednesday, February 5. Tip-off is scheduled for 7:30 PM.