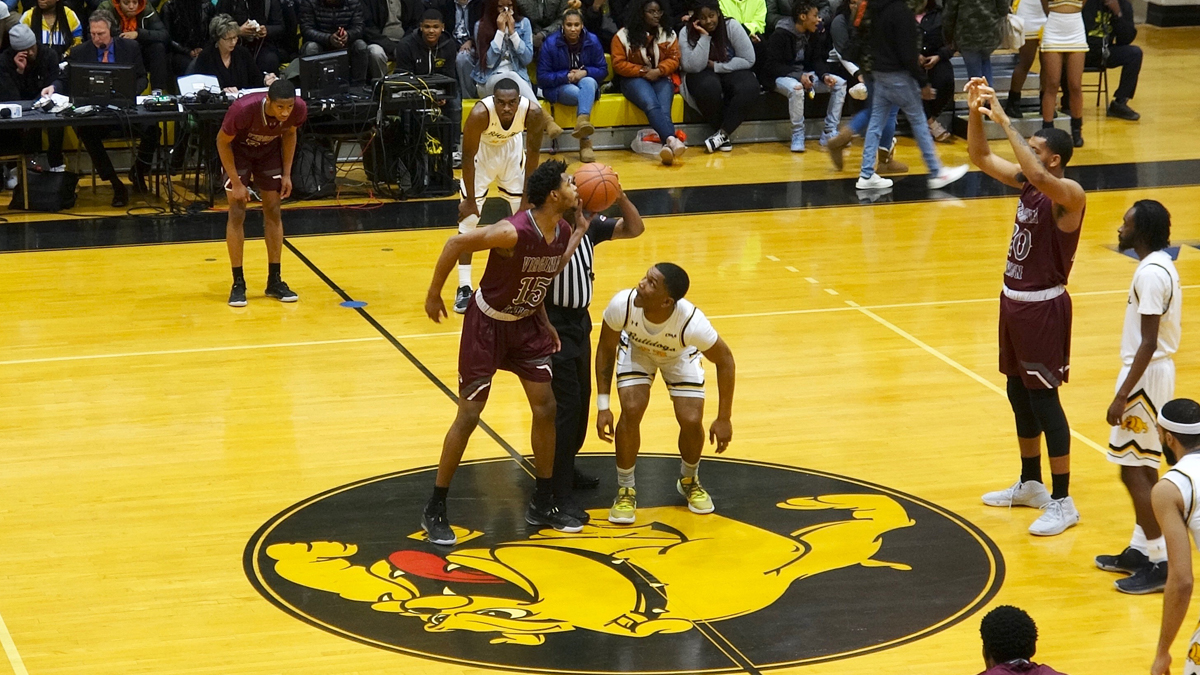 Bowie, Maryland- We’re officially less than a month away from the tournament and you can feel it in the air. Bowie State hosted Virginia Union in electrifying CIAA North action on Thursday night. The women ignited the doubleheader with BSU’s 49-44 upset victory over nationally ranked No. 10 VUU. Subsequently, the men couldn’t pull off the home sweep and lost more than the game. Union snagged the 82-71 redemption win and took the Bulldogs’ second place spot in the division.

BSU (17-3, 7-2, 1-1) haven’t lost a home game this season yet with its 14-game home win streak dating back to last season. It came down to the wire, but a late fourth quarter rally was the deciding factor in the upset victory over #10 VUU. BSU’s junior forward Talanya Hutton led all scorers with 17 points and three blocks.

The visiting Lady Panthers opened the game with a three-pointer and ignited a 10-1 run in under three minutes. BSU then responded with a back-to-back jumper and three-pointer, but couldn’t contain Union’s early spark. VUU closed the first quarter with a pair of free throws to push ahead 18-9. The Lady Panthers opened their lead to ten after another free throw to open the second quarter. Now kindled, BSU went on a lengthy 11-3 run and cut its trail to two points with just over two minutes left before halftime. Union wouldn’t quit, though, going into halftime ahead 27-22 after its own responding run.

Hutton opened the third quarter with a three-pointer that incited an 11-5 Bulldogs run for their first lead of the evening, but it wouldn’t be that easy. Union responded with seven unanswered to push BSU behind again to close the third quarter, 39-33. The Lady Panthers seemed to have the game decided after their back-to back- three-pointer and jumper opened a six-point lead with three minutes remaining. The Bulldogs wanted this win, though, and didn’t let Union score after that. 11 unanswered BSU points gave the Bulldogs a gritty 49-44 victory.

BSU will host Virginia State (8-14, 4-6, 0-3) on Saturday afternoon and try to extend its home win streak to 15 games. The Lady Trojans are the last team to beat the Bulldogs at home, back in January 2019. Tip-off is scheduled for 2 PM.

VUU (12-10, 5-4, 2-2) set the tone early with an energetic start and finished just as strong, taking the road win and snatching second place in the CIAA North from BSU. Union’s Terrell Leach showed why he leads the CIAA in scoring with an impressive 30-point performance.

The Panthers got off to an early 11-0 lead, capped by a three-pointer from Leach, after a sloppy start from the Bulldogs. BSU regrouped with a 17-6 run to tie the game at 17 with ten minutes left before halftime. The teams tied twice again in the half at 27 and 35 points. Union took the lead back with a free throw, but two unanswered layups sent BSU into halftime with a 39-36 lead.

Union came out the with two quick buckets to take a one point lead, 40-39. BSU responded with nine unanswered to open its lead back up and kept the advantage over VUU though the first ten minutes, until momentum drastically shifted. Leach ignited the switch hitting three big free throws with 9:56 left to cut Union’s trail to two points. BSU responded with its own triplet of free throws, but VUU stayed locked in. The Panthers closed out the game outscoring the Bulldogs 26-10, highlighted by a daunting 13-0 run that sent BSU fans filing out with four minutes left. BSU succumbed to its scoring drought, giving VUU the 82-71 road win.