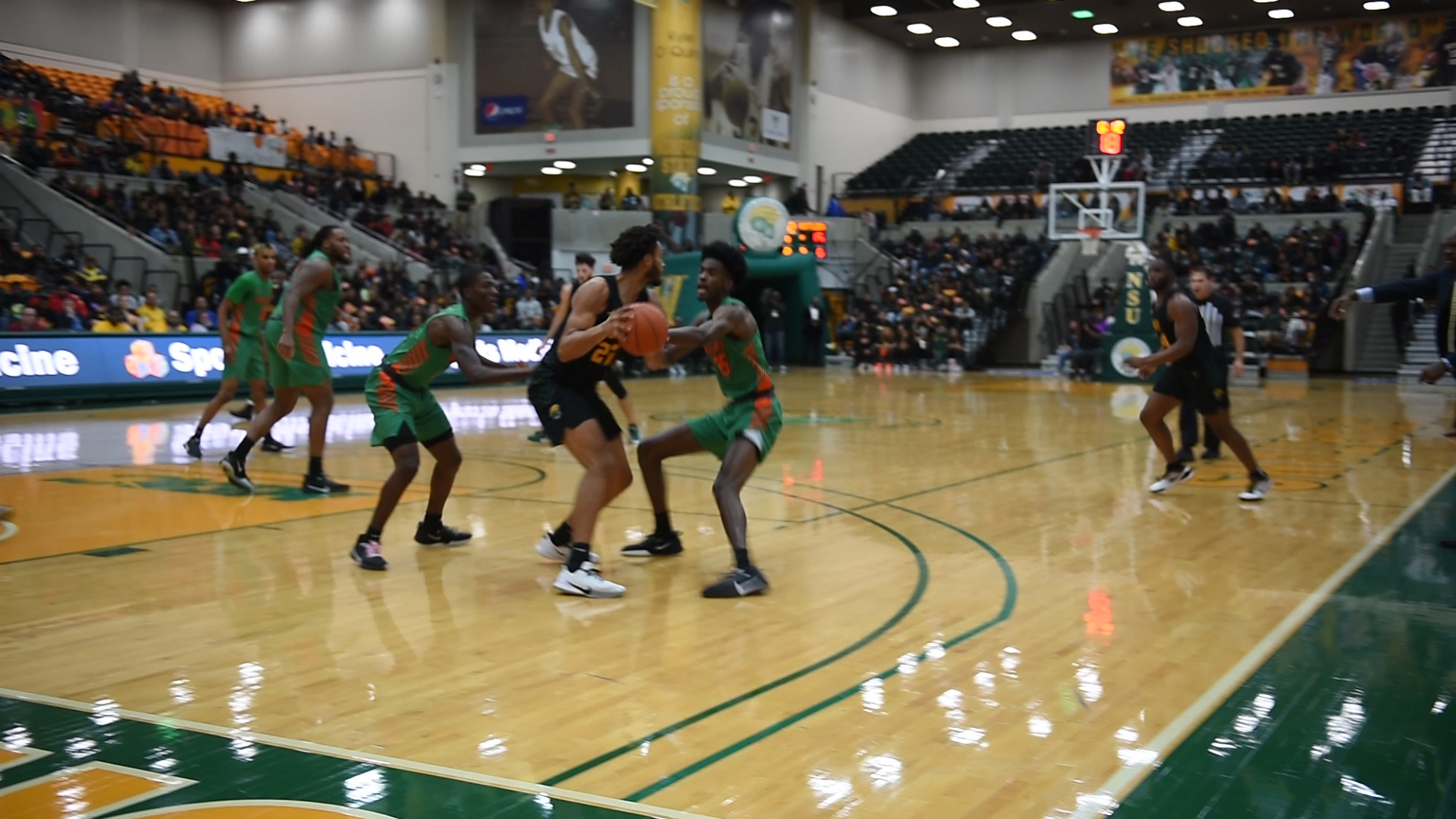 Five game Monday in the MEAC

Norfolk State blows by FAMU to remain perfect in the MEAC

NORFOLK, Va. – NSU had one of its best shooting nights as a Division I program, and the Norfolk State men’s basketball team cruised to a 95-67 win over Florida A&M on Monday evening at Joseph Echols Hall.

A 60-percent shooting night gave the Spartans plenty of highlights in a game televised live on ESPNU. They stayed perfect in MEAC play at 6-0 and moved one game closer to .500 overall at 10-11.

It was just the 13th time since the program moved to D-I in 1997 that NSU shot at least 60 percent in a game, and the first time doing so in five years. The Spartans got balanced scoring for the evening, as just three players scored in double figures despite a season high for points against a D-I team.

They led by as much as 34, threatening the program’s 35-point record for the largest margin of victory in a MEAC game. Jermaine Bishop led the way, tallying 20 points on 8-of-12 shooting, 4-of-6 from deep.

The game starting off as a back and forth affair, at least for the first seven minutes of the contest. But the Spartans turned the corner from there. Buckets by junior Devante Carter, senior Steven Whitley and sophomore Joe Bryant Jr. started an initial 11-0 run, and it eventually stretched to a 21-4 spurt that lasted almost seven minutes. Whitley finished it with a bucket and two free throws, the latter with 5:37 to go in the half.

That made it 32-15 in favor of the Spartans. After the Rattlers got a few points back, NSU scored the last six points for a 42-23 lead at the break. The Spartans made 58 percent for the first half, holding FAMU to 32 percent shooting.

After Cletrell Pope gave the Wildcats (10-11 overall, 4-3 MEAC) a 66-65 lead, French connected on consecutive three-pointers to give BCU a 72-65 advantage with two minutes left.

Bailey added a field goal and was 4-4 from the line to help the Wildcats keep the Bulldogs (9-10, 4-3 MEAC) at bay and snap a two-game losing streak.

Bailey finished with a game-high 17 points, while French and Pope had 15 points each for the Wildcats, who led 37-25 at halftime. French was 6-6 from the floor.

GREENSBORO, N.C. — Kameron Langley had a triple-double with 15 points, 12 assists and 10 rebounds to lead North Carolina A&T to an 82-67 win over Delaware State on Monday night.

The Aggies improve to 2-0 against the Hornets this season. NC A&T defeated Delaware State 98-77 on Jan. 13.

PRINCESS ANNE, Md. (January 27, 2020) – David Syfax had 11 points and five rebounds off the bench and Malik Miller came up just shy of a double-double with 10 points and nine rebounds to help the Bears rally past Maryland Eastern Shore 56-50 for the Bears’ second straight victory.

Eastern Shore has lost five in a row.

The Bears were down 23-15 at halftime before extending their defense and forcing turnovers in the second half.

The Bears were down 25-15 after Phillip scored on a jumper to open the second half scoring. Morgan State responded with an 11-0 run over the next four-plus minutes to take the momentum.

The Hawks found themselves in a 5-minute drought – starting the second half connecting on just 1 for 6 field goals.

Five game Monday in the MEAC