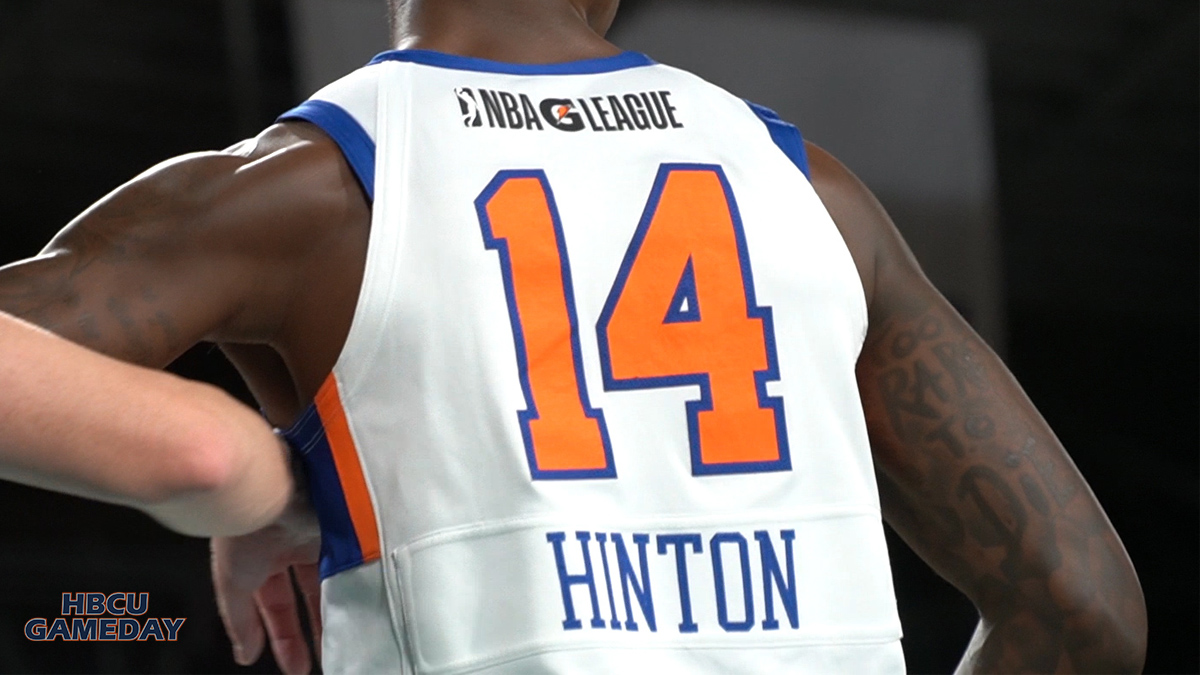 Knicks Amir Hinton following his dream in the G League

A year ago Amir Hinton was tearing it up in the CIAA. Today he’s making an impact in the G League and only a few steps from the NBA.

Despite going in and out of the rotation and experiencing the grind of the season, Amir Hinton still remains joyful and maintains a cherubic smile on his face. The Philadelphia, PA native is aware of his journey and is grateful to be here.

“It’s amazing,” said Hinton, while speaking following the Westchester Knicks 108-104 loss to College Park Skyhawks. “To be put in this position, to be able to play basketball and doing what I love to do, I have to take full advantage of this and have fun and enjoy it while I’m here.”

Making the jump from playing Division II basketball at Shaw University to signing with the New York Knicks over the summer was not the most conventional route, but it makes sense.

After leading the nation, averaging nearly 30 points per game, it was evident that Hinton skills should be on display at the next level. With the opportunity to play in Westchester, the former Central Intercollegiate Athletic Association (CIAA) Player of the Year, not only looks to put his alma matter back on the map, but also show that the skill from Historically Black Colleges and Universities (HBCU) are just as good, if not better.

“It’s not a difference,” the Westchester guard added. “If you can play basketball and if you got that God given talent, you can do whatever you put your mind to, whether you went to D-1, 2, 3, or even if it was 4. I’m excited to represent HBCUs players. A lot of them contact them me and stuff like that, so I’m excited to be representing for them at this level.”

With Hinton landing with the Knicks this season, the New York G-League affiliate has become a bed for HBCU athletes over the years. Last season, the Westchester Knicks signed Tyrius Walker of Morehouse College and Phil Carr of Morgan State University. “That’s exciting seeing the league putting the head into HBCU’s and looking and seeing where the talent is at,” Hinton states.

The Knicks are currently the only NBA franchise with a Black GM and President of Basketball Operations in the NBA. Its director of player personnel, Harold Ellis, played three seasons in the NBA after starring at Morehouse. The franchise has a long history of taking in HBCU alumni from Willis Reed and Earl Monroe to Charles Oakley and recently former Norfolk State standout Kyle O’Quinn.

Although Hinton has seen a slight decrease in his minutes since the beginning of the season, he continues to be a proflic scorer during his brief time on the floor. Averaging nearly nine points a game, the Shaw product has poured in double-digits in six of the Westchester Knicks contests, including a career high 24 on opening night against the Lakeland Magic.

The former Abbington High standout relishes this opportunity and looks to be the next HBCU athlete to reach the league joining the likes of O’Quinn and Robert Covington of the Minnesota Timberwolves.

Knicks Amir Hinton following his dream in the G League