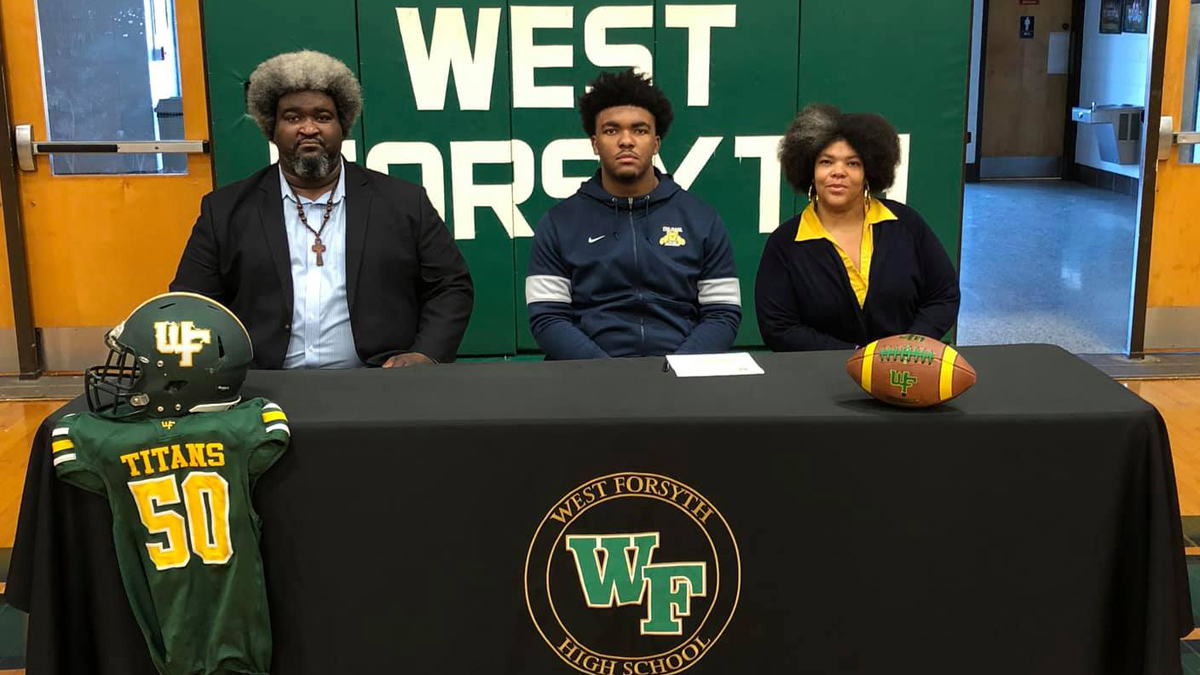 When Shannon Brooks was a student at North Carolina A&T in the 1990s, she spent many a Saturday watching the line of scrimmage at Aggie Stadium as her future husband, Steve, played for the blue and gold. The Brooks family will get a feeling of deja vu the next few football seasons watching the next generation take the field.

Isaiah Brooks signed his letter of intent to play at A&T on Thursday. Brooks is a 6’5, 300 pound offensive tackle, rated three stars by 247Sports, who received interest from ACC and SEC schools along with an FBS offer before choosing to go to his parents alma mater.

Brooks played three seasons of left tackle at West Forsyth in Clemmons, NC after starting at right guard as a freshman. He began receiving interest at the end of his sophomore season from schools like Virginia Tech, Arkansas and other FBS squads as well as hometown Wake Forest. He was eventually offered a scholarship to East Carolina, but a coaching change (coincidentally following a loss to A&T in 2018) re-opened his recruitment.

Brooks recieved offers from other FCS schools as well, including A&T’s arch-rival North Carolina Central as well as Gardner-Webb. But he said he really liked the atmosphere in Greensboro, and the fact that the program has been consistently strong in recent years.

“A&T is top in the MEAC and top players in the FCS,” he said. “It’s a great program, better than a lot of the programs in the FBS.”

Brooks isn’t just a standout on the field, he’s also a solid student. So much so that he will be finishing up his high school course work in December and plans on enrolling at A&T in the spring.

“I’m looking into meteorology, or if I don’t like that, I’ll look at going into biology. I want to show that I’ve got brains, I’m more than just a jock. A lot of times you look at athletes, they major in stuff that’s always sports related…sports marketing, sports this, sports that…so I want to show that I actually got brains and know more than football. Because the NFL isn’t guaranteed and I’ve always gotta have a Plan B, like my mom always told me to have a Plan B.”

His mother found herself in awe of Wednesday’s signing ceremony and the entire experience.

“Today has been somewhat like a dream come true for me,” Shannon Brooks said. “Me and his dad, we’ve never pressured him into making him feel like he had to go to A&T, we just wanted him to go where he would be happy. So to know he chose A&T on his own…that’s good enough for me.

She said that after meeting the coaching staff, she feels confident that her son, who she affectionately calls her “beast” will be in good hands in Greensboro. And she’s looking forward to cheering him on, just as she did his father.

“I never would have imagined 25 years ago that as a student at A&T that I would fast forward and have my child who actually decided to go to A&T and I’ll be sitting right out there cheering him on like I cheered his father on.”