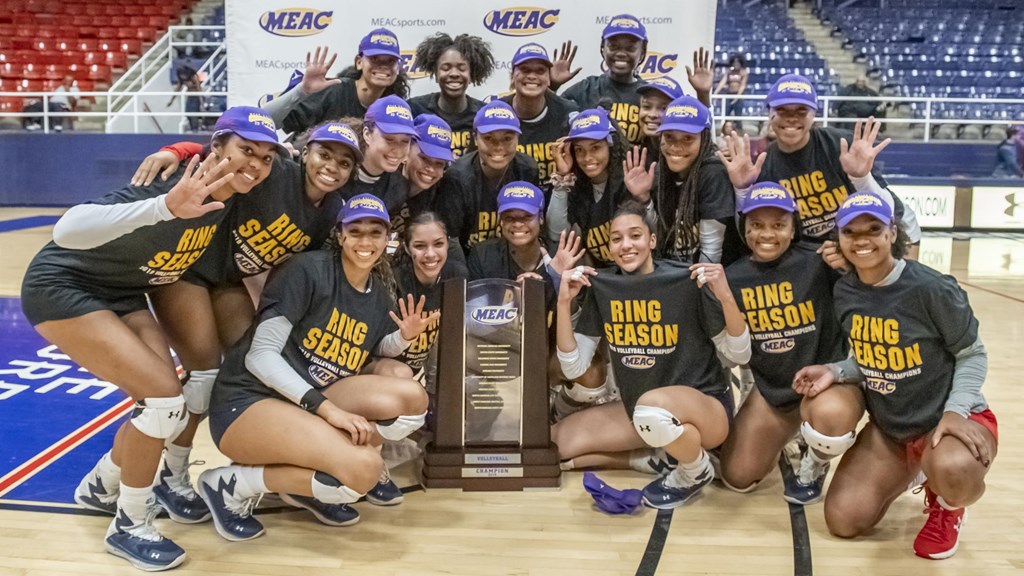 Howard earned the MEAC’s automatic bid to the NCAA Volleyball Championship. The NCAA Selection Show is Sunday, Dec. 1 at 8:30 p.m. on ESPNU.

Semira Blair had 32 assists, and Kayla Diaz added 30. Fola Wilson had 21 digs to lead the Bison on defense.

“I’m really proud of our team,” Howard head coach Shaun Kupferberg, the tournament’s Outstanding Coach, said. “This was the best-played match I’ve seen in a long time. Obviously, there were some sloppy parts, but for the most part, players were hitting high and aggressive and hard time after time… every time you had a free ball, there was something coming back hard at you.”

Morgan State (18-13) jumped out early, taking the first set 26-24 after a Sophie Pajevic ace and a Zoe McBride kill. But the second set proved to be one for the ages, as the packed Burr Gymnasium crowd and ESPNU audience were treated to high-flying, back-and-forth volleyball.

Blair had an ace to give Howard a 24-20 lead in that set, but Morgan State scored the next five points to go up 25-24 after a Roi Wallace ace. Eleven tie scores followed, and neither team could take advantage of set point for the longest time.

But with the score tied at 35, the Lady Bears made rare back-to-back miscues to give the Bison the set and tie the match at 1-1.

“I think Kira and I were trying to do a good job of keeping everybody focused and calm,” Tipton said, “because it’s real easy to get frantic and out of sequence in moments like that.”

“It was really important to stay motivated,” Porter added, “especially since the first set can set the tone.”

Morgan State jumped out to a 9-3 lead in the third set and rode that momentum to a 25-17 win, taking a 2-1 lead in the match – and threatening the MEAC’s longest run of volleyball dominance since Florida A&M won championships from 2001-09.

But Howard had an answer, narrowly taking the fourth set 25-23 – despite Kupferberg’s reservations.

“There were times in the fourth set I thought we’d lost it,” Kupferberg said. “But they scraped it together and got us to a fifth set, and once we were there, I felt good about our chances.”

Morgan struck first in the fifth set on a McBride kill, but Howard bounced back immediately and led 6-2 after a Tipton kill. Porter and Myca Mitchell paired on a block later in the set to force match point at 14-11, but Tylar Roberson had a kill to cut the lead to 14-12.

Tipton ended things on the next point to trigger the celebration and euphoria.

McBride, the MEAC Co-Player of the Year, led Morgan State with 24 kills and 13 digs. Roberson added 21 kills of her own to go along with 18 digs. Jennevy Santos had 32 digs, while Roi Wallace racked up 67 assists.