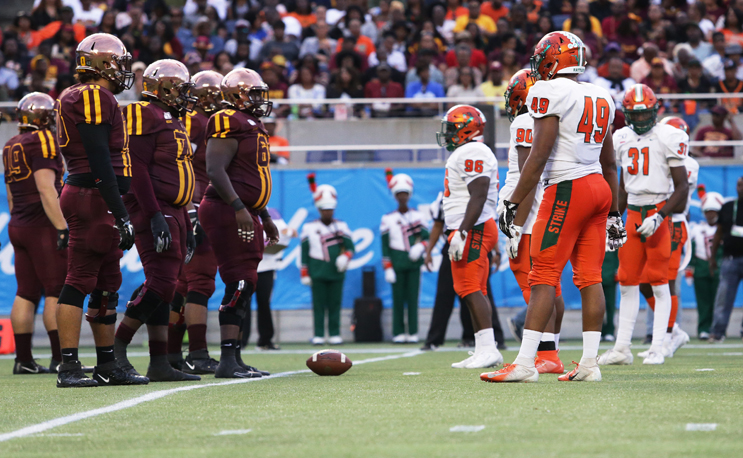 FAMU had perfection in its grasp but was once-again foiled by a resurgent BCU squad.

The Florida A&M Rattlers were one win away from going unbeaten in MEAC play.

The Bethune Cookman Wildcats ruined the pursuit of that goal.

BCU pulled off a 31-27 upset against FAMU during the 40th Florida Classic on Saturday in front of a crowd of  55,730 at Camping World Stadium, the highest attended game since 2011.

This was the ninth consecutive Wildcats win over the Rattlers in the series.

“Hard-fought football game between two state rivals. It got down to the end, we just didn’t make the plays we needed to get it done,” head coach FAMU Willie Simmons.

BCU running back Issac Washington rushed for a game-winning 15- yard touchdown with 2:14 left to play. Washington had 12 carries for 104 yards.

After playing to a 7-7 tie close to the first quarter, BCU posted consecutive touchdowns.

The Rattlers cut the deficit to 21-20 on a rush by Wide Receiver Azende Rey. He lined up in the wildcat on fourth and two.

While trying to lead his squad downfield in the final seconds, Stanely was intercepted by Derwin James.

In the press conference, Stanely’s voice was breaking and he paused as he tried to answer questions as tears flowed from his eyes.

He expressed gratitude for his time at FAMU.

BCU signal-caller Akevious Willimas who finished with 22-of-35 passing for 269 yards, one touchdown, and one interception. The rest of the BCU senior class finished their careers without losing to FAMU.