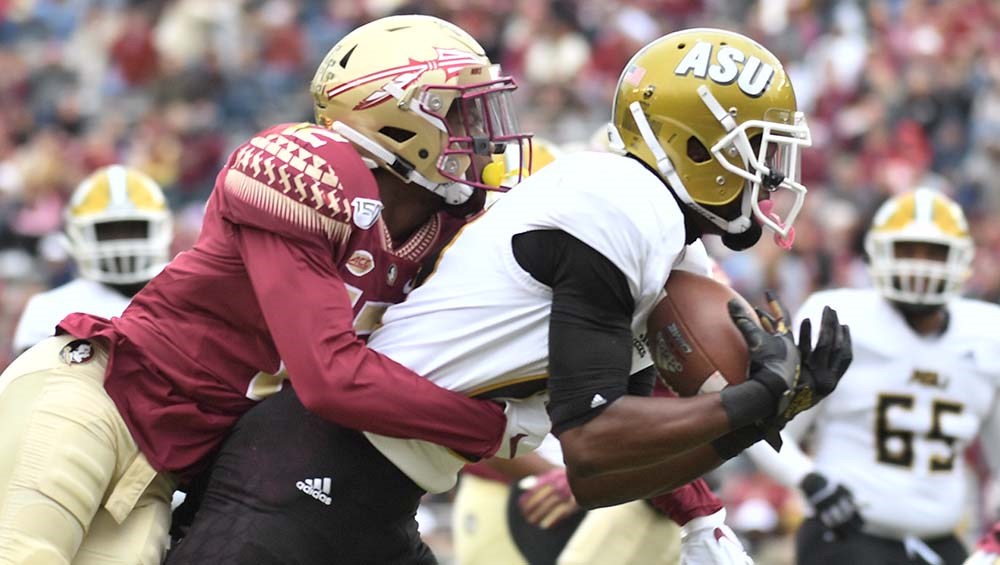 Bama State got on the board first against the Noles

KHA’Darris Davis finished the day 27-for-39 with a touchdown and an interception and throwing for 262 yards. The Hornets connected with 10 different receivers including Jahod Booker six times for 84 yards. Michael Jefferson (67 yards) and Tyrek Allen (18 yards) each finished with five receptions, while Duran Bell recorded four in the loss.

Joshua Hill led Alabama (5-5) with seven tackles, while Keenan Isaac added six. Freshman Irshaad Davis finished the day with an interception and a forced fumble for the Hornets.

The Hornets were able to get on the board first on the opening drive of the game following a 44-yard kickoff return from Ezra Gray to set Alabama State up on the 49-yard line. Following a personal foul call on Florida State, the Hornets used six plays to get down to the Seminoles’ one-yard line, before a 19-yard field goal from Hunter Hanson gave the Hornets a 3-0 lead with 12:31 remaining in the opening quarter.

It didn’t take long for Florida State to answer after the kickoff, using a one play – a 69-yard touchdown pass from James Blackmon to Tamorrion Terry – to push Florida State ahead 7-3 with 12:22 remaining in the opening quarter. They added to their lead with a four-yard touchdown run by Khalan Laborn with 8:00 remaining in the quarter, after Blackmon kept the drive alive by avoiding a sack and running down the sideline for a 20-yard gain to put the Seminoles up 14-3.

Alabama State had a chance to get the first points of the second quarter, following a 13-play, 53-yard drive that used over six minutes of clock. However, a 38-yard field from Hanson was pushed wide right and kept the deficit at 11 with 14:10 remaining in the half. Florida State took advantage of the miscue and went 79 yards in six plays, using a 39-yard touchdown pass to Tre’Shaun Harrison for a 21-3 lead with 11:55 to play in the half.

The Hornets were able to get on the board with 5:48 to play in the half, halting the 21 unanswered points by Florida State, with a 35-yard field goal by Hanson to cut the deficit to 21-6. They used a 12-play, 47-yard drive that consumed just over six minutes on the clock.

Florida State was able to extend the lead with 1:02 remaining in the third quarter when Hamsah Nasirildeen picked off a pass and returned it 80 yards for a touchdown, giving the Seminoles a 35-12 lead. They added two touchdowns late for the final margin.

Alabama State will return to action at home on Thanksgiving, hosting Prairie View A&M in Southwestern Athletic Conference (SWAC) action at the annual Turkey Day Classic. Kick is set for 2 pm at ASU Stadium, with pregame set for 1:30 pm on the Hornet Sports Network.