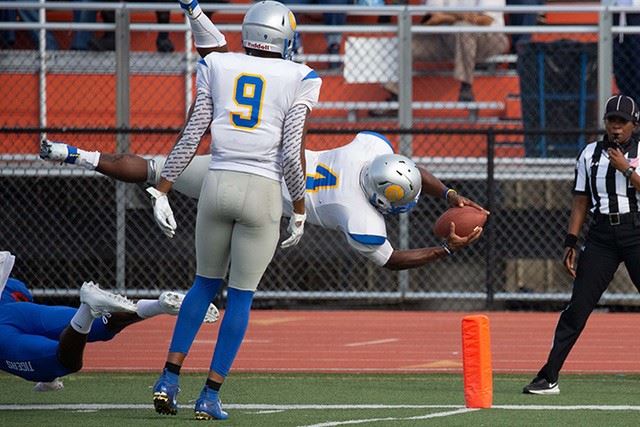 Albany State finishes off Fort Valley, back in SIAC Championship

Golden Rams are back in the SIAC Championship game

COLUMBUS, Ga. – A close rivalry at the halftime quickly turned against the Wildcats in the early moments of the second 30 minutes. Albany State blocked a second punt for a touchdown and added two more scores in the opening 7:23 of the third quarter to take control and eventual 42-6 victory over Fort Valley State in the 30th Annual Fountain City Classic.

The Wildcats’ Marlon Fleming plunged into the end zone from a yard out with 22 seconds left in the first half to pull within 7-6. The FVSU momentum heading into the intermission did not continue into the third quarter.

The Golden Rams’ Malachi Brown blocked his second Wildcats punt after FVSU fell a yard short of the first down sticks and his teammate recovered in the end zone for the touchdown. On FVSU’s third play on the ensuing possession, ASU forced a fumble and scored on its first offensive play and the FVSU nightmare third quarter was on. Albany State added two more touchdowns on its next two times with the ball for a 35-6 margin, which FVSU could not recover.

With the win, ASU (7-3) wins the Southern Intercollegiate Athletic Conference East Division with a 5-1 Division record. FVSU finishes with a solid 6-4 season, four more victories than it recorded in 2018 and the most wins under head coach Kevin Porter in his four seasons.

The Wildcats running back Jamari Clark was named FCC FVSU MVP for his 83 all-purpose yards with 54 yards rushing on 19 carries and four catches for 29 yards.

Albany State finishes off Fort Valley, back in SIAC Championship