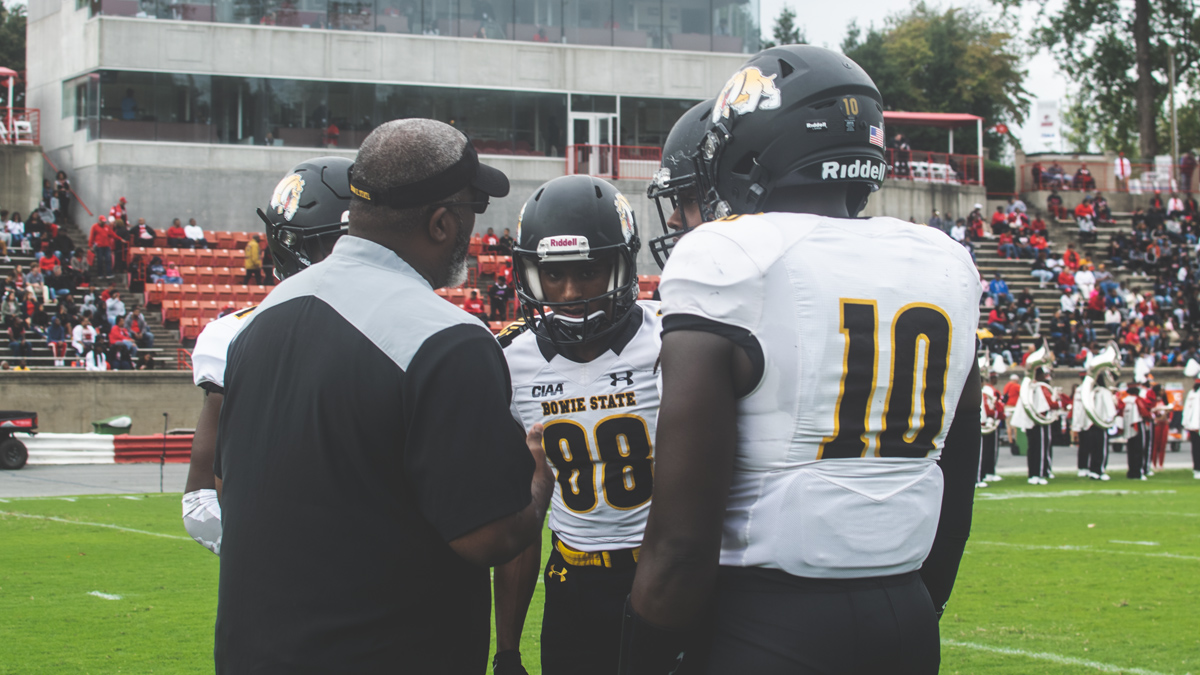 #15 Bowie State hosted #25 Virginia Union for a nationally ranked face-off and control of the CIAA North on Saturday afternoon.

BOWIE, MD- There aren’t many ways to lose when your offense totals over 500 yards and defense doesn’t allow any second half points. Fifteenth-ranked Bowie State dominated Virginia Union on Saturday, coming up with a 52-17 victory.

Junior quarterback Ja’rome Johnson had a big day though the air, completing 23 of 28 passes for 395 yards and five touchdowns. Sophomore defensive back Demetri Morsell had a big game as well with two big second-half interceptions.

VUU capitalized on a scoop-and-score fumble on BSU’s first play of the day to take an early 7-0 lead. Receiver Montez Clay caught a 15-yard touchdown pass on the Bulldogs’ next drive to tie the game. VUU managed to get to BSU’s one-yard line, but was held to a field goal to take the 10-7 lead. Johnson quickly responded with a 80-yard touchdown pass to redshirt freshman receiver Darius Bowman to take a 14-10 lead with 3:27 left in the first quarter. Another Johnson-Clay touchdown pushed the Bulldogs up 21-10 in the second quarter, but a quick 75-yard bomb from the Panthers to the end zone cut their trail to four points. Receiver DuShon David caught a 13-yard touchdown pass to send BSU into halftime up 28-17.

The Bulldogs sealed the deal in the second half. Running back Calil Wilkens ran a nine-yard touchdown on the opening drive to push the lead to two scores. A field goal on the next drive opened the lead to 38-17 with five minutes left in the third quarter.

BSU then went on to intercept VUU on three consecutive drives. Morsell grabbed the first pick in Panthers territory to set up the Bulldogs offense for a quick 13-yard touchdown from Johnson back to Davis. The Panthers opened the fourth quarter driving and got in the red zone, but Morsell pounced again for a devastating 92-yard house call to push the lead to 52-17 with 12:17 left. Defensive back Will Flowers grabbed an interception on VUU’s next drive, but the teams exchanged punts to conclude the game.