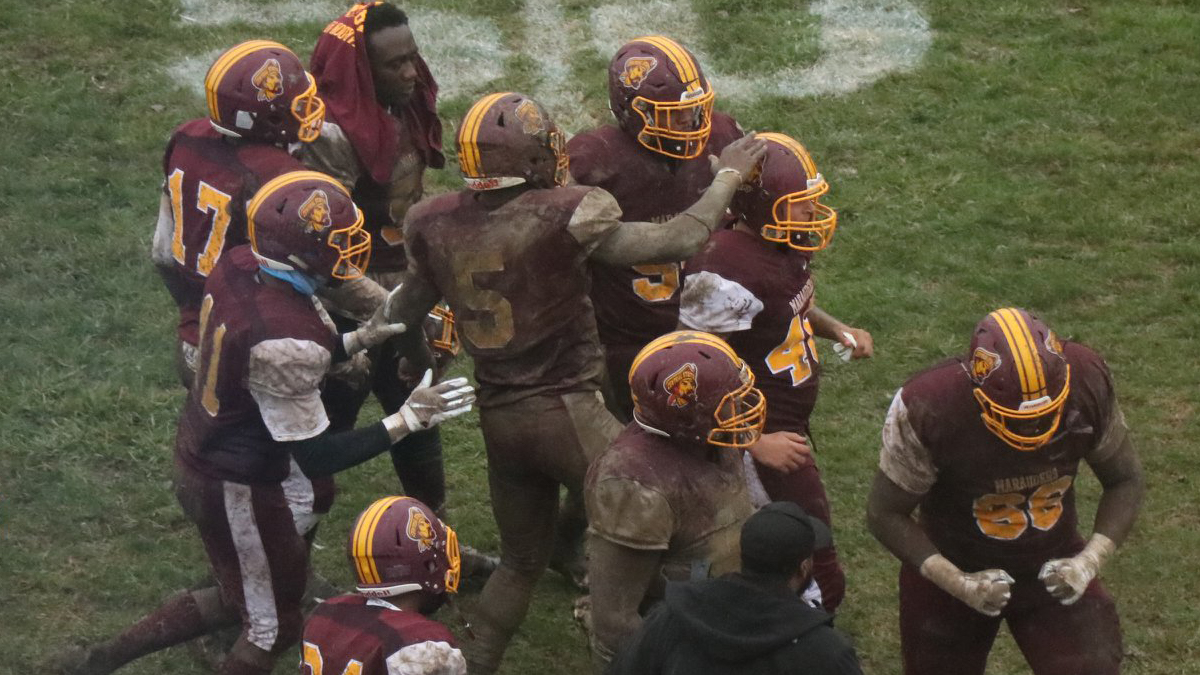 The elements and the Marauders proved to be much for the Golden Bears.

WILBERFORCE, Ohio – The Central State Marauders fought through the rain, wind, and mud to upset the Miles Golden Bears, 15-13, on Saturday.

A late field goal by freshman kicker Joshua Nunes sealed the dramatic victory for the Marauders, who improve to 3-5 overall with a 2-2 record in SIAC play. Miles, the defending SIAC champions, fall to 6-2 on the year with a 3-1 mark in conference play.

With rain, wind and a slick playing surface hindering both offenses, field position proved to be crucial throughout Saturday’s contest.

Miles took advantage of good field early in the second quarter. Beginning their drive on CSU’s 43-yard line, a 24-yard run by Donte Edwards set up a misdirection run for a score by quarterback Daniel Smith to give MC the lead (MC 6-0).

MC held CSU to just 32 yards of total offense to maintain their 6-0 lead at halftime.

MC took a two-score lead when defensive back Jairius Shade stepped in front of a Derell Williams pass and return it 27 yards for the Golden Bear touchdown at the 10:16 mark of the third quarter (MC 13-10).

Williams made up for his mistake on CSU’s next possession by scrambling to the open field and running 63-yards to the end zone to bring CSU back within seven (MC 13-6).

After forcing a three-and-out, CSU took over on its own 36-yard line. With completed passes at a premium, Williams found a streaking Dalane Brown II down the middle of the field. Brown II fought his way through tacklers for the final five yards to break the plane for the score. After a failed two-point conversion attempt, CSU trailed by one point with 7:09 to play.

Facing a fourth down with two yards to go from their own 48-yard line, MC opted to go for it with 2:33 left on the clock. CSU linebacker broke through the line to stop Edwards in the backfield to give his team the ball with excellent field position and a chance to take the lead.

After three straight plays of minimal success, CSU lined up in a punt formation. A direct snap to Darius Thomas proved successful as the senior ran 12 yards for the first down to extend the drive.

Passes to Brown II and Saffold allowed CSU to get down to MC’s 10-yard line. A sack by Jaylun Thomas on third down knocked CSU back to the 17-yard line. With 27 seconds left, freshman kicker Joshua Nunes found stable ground on the field and knocked the ball through the uprights as the CSU sideline erupted in excitement (CSU 15-13).

CSU’s defense held MC for the final 21 seconds of the game as the players began celebrating in the mud as time expired.

Saturday marked Central State’s first win over Miles since the 2013 season. CSU is 2-5 in the all-time series against MC.

Kailen Abrams led the CSU defense with 12 tackles, one forced fumble and a fumble recovery.

Senior Darius Thomas recorded his second rush of his carrier. Both carries have been on fake punts and have led to first downs for the offense.

Saturday marked one of the final times CSU will host a game on natural grass. The school has announced plans to upgrade the stadium with field turf and a new track surface for next season.

Miles entered Saturday leading the SIAC with 410 yards of offense per game. CSU held MC to 224 yards total and their lowest point total of the season.

“When Josh (Nunes) hit it clean, I was confident it would make it. It was a good snap by Robert Munday. Derell (Williams) put it down and Nunes had an outstanding kick.” – Head Coach Cedric Pearl

“With some key players out, every guy on the field stepped up today and made plays for us to come out on top. Our defense played outstanding. I commend Derell Williams for doing whatever we ask him to do. He stepped into the role of quarterback today and made a big play with his feet and another with his arm in a throw to Dalane Brown. He is an incredible athlete.” – Head Coach Cedric Pearl

“On our fake punt, we had originally planned to lineup in an offensive formation. After a timeout, we felt like we could catch the off guard. We direct snapped it to DT (Darius Thomas) and he did exactly what he did the last time we called his number. His run allowed us to eventually hit the field goal to win the game.” – Head Coach Cedric Pearl

“Today is an outstanding victory. It really means a lot to beat a program that has had the success like Miles College. They have three championships over the last eight seasons so to beat a program with that type of resume is outstanding for this program and our student-athletes.” – Head Coach Cedric Pearl

“Today was a great win. The defense, offense and special teams came together to allow us to come out on top.” – Junior linebacker Kailen Abrams

“Playing a game in today’s type of conditions is exciting for me. It is kind of like a throwback game and a defensive battle out there. I always have a lot of fun playing in the mud and making plays.” – Junior linebacker Kailen Abrams

“I thank our guys upfront for opening up the offensive line and allowing me to penetrate the backfield to make the play on the late fourth-down stop. I will remember that play for a long time.” – Junior linebacker Kailen Abrams

“This win means a lot for us as seniors. We have never beaten them and the games really have not been that competitive so to get the win today means the world. Coach Pearl prepared us all week for the conditions today. We focused on ball handling and security throughout the week and it paid off today.” – Senior center Darius Thomas

“That was the biggest kick of my football career up to this point. It feels great to deliver for my teammates. Our defense stopped them and the offense was able to get us great field position and the line did a great job of blocking to allow us to get the kick off.” – Freshman kicker Joshua Nunes

“Every week, we try to simulate those moments. As a kicker, it is all repetition and being consistent. When I kicked it and watched it in the air, I knew it was going in.” – Freshman kicker Joshua Nunes

The Marauders will continue conference play on Saturday when they travel to face Lane College in Jackson, Tennessee.