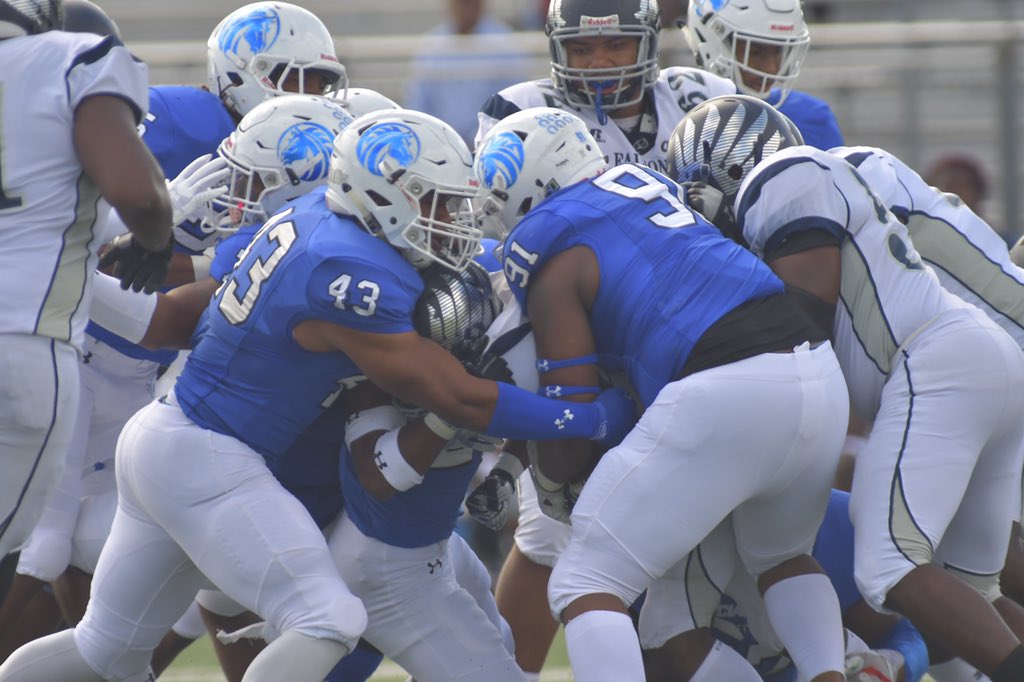 The game, and essentially the season, is never over until the clock hits “final.” That’s the resonating lesson with Saint Augustine’s 23-21 upset win over CIAA South-leading Fayetteville State on Saturday.

SAU had the only first quarter points with a 39-yard touchdown pass from Gillard to receiver Joe Baker to take a 7-0 lead. FSU responded with a short rush in end zone to tie the game with 12:51 left in the second quarter. SAU orchestrated two great drives, but couldn’t find the end zone. Labat kicked a 39-yard field goal with 6:33 left and a 29-yarder right before halftime to give the Falcons a 10-7 lead.

FSU scored the only third quarter points with another rushing touchdown to take its first lead, 14-13. SAU’s Gillard found receiver Anthony Barry for a 48-yard touchdown with 8:11 left in the game to retake the lead at 20-14. The remainder of the quarter was quiet on the scoreboard until the last minute. FSU found the end zone on a short pass to go up 21-20 with 59 seconds left, but SAU would not lay down. The Falcons created a six-play, 66 yard drive in 48 seconds to get deep in FSU territory. Labat kicked the 26-yard game winner and gave the Falcons the 23-21 victory.

SAU receiver Anthony Berry had five catches for 105 yards and a touchdown, and running back Jeremiah Miller finished with 93 yards from 19 carries in the victory. The Falcons will host Johnson C. Smith on Saturday and conclude the season visiting Shaw on November 10.

Who wants the South?

So what does this game mean for the South now? FSU didn’t lose its first place spot with the loss, but its grasp is a lot less secure. The Broncos have no more room for error and have to win its last two in order to go back to the Championship. FSU will finish the remainder of its season on the road: against Livingstone on Saturday and visiting a hungry Winston-Salem State on November 10.

Winston-Salem State (4-4, 3-2, 3-0) now has a clear-cut opportunity to take the division. Currently on a three-game win streak after its 21-0 win over Livingstone, it got hot at the right time in the season. WSSU will have to continue this and win out to take the division. The opponents will have something to fight for; WSSU hosts Shaw next Saturday for Homecoming, then concludes its season at home against FSU.

Shaw (4-4, 3-2, 2-1) now has a hand in the fight, but its path to the top is a little more complex. The Bears are on a two-game win streak after topping Johnson C. Smith on Saturday, but will need some outside help to take the conference crown. Shaw needs to win out and will need FSU to drop its remaining two games due to losing the head-to-head match-up. The Bears will finish the season on a road tour, trading blows with WSSU this weekend and visiting SAU on November 10.