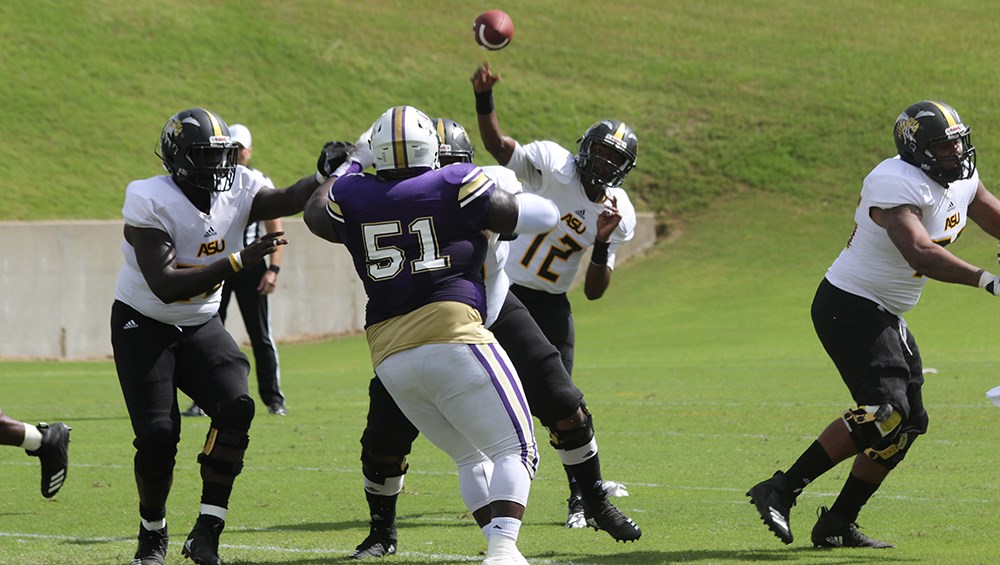 Alabama State can earn plenty of respect with a win over Alcorn State at home on Saturday.

But something strange occured on October 6, 2018. The Hornets went into Lorman, Mississippi for Alcorn’s homecoming and did the impossible. Despite being heavy underdogs, the Hornets stunned the Braves 28-25 in not one, not two, not three but five overtimes. Despite dominating the game statistically, Alcorn State was handed its one and only conference loss of the season by a team that nobody expected. The Braves outgained the Hornets 530-240, doubled Bama State’s first downs but due to three turnovers and six missed field goal attempts they lost in shocking fashion.

Fast forward almost exactly one year later and the teams meet again but this time The Hornets are to be taken seriously. Alabama State in the early part of this season seems to be one of the most improved teams in the SWAC. The Hornets started the season with a near upset over FBS UAB, got a win over heated rival Tuskegee and beat traditional SWAC power Grambling two weeks ago.

The Hornets are no longer in the conference’s basement in offensive and defensive production and things are looking up down in Montgomery. The Braves come into Saturday’s game after two straight conference wins at home over Prairie View and Mississippi Valley and the Braves haven’t been at 100 percent in either win. Noah Johnson, DeShawn Waller, Juan Anthony Jr., and several other Braves have been sidelined due to injury for the past few weeks. If you think that means that the Braves are vulnerable, think again! Quarterback Felix Harper has stepped into the starting role in Johnson’s absence and has been phenomenal. Harper has stepped in and passed for 809 yards, 10 touchdowns and only two picks. Freshman running back Niko Duffey has stepped in for DeShawn Waller and looks to be the next great Alcorn running back with 344 yards on the ground so far this season.

Alcorn State has waited on this game for the last year. It was embarrassed, upset, and angry at the results of last year’s homecoming. Alabama State has waited on this game since last year. Even though the Hornets upset the Braves a year ago many believe that it was a fluke and that Alabama State simply got lucky. This year the stakes are higher. Both teams are currently unbeaten in conference play so the winner on Saturday will have a nice cushy spot on the top of the Eastern Division Standings for now.