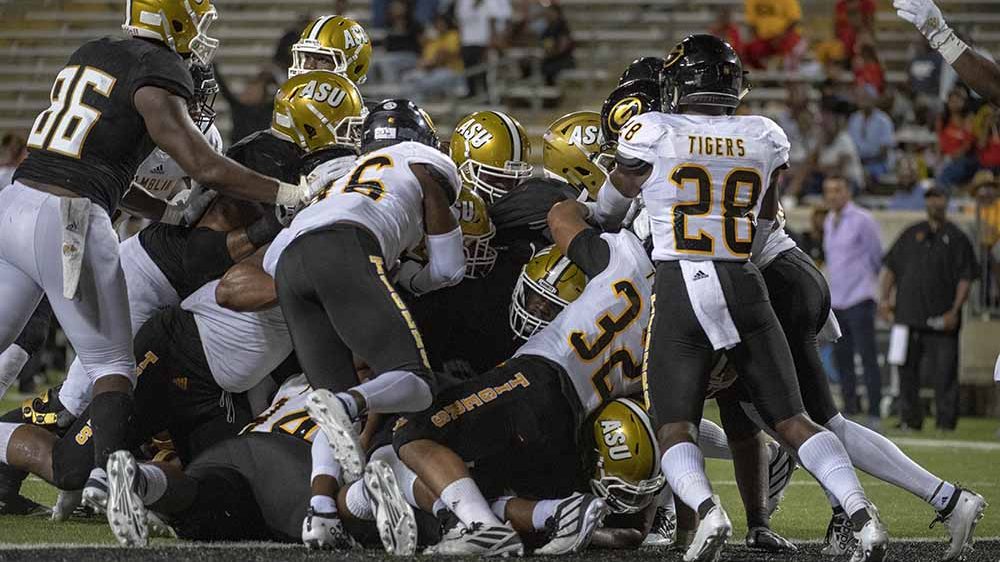 The fourth quarter proved to be the different between Alabama State and Grambling State, with the Hornets holding the ball for 11-plus minutes in the final stanza and putting the only points on the board in the process.

Alabama State used a one yard run by KHA’Darris Davis to take the lead and then milked the final six minutes of the game off the back for a 23-20 victory Grambling State in the Southwestern Athletic Conference (SWAC) opener for both teams.

The Hornets took possession in the fourth quarter after a Grambling State score to end the third to give Grambling State (0-3, 0-1 SWAC) and used 12 plays to march 75 yards in 5:05 to take the lead on the Davis touchdown run. After a nearly four-minute drive by the Tigers that resulted in a missed field goal, Alabama State responded with a 6:07 drive that ended with three kneel downs to end the contest.

Although Alabama State held the ball for the majority of the fourth quarter, the two teams were nearly identical in time of possession with the Hornets holding for 31:27 and Grambling State had it for 28:33.

Davis led the Hornets by completing 19-of-31 passes for 224 yards and a touchdown, while Michael Jefferson finished with eight catches for 81 yards. Jeremiah Hixon finished with five catches for 52 yards, while six other receivers caught a pass in the win.

Devon Booker led Alabama State defensively with 10 tackles, including five solo. He added a sack and 1.5 tackles for loss and returned the opening kickoff into the red zone. Irshaad Davis and Darius King each ended the night with seven tackles each.

The Hornets opened the scoring on a Hunter Hanson 32-yard field goal with 7:22 to play in the opening quarter, before Keilon Elder scored on a six-yard run with 41 seconds remaining in the quarter. Alabama State answered with a four-yard run by Jacory Merritt, the first of his career, before the Tigers scored six unanswered to take a 13-10 lead.

Hixon put the Hornets on the board with 9:32 to play in the third on a 23-yard pass from Davis to take the lead 17-13, before the final two scores of the night by each team.

Alabama State is off next week and returns to action at home against SWAC East Division foe Alcorn State October 5 with kick scheduled at 2 pm. Tickets are still available for the contest, and the game will be carried by the Hornet Sports Network with pregame beginning at 1:30 pm.