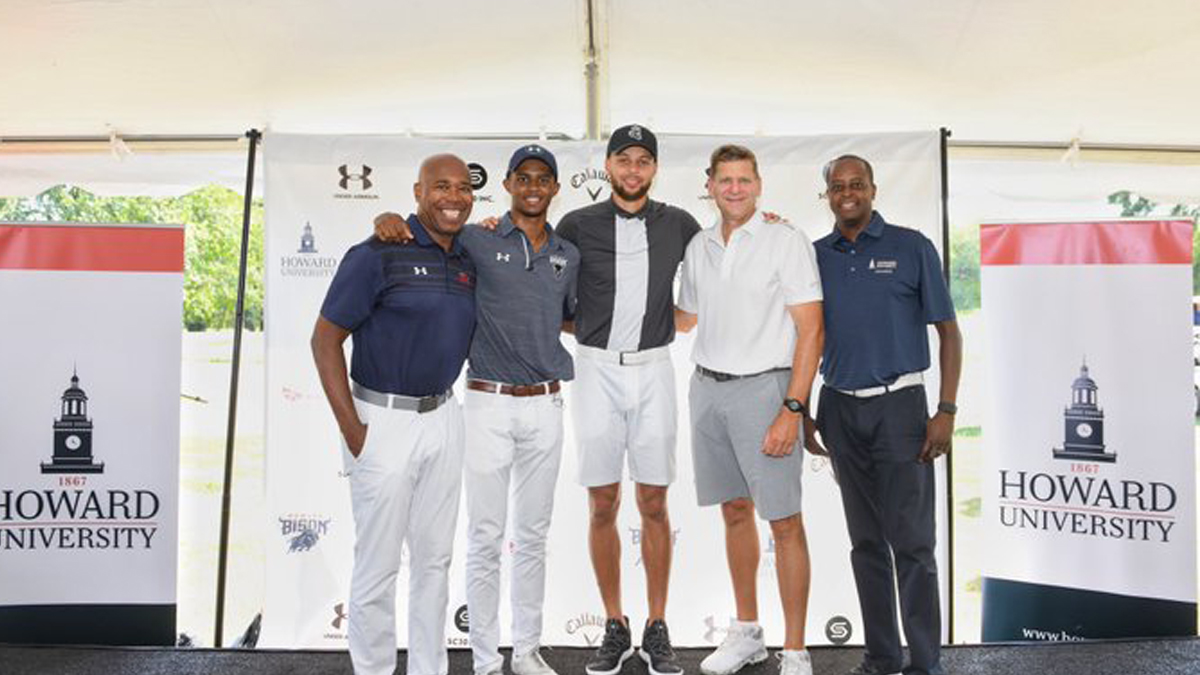 Stephen Curry’s involvement in Howard golf’s relaunch would not have happened if not for one HU student.

WASHINGTON, D.C. (August 19, 2019)— In a historic stride forward to grow the game of golf, six-time NBA All-Star and Eat. Learn. Play. Foundation co-founder, Stephen Curry, announced his commitment to Howard University today, with a pledge to support the establishment of the university’s first NCAA Division 1 golf program for the next six years.

Inspired by Howard senior and golfer, Otis Ferguson IV, whom Curry met during a campus visit earlier this year, Curry was compelled to act when Ferguson shared that his impassioned solo crusade to get a golf team at Howard proved unsuccessful.

An avid golfer himself, Curry tapped into what is increasingly becoming his defining trait— the distinctive ability to connect and empathize with anyone, anywhere, and made the unprecedented decision to help bridge the gap between talent and opportunity. Utilizing his unique position, Curry will introduce and increase access to elite golf at a historically black college, furthermore calling on sport and community giants like Under Armour, Callaway, Eat. Learn. Play., among others, for help with equipment, uniforms, and more.

“Golf is a sport that has changed my life in ways that are less tangible, but just as impactful,” Curry said. “It’s a discipline that challenges your mental wherewithal from patience to focus, and is impossible to truly master, so when you hear about these passionate student athletes who have the talent but don’t have a fair shot at the game, it’s tough. I feel really honored to play a small role in the rich history of Howard University, and look forward to building their first men’s and women’s golf teams with them.”

Howard University aims to debut the first men’s and women’s golf teams in the 2020/2021 academic year, with resources strategically allocated for talent scouting and training to have a competitive Division 1 team in place for its inaugural season, joining Howard’s other 19 Division 1 teams. The university previously had a Division II golf team and various intercollegiate and intramural club teams.

“Howard University is honored to partner with NBA Champion Stephen Curry to launch what is sure to become one of the best golf programs in the country,” said President Wayne A. I. Frederick, M.D., MBA.

“This program will expose the campus to a game with numerous benefits. Golf is unique because it can be played through various ages of life. Grandfathers can play with granddaughters. Expanding the competitive opportunities for student athletes, especially in arenas where they are underrepresented, is consistent with the university’s strategic plan.”