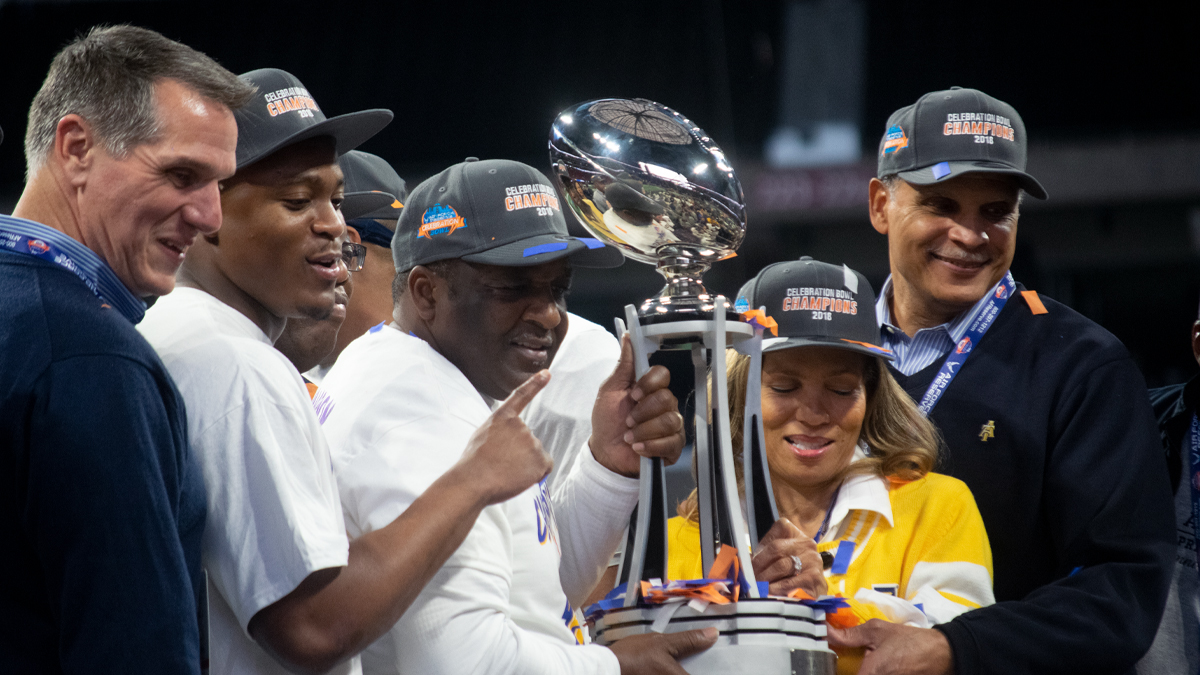 What would an NCAT move to the FBS mean for the school, HBCU athletics?

None of the 130 program’s in college football’s big-boy division is an HBCU. North Carolina A&T just might break into the club one day.

North Carolina A&T’s football program has made beating FBS opponents a habit in the past few football seasons. Is it ready to make the historic jump itself?

Sources told HBCU Gameday on Friday that Dr. Harold L. Martin, North Carolina A&T’s Chancellor, told faculty members he wants the school to make a run at becoming a member of the NCAA Division I Football Bowl Subdivision in the future.

A&T Director of Athletics Earl Hilton told Greensboro.com on Monday that Martin’s mention of making a move to the FBS isn’t in the works: for now.

“I’m not going to say it won’t happen someday,” Hilton said. “There’s nothing formally in place to discuss it right now. There’s no timeline. But it’s an exercise to talk about what transformative would look like in A&T athletics.”

Still, even talk of such a leap is major for an HBCU as there are currently none among the 130-program membership of college football’s elite.

There has been one HBCU to compete in the FBS since the Division I-A/I-AA distinction was created in the late 1970s. Tennessee State competed as a Division I-A independent from 1977 to 1979 before ultimately joining I-AA along with the SWAC and eventually the MEAC.

A&T was one of several schools to have conversations about moving up to Division I-A (FBS) in 1993, as HBCU football was filling crowds at home and putting solid numbers in NFL stadiums. Tennessee State, Grambling State, Jackson State, FAMU and Howard were said to be discussing the option along with A&T.

“It is strictly an exploratory conversation so we can get a feel for where different schools stand,” TSU AD Bill Thomas said at the time. “On the surface, I think a football league like that would do very well in attendance and fan interest.”

Ultimately, of course, that never happened. But the dream of a single HBCU making the jump lingered around for the next decade.

First there was Alabama State, who made a push to make the leap early in the next decade. The school never made the jump, but four years later, Florida A&M did. FAMU left the MEAC and played one season as a FBS independent in 2004.

“African-American players are dominating the sport and we need to move now,” then-FAMU coach Billy Joe said in 2003. “There’s a cadre of black high school kids who would love to go to a black (1-A/FBS) school.”

The move barely lasted until the end of the season.

FAMU never had the millions required to fund 22 more football scholarships, four more varsity sports and upgrades in facilities and staffing. All of those were required to make the move. More than 20 players were declared academically ineligible prior to the season and 196 NCAA rules were violated over the course of several years. The hastily made move was a failure and 15 years later the effects are still being felt according to many who have been around the program.

An A&T move up under Dr. Martin would be something not unfamiliar from his playbook. Fifteen years ago he spearheaded Winston-Salem State’s attempt to move up from Division II to Division I as chancellor. He left the school two years later and WSSU ultimately was unable to pull off the move.

A&T has made tremendous strides under Martin in the decade since he was hired at his alma mater, both on the field and as an institution overall. Perhaps the most public example of that is the football program. The program went winless in back-to-back seasons in 2006 and 2007, and was saddled with NCAA restrictions. Martin eventually tapped Earl Hilton as the program’s athletic director, and Hilton hired Rod Broadway to resurrect the program in 2011.

Four years later the team won the inaugural Celebration Bowl in 2015 with future NFL All-Pro Tarik Cohen leading the way on the field. Since then A&T has continued to gain notoriety not only in the HBCU world but around the FCS and college athletics as a whole. A&T has beaten an FBS team in each of the last three seasons (Kent State, UNC-Charlotte and East Carolina) as well as had players drafted in each of the past three seasons, something no other FCS program can claim.

Who will bring A&T its money?

Despite that success, though, A&T’s path to the FBS has some obstacles to overcome. Moving up to the FBS is something no other HBCU has done because it’s expensive. The scholarship maximum in FBS football is 85, 22 more than the maximum in the FCS. Many HBCUs are below the maximum scholarship number at their current level, so moving up isn’t ideal.

The mighty Atlantic Coast Conference is headquartered right in A&T’s backyard, but that would be the longest of possibilities. Conference USA and the Sunbelt, both of which stretch to Texas, would be more likely homes for an FBS A&T. Both conferences currently have schools in North Carolina, paving the way for A&T to play either Appalachian State (Sunbelt) or UNC-Charlotte (Conference USA) as well as school’s in neighboring states like Old Dominion (Conference USA) or Coastal Carolina (Sunbelt). The Sunbelt currently has 10 teams, and Eastern Kentucky is rumored to badly want in. Add in A&T and you’ve got a 12-team Sunbelt with relative balance east-to-west.

A move to the FBS would require substantially increased fundraising for A&T. But if any HBCU can make the move, it may be A&T right now. Just last summer, A&T came up with a naming rights deal, something that is rare among HBCUs and FCS programs overall.

Hilton downplayed Martin’s words as a grand idea of a futuristic A&T instead of a planned march to college football’s highest level.

“I don’t want to put words in the chancellor’s mouth,” Hilton said. “These are my thoughts. What I heard is he was describing the idea that we want to be transformative at A&T. He got here 10 years ago, and the question he asked the faculty and staff at that time was, ‘Do you want to compete?’ And … the answer was, ‘Yes, we want to compete.’

“So the question he posed on Friday is, ‘Are we ready to be transformative? And what does transformative look like?’ What are the goals we want to set for ourselves? How do we want to think of ourselves going forward? And that covers the entire institution: in athletics, in academics, in research, in our impact on the Greensboro community. Where do we want to move next?”

As long as leadership remains steady from top to bottom, it could work. For years, people have asked the question, “what if the best African-American athletes went to HBCUs?” The issue in football has been that the best athletes want to compete on the highest level, and no HBCU is among the 130 FBS programs.

If A&T can make the jump, and that’s a big if, we may finally get the answer to that question.

What would an NCAT move to the FBS mean for the school, HBCU athletics?