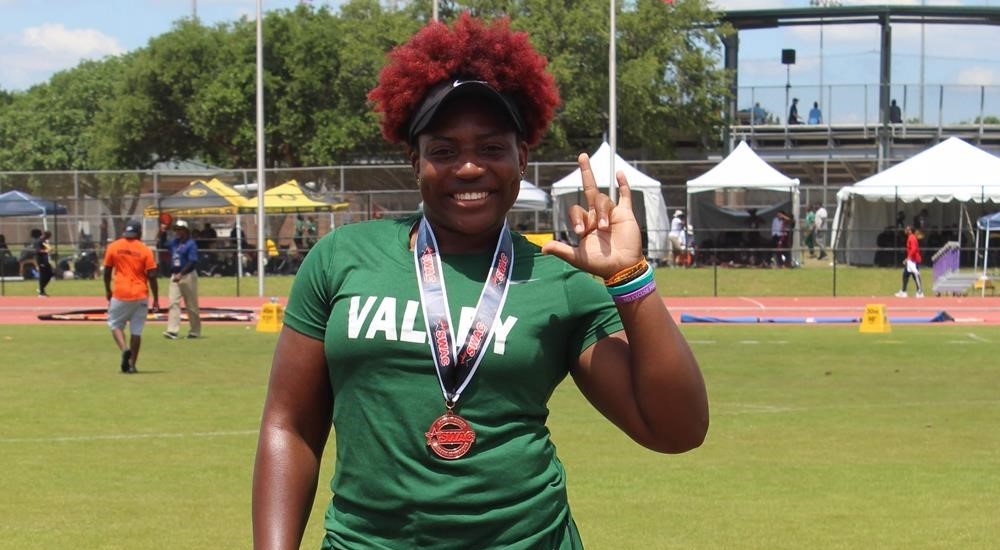 Tyefah Saunders started her career in the CIAA but has found a home in the SWAC.

ITTA BENA, Miss. – It’s May 2018 and Tyefah Saunders has just finished her freshman season at Shaw University in Raleigh, North Carolina. Back in her hometown of Kingston, Jamaica, she had just finished unpacking when her head coach Nadia Alexander-Pompey called her up.

“Okay – so where are we going?” Saunders replied.

That’s how Saunders made it to Mississippi Valley State. She knew nothing about Mississippi, the school or the Delta Devils. But she trusted in her coach to see her through.

“Everything here was a shock when I got here,” Saunders said. “But Coach [Alexander-Pompey] and I wanted the same things – to do good in school and on the track. I realized that if I wanted to do well, she was the only person that could get me there. So out of that grew this love and relationship we now have. So I immediately knew when she left, I had to go with her.”

The move up from Division II Shaw to Division I Valley was merited by her performance freshman year. Saunders shined at the 2018 CIAA Outdoor Track & Field Championships, winning the javelin with a personal record of 42.20 meters and finished runner-up in the shot put. Nevertheless, the transition hasn’t been easy.

“I didn’t know the food, the lingo or the music. But Coach sat me down and said that this wasn’t going to be another stop. We are going to make this our new home. So I had to adjust. After that talk I became friendlier with my team and outside of the team, integrating into the culture.”

One year later, Saunders has found many positive aspects of the Delta.

“When I’m here, I’m able to focus both on the track and in school. My old school was in the city so there were a lot of distractions. But this place keeps me grounded. And if I’m happy here, I can be happy anywhere.”

That focus has paid dividends in her sophomore season. Saunders earned eight wins in the shot put, including a personal record of 15.52 meters at the ASU Scarlett and Black Invitational during the indoor season and a 15.00 meter showing at the SWAC Outdoor Championships. The efforts earned her a trip to the NCAA East Preliminary Round.

That performance at regionals – she threw for 13.94 meters and finished 48th in the field – is giving her motivation going into her junior year.

“I want it all, plain and simple! I’ve never done as poorly [at regionals] in my life. I have so much more in me. My coach knows it and I know it. Getting to regionals or nationals is not enough – it’s about winning the indoor and outdoor titles.”

All also includes her degree in business administration with a minor in accounting. Saunders plans to go for her masters and practice corporate law after graduation.

A year into her new venture at a school she never heard of, Saunders is determined more than ever to go far. And any potential shortcomings about Valley don’t seem to phase her.

“In track and field, we all compete in the same meets. Anyone can go to regionals or nationals. Just because you’re from LSU or Mississippi State doesn’t mean you’ll beat me. At the end of the day, it’s not where you’re from – it’s what you got. And if I stay here and work, I can make my school look good. Put my school on the map.”