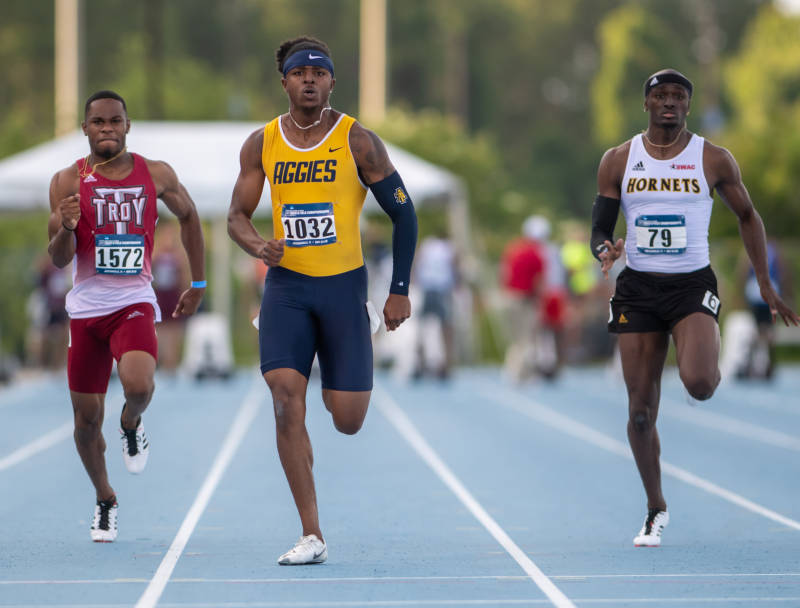 JACKSONVILLE, Fla. –Junior Trevor Stewart is headed to Texas with a legitimate chance to win a national championship.

Stewart qualified for the NCAA Outdoor Track and Field Championships with a sterling performance on Friday at the NCAA Division I East Preliminary Round at the University of North Florida’s Hodges Stadium.

Stewart’s effort has earned him a trip to the NCAA nationals hosted by the University of Texas in Austin, Texas, June 5-8. Four other Aggies will join him in Texas thus far with one day of competition remaining at the NCAA East preliminaries (regionals).

The qualifiers for the nationals will consist of the top-12 from each quarterfinal event which includes the top-3 from each heat and the next three best times.

There were also first-round events on Friday where the top-24 qualify from each event qualify for the quarterfinals which include the top-3 from each heat and the next six best times. Seven Aggies qualified for Saturday’s quarterfinals.

Junior Akeem Sirleaf will join Stewart at the NCAA nationals in the 400. Sirleaf ran the sixth-fastest time on Friday to finish his race in 45.80. Stewart and Sirleaf will be joined in the Lone Star State by senior Kayla White.

White, the 200m NCAA indoor national champion, qualified for the women’s 100m at the NCAA nationals by finishing with the second-fastest qualifying time on Friday, an 11.11. She finished behind LSU’s Sha’ Carri Richardson who ran a 10.99. Freshman Cambrea Sturgis also qualified for nationals in the 100 by finishing fifth in 11.17.

White and Sturgis also had a first-round race on Friday, the women’s 200. Sturgis had the second-fastest time of the day while White had to the third fastest. Sturgis finished ahead of White with a time of 22.70. White finished in 22.90 while freshman Kamaya Debose-Epps also qualified to finish 11thin 23.18.

Another Aggie who is now guaranteed a spot in the nationals is senior Rodney Rowe. Rowe, who earned first-team All-American honors last season in the 200, is headed back to nationals thanks to a qualifying time of 10.16 in the men’s 100m. Rowe also qualified for the quarterfinals of the 200 on Friday by running a 20.39 for the third-fastest time of the day. Sirleaf also qualified for the 200 quarterfinals with the 10th-best time at 20.63.

Freshman Akeem Lindo will get his first trip to a national championship meet. He finished ninth in the quarterfinals of 400-meter hurdles with a time of 50.42. Junior Chase Bonham came up short by finishing withtime of 51.55.

In the women’s 400, Tori Ray qualified for Texas by running a 52.35 for the seventh-fastest time.

Other quarterfinal qualifiers who will run on Saturday include senior Michael Dickson in the 110mh and junior Madeleine Akobundu in the women’s 100mh.