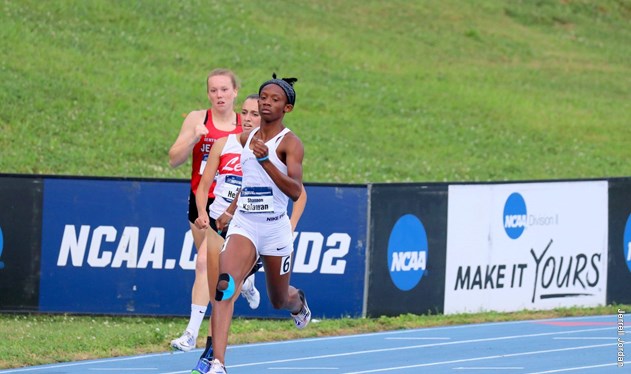 The time vaulted her to No. 1 in the nation in the Division II 400 meter women’s rankings

RALEIGH, N.C. (May 13) – Shannon Kalawan (Jr./Westmoreland, Jamaica) of Saint Augustine’s University posted the fastest Division II time in the women’s 400 meters this season at the Mount Olive Final Qualifier track and field meet on Sunday, May 12.

Kalawan blazed to victory in an NCAA automatic qualifying time of 52.97 seconds at the meet, held at the McDonald Sr. Sports Complex in Mount Olive, N.C. The time vaulted her to No. 1 in the nation in the Division II 400 meter women’s rankings.

The SAU standout ranks first in three events heading into the NCAA DII Outdoor Championships in Kingsville, Texas, next weekend. Kalawan is also the nation’s leader in the 400 hurdles and anchors the top-ranked 4×400 relay squad. She is the defending national champion in the 400 dash and 400 hurdles, and is part of a Lady Falcons unit that is the defending national champion in the 4×400 relay. Last season, Kalawan was named NCAA Division II Women’s Track Athlete of the Year for her accomplishments in the championship meet.

On Sunday, Kalawan was among several SAU sprinters who fared well at the Mount Olive meet. Among the women, the unit of Kalawan, Danielle Scantlebury (Fr./St. George, Barbados), Tashoy Blake (Jr./Clarendon, Jamaica) and Amanda Crawford (Jr./Brooklyn, NY) won the women’s 4×100 relay in a provisional time of 45.61 to move into a sixth-place tie in the 4×100 national rankings.

After Sunday’s meet, the Falcons and Lady Falcons will now prepare for the NCAA DII Outdoor Championships, hosted by Texas A&M University-Kingsville. The championship meet is scheduled for May 23-25.

Below is a list of Falcons and Lady Falcons who placed in the top 10 of their respective events at the Mount Olive Final Qualifier. A plus represents an automatic time and an asterisk represents a provisional time.