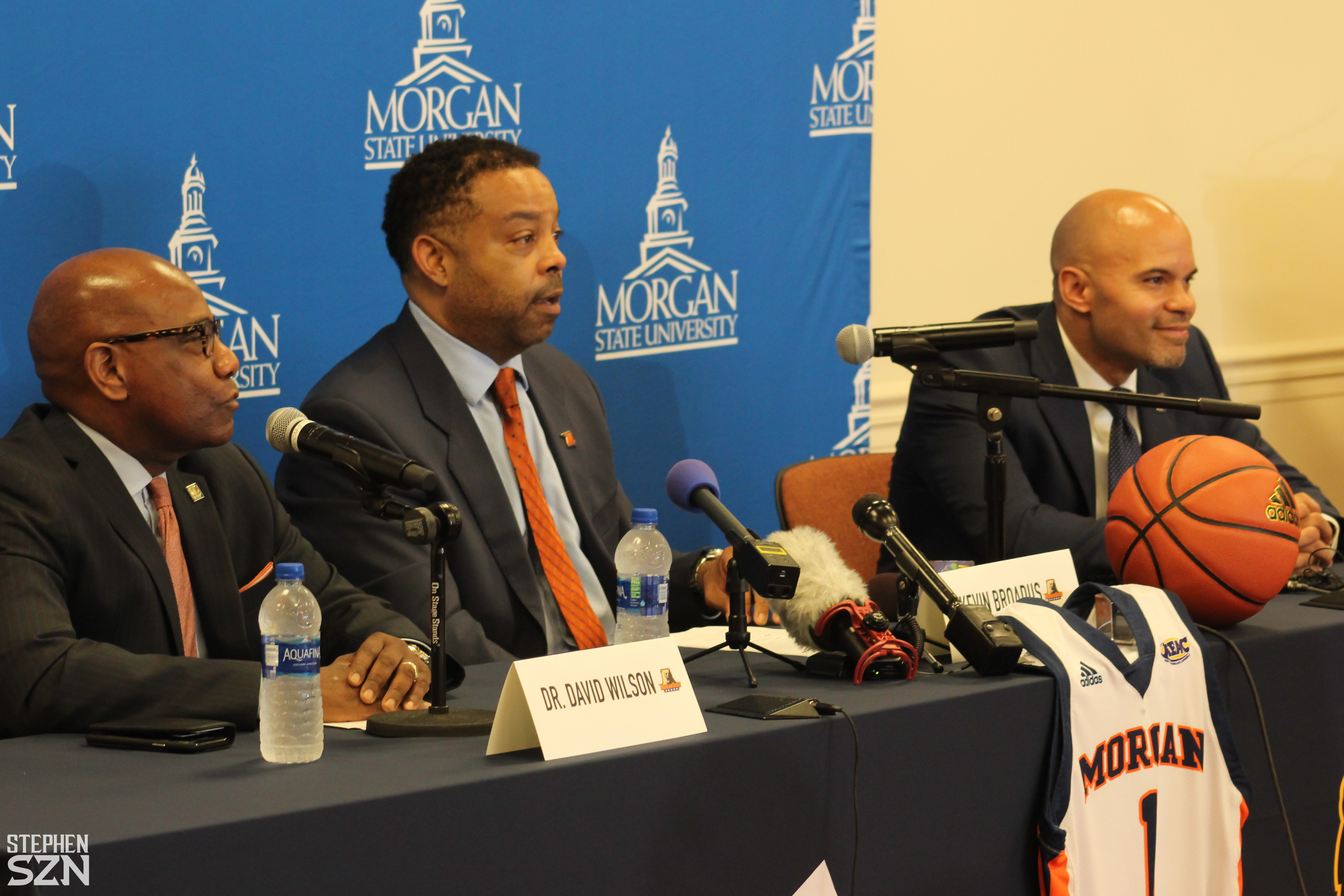 Kevin Broadus’ relationship with the Morgan State AD and his ability to recruit the DC and Baltimore areas have fans excited.

BALTIMORE– The first time Kevin Broadus made his way to Morgan State, he was the enemy.

“We had the fortunate chance to scrimmage against Morgan State when I was at Bowie State,” Broadus said. “I enjoyed that I had to keep it to myself because I didn’t want to make my alma mater upset.”

It was a different story when Broadus was introduced as MSU’s head coach on Monday.

His resume has strong ties to the DMV area as well as HBCUs. He played one season at Grambling in 1982 and then transferred to Bowie State in 1983. He was a two-time team captain from 1985-88. He was a 1,000 point scorer over the course of his career and was a CIAA All-Rookie Team selection. He later went on to get a degree in Business Administration in 1990.

He coached at his alma mater for three years before moving to another HBCU, University of the District of Columbia. After his stint at UDC, he coached at American, George Washington, Georgetown (twice), Binghamton, and Maryland within the past 20 years. Most notably taking Binghamton to the NCAA Tournament in 2009 as head coach.

After getting a second chance at head coaching, Broadus described this moment as “God’s Plan”.

“This moment I woke up I said it’s God’s plan, and I told the devil to get out of the way.”

Broadus’ time at Binghamton coincided with Morgan State AD Ed Scott’s time as an associate AD there. Scott said his wife was the one who initally mentioned Broadus as a potential candidate.

“I’ve known coach Broadus for about 10 years myself,” Scott said. She said ‘I think you guys will work well together.”

Scott mentioned Broadus’ strength as a recruiter as one of the qualities he thinks will make him successful in East Baltimore.

“He understands Baltimore very well,” he said. “He understands the DMV region very well. We don’t think that recruiting will be an issue for Kevin. And frankly, we think he will be able to out-recruit a lot of folks.”

Broadus thanked many people in attendance towards the end of the press conference, including a familiar, towering figure. Legendary coach John Thompson Jr and his son John Thompson III was a few of the people he thanked. Broadus spent a lot of time with the Thompsons during his tenure at Georgetown.

“Coach Thompson is a very special man to me,” Broadus said. “He took an inner city kid who was green in this game, taught me everything I knew. He’s one that pushed me over and over. “And sometimes painfully so that I still feel the bruises.”

“I mean that literally, not figuratively.”

Broadus has his work cut out for him as he takes over a Morgan State squad that went 9-21 last season under Todd Bozeman.