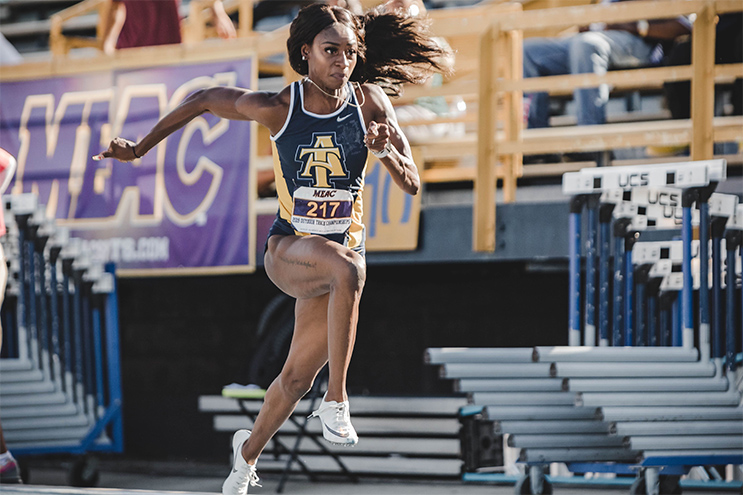 The NCAT track teams are above vaunted D1 track powers like LSU, Texas and others.

EAST GREENSBORO – On the United States Track and Field and Cross Country Coaches Association (USTFCCCA) website each week, they list the top-5 women’s and men’s outdoor track and field teams by listing the school, their placement and they place a graphic of their logo on top of the school name.

The North Carolina A&T interlocking logo is one step away from being seen on the website.

Each team has the highest ranking of any Division I historically black college or university in the history of the USTFCCCA poll. Both teams are there because individuals from those teams posted some remarkable and historic times over the weekend.

“I’m excited for our kids,” said Duane Ross, N.C. A&T’s director of track and field programs. “They have worked hard this season. They understand that high rankings are a projection and the goal is to be NCAA champions.”

On the women’s side, the top-5 teams are Arkansas (SEC), Texas A&M (SEC), Southern Cal (Pac 12), Kentucky (SEC) and Oregon (Pac 12). The rankings are based on the number of individuals on a particular team who are highly ranked nationally in various events.

The Aggie women are No. 6 thanks in part to the fifth-fastest time ever ran in 100-meter collegiate history, a 10.96 by senior Kayla White. White has the No. 1 time in the nation in the 100 and 200m (22.52) and the foursome of White, freshmen Cambrea Sturgis and Kamaya Debose-Epps and junior Taliyah Townsend, have the second fastest 4×100-meter relay time in the nation (43.45).

The Aggie men moved up 13 spots from their No. 19 ranking from a week ago. Only Texas Tech (Big 12), LSU (SEC), BYU(WCC), Florida (SEC) and Texas A&M (SEC) are ranked higher. Junior Trevor Stewart is the focal point of history on the men’s side. Stewart ran an incredible 44.38 to win the men’s 400 meters at the MEAC outdoor championships. It was the 14th-fastest time in world history. Stewart is also seventh in the country in the 200 with a time of 20.27.

Senior Rodney Rowe is the Aggies top man in the 200. He ran a personal-best 20.12 to win the MEAC outdoor 200 last Saturday, ranking him second in the nation. Rowe is fourth in the nation in the 100 after a come-from-behind win in the MEAC 100 final that saw him post a 10.05. Another Aggie, junior Akeem Sirleaf, also finds himself ranked in the top-10 nationally of the 200 at No. 9.

Sirleaf’s best time is 20.37, also recorded at the MEAC outdoor championships. Sirleaf also makes a top-10 performance in the 400 at No. 6 with a time of 45.42. There are two other top-10 times for the Aggies. Senior Michael Dickson is 10th nationally in the 110mh at 13.65. Even though he did win the 110mh MEAC outdoor championship last weekend, his 13.65 was recorded at the Aggie Invitational on April 12 at Irwin Belk Track.

The 4×100 team of Sirleaf, Stewart, Dickson and Rowe are ranked seventh nationally at 39.14, a time they recorded at LSU.

The NCAA Division I East Preliminary Round (regionals) is the next step for both teams, May 23-25, at the University of North Florida. From there the Aggies will move on to the NCAA Division I Outdoor Track and Field Championships, June 5-8, where they have legitimate chances to win individual and team national titles.