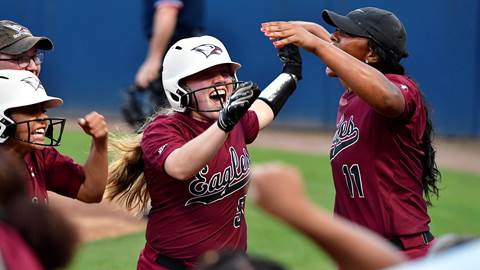 North Carolina Central completes its best Division I softball season with a win over nationally-ranked UNC.

The Lady Eagles broke through with three runs in the fourth on a go-ahead single by freshman Madison Mifsud and a two-run single by sophomore Jessica Powell.

It was all the run support Hurley needed as she kept the Tar Heels off the board until the final inning. UNC did attempt a late rally scoring one run in the bottom of the seventh. The hosts had the potential game-tying runners on second and third when Hurley induced a game-ending groundout to first before the Lady Eagles dugout erupted in celebration.

NCCU finishes its regular season with four consecutive wins and a 21-24 record. The 21 wins are the most by the Eagles in the programs’ NCAA Division I era.

North Carolina concluded its regular season at 33-17. The Tar Heels are ranked No. 24 in the current Softball America Top-25 Poll and they are sitting just outside the top-25 poll receiving votes in the other rankings conducted by USA Today/NFCA Coaches and ESPN.com/USA Softball.

After three scoreless innings, NCCU scratched out three runs off the ace of the Tar Heels pitching staff in left-handed junior Brittany Pickett. Junior Dalika Wallace was plunked by Pickett to start the one-out rally. Sophomore Olivia Daniel then had an infield single before Misfud drove in Wallace for the first run with a seeing-eyed single up the middle. Another infield single by senior Aleyah Evans set-up a two-run single to left by Powell that plated pinch runner Tehillah Duffy and Mifsud.

Hurley allowed a two-out single in the bottom of the first, but then held North Carolina without another hit until the seventh inning. Hurley, who retired nine batters in a row at one time, improved to 16-13 on the season and fanned three Tar Heels.

NC Central will await the Mid-Eastern Athletic Conference to announce the 2019 MEAC Softball Championship brackets next week. The league tournament will return to Ormond Beach, Florida, and will start on Wednesday, May 8.