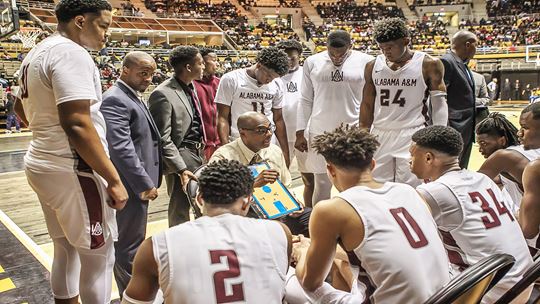 Alabama A&M rewards Dylan Howard with the permanent head coaching job after operating as interim for 2018-19.

Even though Howard has a new title, he is not new to the Alabama A&M program.

We are extremely excited to have Dylan Howard as our men’s basketball coach,” Hicks said. “During his tenure as interim coach, I was extremely pleased with the progress that was made by our team, both on and off the court.

“Coach Howard is a high-character individual who brings the basketball expertise to the position that we are looking for in our coach. He has assembled a high-quality staff who have done a great job in developing our student-athletes and recruiting the type of prospects who will help return our program to a high level.”

During his interim season at Alabama A&M, the program showed significant progress throughout the season. The Bulldogs finished with a 5-27 record, improving on the previous two seasons while being extremely competitive in SWAC play, in spite of having a roster that was significantly hampered with injuries.

“I would like to thank Dr. Andrew Hugine and Mr. Bryan Hicks for naming me the next head coach at Alabama A&M,” Howard said. “This truly is a blessing and a great honor to build this program into a championship contender.

“This past season we were able to lay a strong foundation by improving our record over the previous two seasons. We graduate three seniors, and each of them will be missed. The future is bright as we continue to recruit high-character individuals. We were able to sign two local players in the early signing period, and both were ranked in the top 25 in the state of Alabama.”

Howard also was active in the community during his tenure as interim coach, frequently having student-athletes visit local schools and participate in charity events.

Community service is something Howard plans to continue.

Howard came to Alabama A&M before the 2017-18 season, serving as the program’s associate head coach.

Prior to Alabama A&M, Howard spent five seasons at Morehead State as the program’s associate head coach. During that tenure, he helped the Eagles win 89 games and finish second in the 2016 College Basketball Invitational.

Howard has seven seasons of head coaching experience. From 2001-08, he was the head coach at Division-III Hardin-Simmons in Abilene, Texas, where he was named the 2005 American Southwest Conference coach of the year in 2005 and led the programs to its first ASC championship game appearance in 2007.

Howard started his coaching career in 1996 at NAIA Saint Francis, which is located in his hometown, Fort Wayne, Ind.

As a player, Howard played for Gene Bartow at UAB, where he was part of the Blazers’ teams that made NCAA tournament appearances in 1986 and 1987, then reached the NIT semifinals in 1989.

390
The Latest in HBCU Sports and Culture