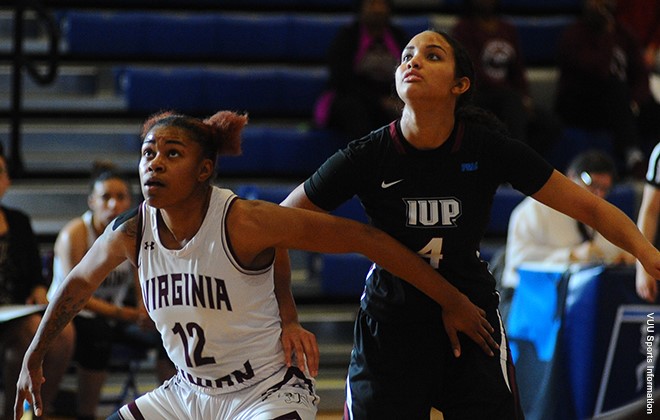 The Lady Panthers’ remarkable season comes to end in the second round of the D2 Atlantic Regional on Saturday.

Virginia Union University’s Jasmine Carter had a double-double while teammate Rejoice Spivey scored 20 points, but Indiana University of Pennsylvania defeated the Lady Panthers 66-58 in the second round of the 2019 NCAA Tournament on Saturday, March 16, in Glenville, W.V.

Carter scored 11 points and grabbed 12 rebounds in the game.  It was the 10th double-double of the season for Carter.

“I was really excited about playing IUP, which is a really good team,” said VUU Head Coach AnnMarie Gilbert.  “They execute well and have some good pieces, but I thought we were up to the challenge.”

“I liked the way we played for three quarters,” said Gilbert.  “We faced some adversity by not knowing what we would get out of Nicole Floyd.  “But I was just so impressed with the way she was able to bounce back and be a steady inside force for the team today, especially on the glass.”