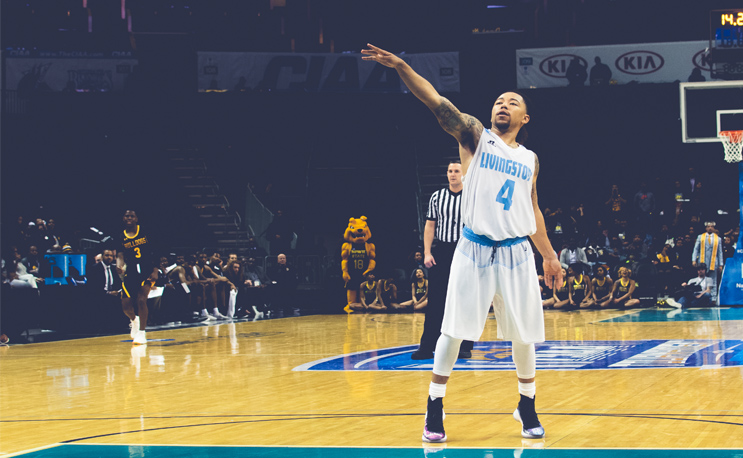 Livingstone took down Bowie State on Thursday night in the men’s quarterfinals.

For the third time in three years, Livingstone and Bowie State faced off in the Spectrum Arena with their seasons on the line. This year’s version resulted in Livingstone winning over Bowie State, 79-74.

The first half was a defensive battle. Scoreless for the first two minutes, BSU and LC tied at nine points with 11:50 to go in the half. A slight run from LC put them up 17-13, but BSU evened it out at 18 with 6:20 to go before halftime. After four more lead changes and tied scores, LC went into the half trailing BSU 31-29.

After the half is when the game really kicked off. Livingstone continued to trail for the first ten but kept it close. BSU took its biggest lead of the night at 51-46 with just over 12 minutes left, but LC responded with 7-2 run to take the lead with 9:02 left in regulation. The lead switched four more times and the two tied at 61 with just under five minutes remaining.

The Blue Bears put up five unanswered, but a three-ball from the Bulldogs brought their trail back down to two points with 3:20 to go. A three-pointer from Roger Ray gave LC the lead back that they would not surrender for the rest of the game. BSU narrowly trailed 77-74 with 14 seconds left, but Ray went to and made both to give Livingstone the win. Ray led the Blue Bears in scoring with 19 points.

LC has lost the last three times these teams met, most recently falling 82-71 at home to VSU in January. It’s March now, though, and anything is possible in tournament basketball. The semifinal match-up will start at 7 PM on AspireTV and the CIAA Sports Network.