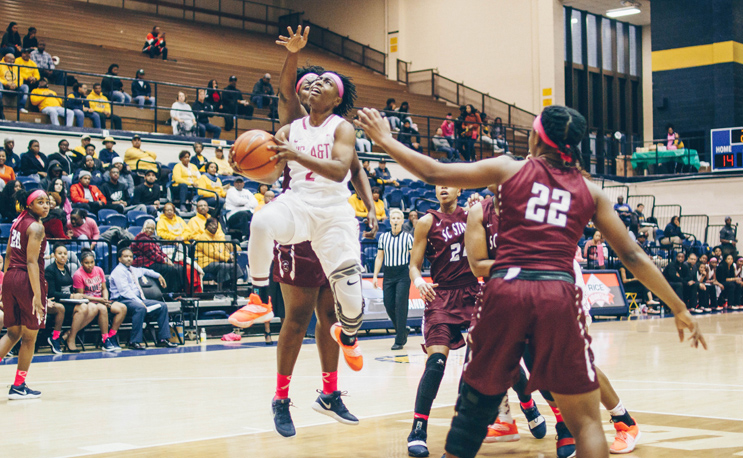 There will be no sharing in the MEAC this regular season as NC A&T brings home the crown.

EAST GREENSBORO (February 25, 2019) – There is no question this season that the No. 1 seed at the 2019 Mid-Eastern Athletic Conference Women’s Basketball Championship Tournament, March 11-16, is the MEAC regular-season championship.

The North Carolina A&T women’s basketball clinched their first outright MEAC regular-season title since the 2009-10 season with a 73-69 win over Savannah State Monday night at Corbett Sports Center. It is the Aggies third MEAC regular-season title in three years, but their previous two titles were shared with Bethune-Cookman with the Wildcats taking the No. 1 seed in 2016 and the Aggies earning the tiebreaker for the No. 1 seed in 2018.

“We will not have to wait to find out who the No. 1 seed is this time,” N.C. A&T coach Tarrell Robinson said. “To have it clinched this early feels good.”

“The biggest pressure right now is being undefeated in conference, having only two games left, and understanding that people want to give us our first loss before we reach the tournament,” said Robinson. “Teams that are not where they need to be, beating A&T is what coaches want going into the tournament, a statement game that says we can compete to win a championship.”

“I don’t want to be that example,” Robinson concluded.

Savannah State (6-17, 4-10 MEAC) did their best to make an example of the Aggies. A 3-pointer by Maxwell Azhana and a free throw by Moton Heniaya gave the Tigers a 61-59 lead with 5:11 remaining in the game. Junior Alexus Lessears then turned a tough night into a game where she played a key role.

Lessears started the game 0-for-8 from the floor before taking an entry pass from Foy and scoring inside to tie the game at 61 in the fourth quarter. Lessears then rebounded her own miss to help the Aggies regain the lead. Junior Mikaya Wilson then found Lessears in the post again for another score. Hill added to the Aggies 8-0 run with two free throws to give N.C. A&T a 67-61 lead with 2:48 to play in the game.

The Aggies maintained a six-point lead at the 1:24 mark when Foy, who Robinson calls the Aggies closer, dribbled into the paint and pulled up for a 13-footer that she netted for a 71-63 Aggies lead with less than a minute remaining in the game.

“I’m so proud of my ladies and the way they responded tonight,” said Robinson. “We didn’t play our best in front of our crowd and (Savannah State coach Cedric Baker) did a great job in preparing those young women to beat us, but we found a way to overcome it and get the victory.”

N.C. A&T led by as many as 11 in the first half before a run got the Tigers to within four, 32-28, with 36 seconds remaining in the second quarter. But freshman Jasmen Walton hit a 3-pointer as time expired in the first half to give the Aggies a 35-28 halftime lead.