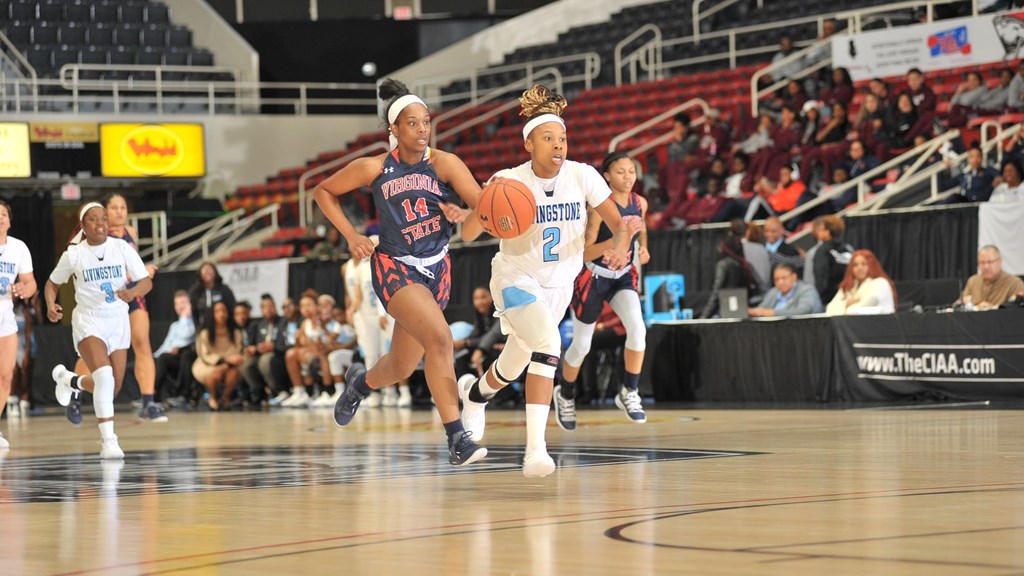 The 2019 CIAA Women’s Basketball Tournament opening rounds are in the books. Nine teams entered with the hopes to move on and only five got the chance.

Tuesday was the final day of the 2019 CIAA Tournament opening round and the entire day buzzed with around-the-clock competition. Eight women’s teams battled for spots to advance and face the awaiting top conference seeds in the quarterfinals.

New kids on the block

The day started with CIAA-newcomers Claflin winning 69-65 over soon-departing Chowan.

Chowan took a 7-2 lead early in the first quarter, but a 12-2 Claflin run helped them close in and end the quarter up 20-13. Claflin maintained the lead throughout the second quarter and went into halftime up 39-30. Chowan outscored Claflin 20-13 after the half and ended the third quarter down 52-50, cutting the trail to two points. The score tied at 52 with 9:16 remaining in regulation, but a 13-6 Claflin run paved the way to the 69-65 victory.

Claflin’s Dashia Jackson led in the win with 23 points. Claflin will advance in its first-ever CIAA tournament to face #1 south seed Fayetteville State on Wednesday, February 27. Tip-off is scheduled for 2:20 PM.

Lincoln and Saint Augustine’s match-up immediately followed and LUPA came out with the 63-52 win.

SAU opened the game with a 9-0 run, not allowing a LUPA basket for the first four minutes. LUPA then went on its own needed 9-0 run to close the gap and go into the second quarter trailing 13-10. The Lady Lions held SAU to eight points in the second quarter and went into halftime up 24-21. LUPA came out of the half still hot, orchestrating an 11-1 run to go up 35-22 with 6:30 remaining in the quarter. SAU responded with a 8-1 run, but still trailed LUPA 43-36 at the end of the third. The Lady Lions did not make any field goals in the final seven minutes but shot 13 times from the charity stripe and stayed on defense, both good enough for the 63-52 win.

Kwanzaa Murray led LU with 24 points and Kenzie Spencer followed with a 15-point, 10-rebound double-double. Lincoln will now face Johnson C. Smith, the second seed in the CIAA South, in the quarterfinals on Thursday, February 28. Tip-off is scheduled for 3 PM.

LC opened the game with a 9-1 run and outscored VSU 25-9 in the first quarter. The Lady Trojans woke up with just over five minutes remaining in the second quarter and activated a 14-1 run to go into the half trailing LC 40-26. LC got outscored 17-12 in the third cutting the deficit to single digits, up over VSU 52-43 going into the fourth. VSU outscored LC again by 20-15 in the final quarter, but Livingstone’s first quarter damage all but sealed the deal for the 67-63 victory.

Round One: Take two

Elizabeth City State opened up the tourney on Monday night with a 77-55 win over Shaw to earn the shot to compete for the quarterfinals. It then closed out the day for the women on Tuesday with a 65-49 victory over Winston-Salem State.

The first quarter started with a WSSU 10-0 run, but that soon got matched by ECSU. An 18-5 Lady Vikings run gave ECSU the 18-15 lead to end the quarter. ECSU stepped up the defense and held WSSU to six points in the second quarter to go into halftime with the 32-21 lead. WSSU only got outscored 33-28 in the second half of regulation but could not overcome the deficit from ECSU’s second quarter presence. After a slow start, ECSU took the 65-49 win.

Devona Stell of ECSU led in scoring with 19 points and brought down 21 rebounds. The Lady Vikings advance to face #2 north seed Bowie State on Thursday, February 28. Tip-off is scheduled for 1 PM.