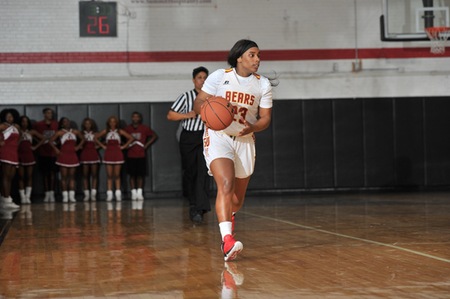 St. Aug had some fun on Twitter before hosting Shaw, but its Raleigh rival had the last laugh on Saturday.

The second round of Shaw and Saint Augustine’s crosstown rivalry unanimously went to Shaw on Saturday with a clean sweep.

Host SAU kick-started the heat of the rivalry with a video from its pep rally setting a Shaw-themed Teddy Bear ablaze, so this CIAA Southern Division doubleheader had no choice but to be a good one.

The women’s match-up started the action. Saint Aug’s opened the game going up 5-0 less than two minutes in, its largest lead of the night. Shaw rallied to tie the game at 12, then took control from there. The Lady Bears went on an 8-0 run in the last 3:58 of the quarter to close it out up 20-12. SAU trailed throughout the second quarter went into the half with the same point margin, SU up 30-22.

Theres not much to say about the final two quarters because after the half, the show belonged to the Lady Bears. The third quarter was slow-churning, but Shaw closed it out up 42-32. SU blew out SAU 25-8 in the fourth quarter to walk away with the 67-40 road win. Saint Augustine’s never regained a lead after the first quarter.

The Lady Bears are now 7-19 overall, 2-14 in the conference and 1-9 in division play. Macy Keen led Shaw with a 28-point, 11-rebound double-double. KlinTisha Martin followed with 15 points, and RaQuel Kellow finished out the double figures with 10 points.

No Hinton? No Problem

Next up, men’s action. Southern division leader Shaw entered the match-up with D2 top-scorer Amir Hinton inactive, but we would soon learn that would be no issue.

Shaw opened up the game with a three-pointer, but trailed throughout the first half after that. Saint Augustine’s got hot and went on a 11-2 run with just over three minutes remaining in the half with help from a three-pointer just before the buzzer. Shaw went into the half trailing 41-29.

The second half was an uphill, but rewarding, battle for the Bears. Led by Derrick Randolph, a 27-12 Shaw run was sealed by a Randolph layup and tied the game at 61 with 6:37 remaining. A three-pointer from Randolph less than a minute afterwards gave Shaw the 64-61 lead, its first lead of the second half. The Bears held onto their lead throughout the remainder of regulation with big help from a 10-0 run with 3:34 remaining. Shaw escaped with the comeback 76-68 road win. Shaw held SAU to seven points for the final 6:55 of the game.

The Bears have won two straight and are 13-12 overall, 8-8 in conference play and 7-3 in the division. Randolph led Shaw with 20 points and 8 rebounds. Geremy Taylor followed with 13 points, DaVaughn Kelsie and Davon Dillard both contributed 11 points.

Shaw will continue its road campaign and face Fayetteville State on Wednesday, February 20. The southern division doubleheader is slated to tip-off at 5:30 in FSU’s Capel Arena.

Considering how Saturday went, let’s hope FSU doesn’t decide to greet its guests with a video.