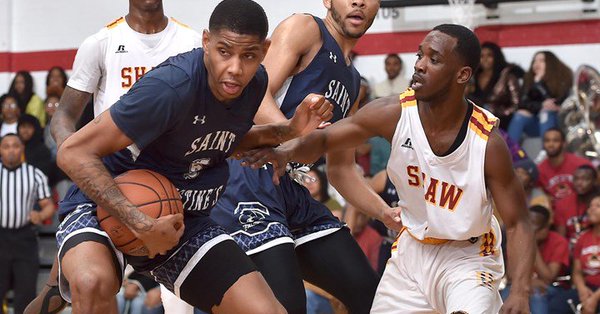 Saint Augustine’s started off sloppy, but regrouped and dominated from beyond the arc to defeat Shaw in CIAA South play.

Saint Augustine’s revived a slow-to-start first half performance and won 76-74 over Shaw in CIAA Southern Division action on Saturday.

In the second half, Shaw outscored Saint Aug’s 51-44. However, SAU still managed to escape with the road victory with help from excellent 3-point shooting. Shaw took a 61-55 lead with five minutes remaining, but a three from Tyree Gaithright cut the trail to 61-58. Mel’Quan Ames put up a three to cut the trail to 64-62, and a Rashad George 3-pointer took the 65-64 lead with just under three minutes remaining in regulation. SAU did not give up the lead for the remainder of the game. Saint Augustine’s finished 8-10 from three in the second half and 12-21, an impressive 57.1%, beyond the arc through regulation.

The victory ignited a much needed win-streak for Saint Augustine’s. SAU now has two consecutive division wins after a nine-game losing streak from mid-November throughout December. Shaw’s defeat ends its three-game win streak.