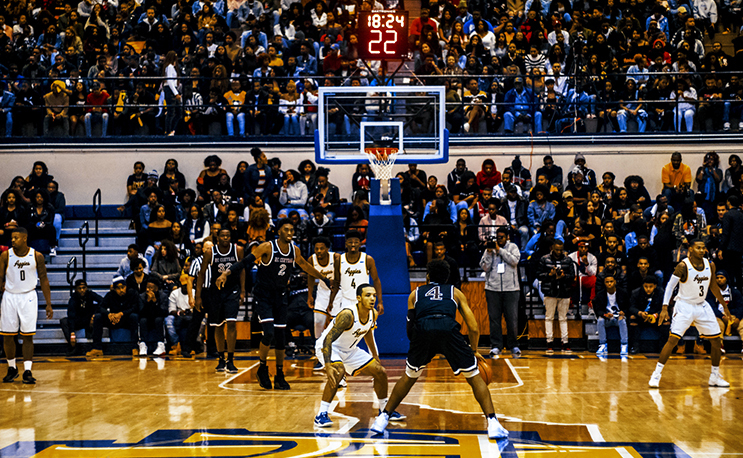 There are levels . There are teams that are in your conference, teams you have great battles with, and then there are teams that you simply have to beat. North Carolina Central and NC A&T will renew their rivalry on the hardwood on Saturday, one that goes all the way back to the CIAA days. The rivals have split the last four meetings against each other. The season is nowhere near done but this game always has high stakes and heavy trash talk.

NCCU is coming off domination of Morgan State after their loss to Coppin State last week. It started their season against Bethune-Cookman and since then, they have seen a fairly easy schedule. Despite the easiness, the Eagles slight fell off but after their last game; we know the Eagles are ready.

The Eagles are hot but the Aggies are too. Four out of their five wins have been decided by nine points or less. The Jay Joyner coached Aggies have been able to take some bump and finish their games off when it matters the most. Gameplans will truly determine this game. The Aggies ranks third in total offense within the conference while the Eagles rank first in total defense.

Raasean Davis will most definitely be a power player in this contest. The s is currently averaging 15.5 points per game and 9 rebounds per game. What’s dangerous about Davis is that he barely misses. He currently ranks within the top 20 in the country in field goal percentage.

The Aggies and Eagles will clash at 4pm in Durham.

There was a lot of talk about Bethune-Cookman coming into the season, as well as NCCU and even A&T after its comeback season in 2018.

Norfolk State didn’t get a lot of buzz outside of the Southside of Hampton Roads, but its time teams started paying attention to it. NSU’s 74-69 win over SC State was its sixth-straight, keeping it perfect in MEAC play, the best record in the MEAC.

NSU doesn’t do anything great outside of blocking shots (4.5, tops in the MEAC) but it does pretty much everything well. Nick Thomas leads the team in scoring at just under 14 ppg, but Jamerson and Steven Whitley can both step up for baskets. A Coppin State-over-NCCU-type victory withstanding, NSU should dispose of Maryland-Eastern Shore on Sat.

The Bear Cave is Shaking

Morgan State currently sits at 2-4 in MEAC play. Three of their four losses have been by five points or less. Savannah State came back and beat the Bears at home. So did SCSU. The win against Howard was a boost but losing to A&T this past weekend was a tough setback for MSU. And after NC Central released “we lost to Coppin State” anger on MSU, things have to get better quickly.

Here enters Bethune-Cookman. The projected MEAC champs are currently on a two-game winning streak. The Bears are able to match up but a win is needed. The students are back on East Cold Spring and Hill Field House will be rocking. The Bears will face their biggest home test so far this season at 4pm.

The MEAC is close this year and Coppin State and Florida A&M are playing well so far in conference play.

The Eagles went winless until conference play and the Rattlers have been on and off per se. They have lost their next conference game after winning one. The last result was a win, will the trend continue?

The last time we saw the Eagles, Coach Juan Dixon was ejected from the contest vs the Aggies. They are 1-2 in their last three MEAC games after starting 2-0. But their one win in that span will a major win over the Eagles from Durham.

Both teams are in the upper half of the standings right now, this game will be very important as teams go up and down the standings. The teams will face off at at Coppin State.