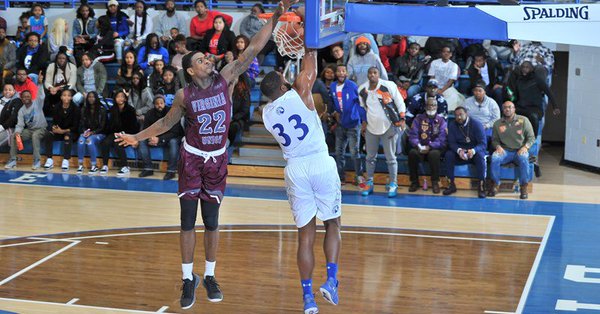 Virginia Union men and women stay hot in the 910 while Chowan and Lincoln lose to Southern Division rivals.

Double-header conference basketball games to take over Saturday? Don’t mind if I do. Six CIAA teams went head-to-head in men’s and women’s basketball on Saturday afternoon. It was an unpredictable afternoon to say the least, as four women’s and three men’s games were determined by a margin of ten points or less.

As far as “headscratchers” go there were a few, but I’ll keep it at two games and one location.

In women’s basketball, Virginia Union (12-1, 4-1) won 63-53 over Fayetteville State (8-5, 3-2), but it was a heart-breaker for FSU. Both teams came in with just one conference loss and respective win streaks to protect. FSU was neck-and-neck with VUU for a great deal of the game and only trailed by a point at the end of the third quarter. However, VUU rallied and scored twice as many points as FSU in the final quarter to pull off the 63-53 win. Fayetteville State’s win streak ends at five and Union has now won four straight.

Fayetteville State’s men (2-10, 1-4) took the floor in hopes of turning things around, and they almost did with a 14 point advantage over Virginia Union (7-5, 4-1) at halftime. FSU had its biggest lead of the night at 17 points with seven and a half remaining in regulation. VUU wasn’t ready to quit, though, and went on a 28-11 run to take the game to overtime. Union went on to win 80-73 in overtime. VUU has now won four in a row.