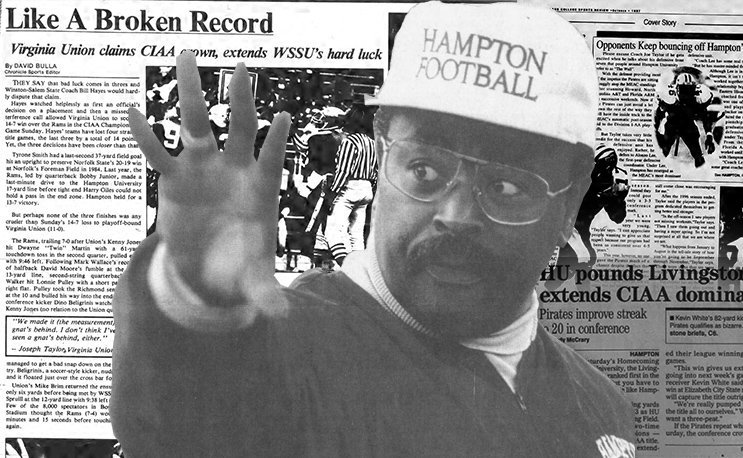 Winning championships at three different HBCUs in four decades at two levels has put Joe Taylor in the College Football Hall of Fame.

One of the greatest coaches in modern HBCU football history is set to join an elite group of coaches. Joe Taylor, who spent the bulk of his career at Hampton and Virginia Union, has been selected to the 2019 College Football Hall of Fame Class.

After one season as the head coach at Howard, Taylor came down Interstate 64 and took over the program at Virginia Union, where he won 60 games in eight seasons. His best season with the Panthers was in 1986 when he guided the team to the CIAA title, an 11-1 record and a trip to the NCAA Division II Playoffs. Taylor also guided Virginia Union to the playoffs during a 10-2 season in 1990 and an 8-3 season in 1991.

After moving to the FCS in 1995, his Hampton teams would win three more Black College National Championships and five MEAC titles while making five FCS Playoff appearances. The four-time MEAC Coach of the Year owns eight of the top 10 winningest seasons in Pirate history, including the top six. Taylor also guided Hampton to a win in the 1999 Heritage Bowl over Southern, and he coached three NFF National Scholar-Athletes during his time at the school: Timothy Benson (1993), Malcolm Benson (1995) and Michael Bland (2000).

Taylor concluded his stellar coaching career at Florida A&M from 2008-12, where he became the first coach in school history to win 25 games in his first three seasons. Arguably, his best season with the Rattlers came in 2010 when the team went 8-3 and claimed a share of the MEAC title.

At the time of his retirement, Taylor’s 233 career wins were tied for the third most among coaches at historically black colleges and universities. Over his entire 30-year career, he coached 68 First Team All-Americans, 142 first team all-conference players one First Team Academic All-American.

Taylor shined during his tenure as Hampton’s head coach from 1992-2007, posting a school record 136 wins while leading the Pirates to four SBN Black College National Championships. Hampton played at the NCAA Division II level his first three seasons, earning two Division II playoff appearances, including the school’s first-ever NCAA win. Taylor guided the Pirates to CIAA titles in all three of those seasons and the first of his four Black College National Championships in 1994.

A former president of the American Football Coaches Association (AFCA), Taylor also served on the FCS All-American Selection Committee and the advisory board of the Black Coaches Association. He has received lifetime achievement awards from the AFCA/FCA and the All-American Football Foundation, and he is enshrined in the Virginia Union Athletics, Western Illinois Athletics, CIAA and MEAC halls of fame.

A graduate of Western Illinois University, Taylor played offensive line for the Leathernecks under College Football Hall of Fame Coach Darrell Mudra. He began his coaching career as an assistant at Howard D. Woodson High School in his hometown of Washington, D.C., from 1972-77. Before his first head-coaching job, Taylor also served as an assistant coach at Eastern Illinois (where he helped earn the 1978 NCAA Division II national title), Virginia Union and Howard. Since December 2013, he has served as the athletics director at Virginia Union.