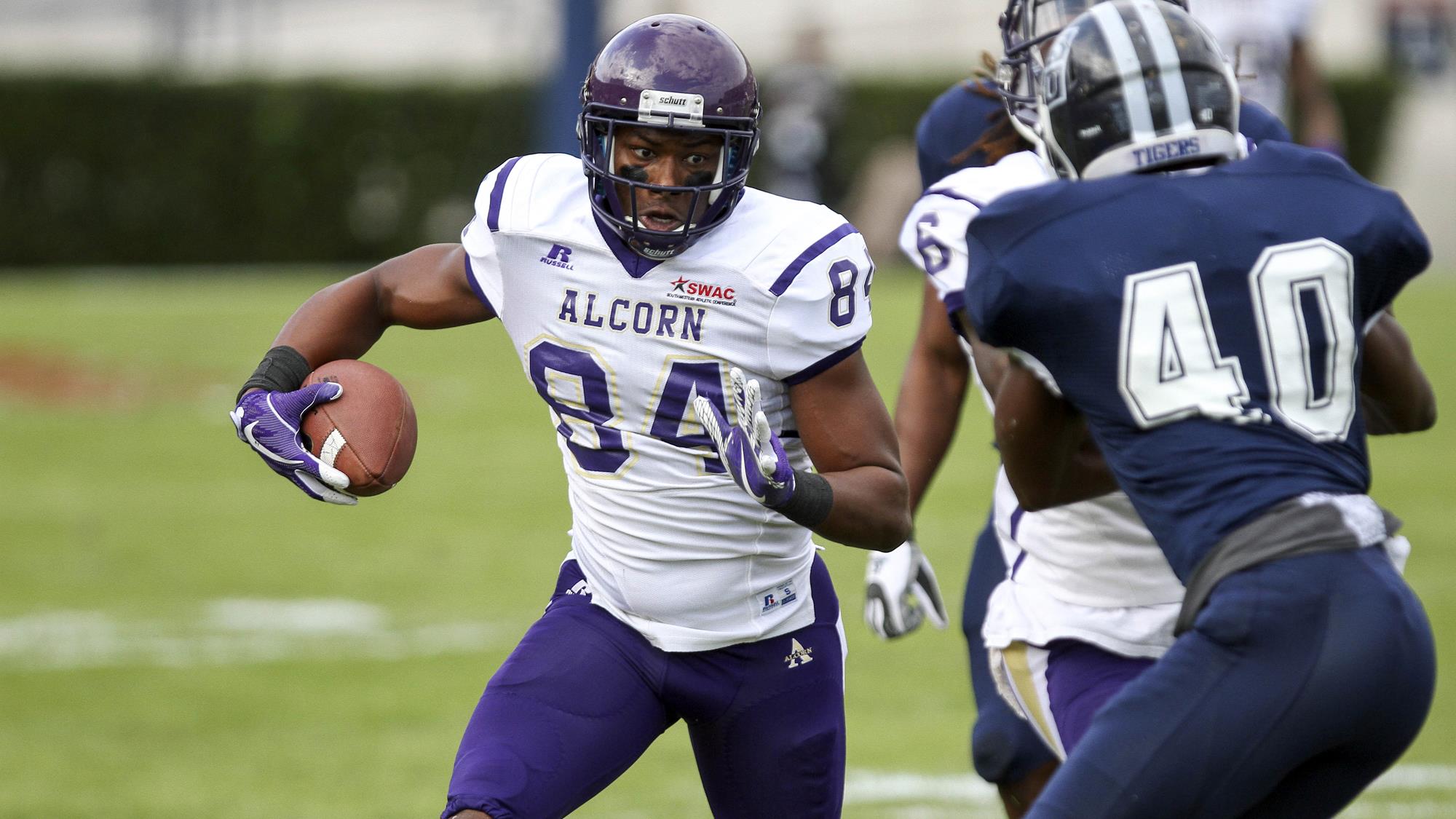 The battle for Mississippi raises the stakes.

Three weeks ago, Jackson State found itself searching for an identity after a demoralizing 41-7 road loss to Southern University, leading to the firing of then head coach Tony Hughes just 24 hours later. Eight weeks into the season with a change in both offensive and defensive coordinator and John Hendrick becoming the interim head coach; JSU’s football program – to the public’s eye – looked as if it was about to be washed away into the abyss of nowhere.

Despite the middle of the season changes and drama surrounding them, the players had another agenda, one that called for a strong case of resiliency. At 3-4 and 2-2 in conference play, the Tigers never lost sight of their goal to compete for a championship and remained in the hunt, knocking off Prairie View 34-28 at home and going on the road to pick up a critical division win against Alabama State 20-2.

While Hendrick is fired up about his team’s success, he did not expect to be in the head coach position at the beginning of the season.

“It has been unusual,” Hendrick said.

Jarrad Hayes, the Tigers starting senior quarterback, said the ultimate goal of competing for a chance at a championship never changed despite the coaching turnover, crediting the team’s confidence and togetherness.

“It was always our goal at the beginning of the season,” Hayes said during the Tigers weekly press conference on Monday.

Jackson State travels to that school in Lorman next Saturday for an opportunity to win the SWAC East Division and play in the 2018 SWAC Championship Game #BleedTheeBlue #WeBeatAlabamaState pic.twitter.com/sL39Oirjia

“We got the attitude that no matter what happens, we know at the end of the season where we want to be. Things have happened but we came together as a team: offense, defense, and special teams. We’re confident and we do not feel like we can be stopped.”

Everyone does their part

Instead of folding under pressure with piles of adversity in front of them, the Tigers came together as a “family” would over Thanksgiving Dinner, according to Hendrick.

“You know when you have a family dinner, everybody is responsible for something,” Hendrick said.

“Aunt Shirley might make the macaroni and cheese and Aunt Madelyn might be good at making the sweet potato pie. I think we’re doing exactly what we need to do to as a team to win football games and I really like where we are as a team right now.

For the first time this season Jackson State is ranked in the 2018 BOXTOROW FCS HBCU Football Coaches Poll.

The Tigers are No.8 #BleedTheeBlue

Jackson State (5-4, 4-2) now sits one win away from making its first SWAC Championship game appearance since 2013 when JSU lost to Southern 34-27. However, the one game sitting between JSU and a SWAC title appearance happens to be its bitter arch-rival Alcorn – a team that has made four-straight title appearances since 2014 that includes a 40-32 loss against Grambling in 2017.

And while Hayes knows it won’t be easy for him and his teammates, he said one could not ask for a better end to a season filled with resiliency.

“It’s going to be packed but it is nothing we have not seen before. At the end of the day, once we step between those lines, that’s all that matters. We’re ready.”

Since 2007 – the year JSU won its last conference championship – the Tigers have won seven of the last 11 meetings between the two teams. However, JSU is 2-3 in the last five matchups and 3-3 since the game officially became the “Soul Bowl” the summer before the 2012 football season.

The “Capital City Classic (CCC)” – the name that most fans know the rivalry game to be – was the modern day name for the game when the two schools played in Jackson from 1993 to 2011 before both schools began taking turns hosting the game each year as the Soul Bowl. Before the game was given the title of CCC, it was sometimes called the Turkey Bowl Classic as the game was once played on Thanksgiving Day.

Fans will pack the high-rise hills and the stands of Jack Spinks-Marino Casem Stadium Saturday afternoon to see which Mississippi school will represent the SWAC East in the conference title game on Dec. 1. This year’s Soul Bowl will mark the first time it will determine who will compete in the title game.

Hendrick said he expects the environment to be off the chain.

“I am expecting an unbelievable college football environment,” Hendrick said.

“When you coach and you play this game, you want to play in an environment that is loud and obnoxious. It can’t get any better than that.”

ASU (7-3, 5-1) is coming off a bye week after a 52-42 loss on the road to New Mexico State. The Braves, which lost to the Tigers 7-3 in last year’s Soul Bowl in Jackson, will not only be looking to seek revenge but also secure their fifth consecutive appearance in the SWAC title game.

“It’s a challenge for us and I look forward to it,” Hendrick said. “Alcorn is a really good football team and we need to be really solid obviously on defense.”

Johnson, a redshirt junior, has thrown for 1,767 yards, 14 touchdowns and eight interceptions (third best in the SWAC) while rushing for 802 yards and seven touchdowns (ranked fourth in the conference).  Against New Mexico State, the Tampa, Florida native threw for 316 yards and four touchdowns and rushed for 137 yards on 26 carries.

To go along with Johnson’s dual-threat ability at the quarterback position, the Braves feature a rushing attack that includes three running backs who can make big plays out of the backfield in their offense in De’Shawn Walker, P.J. Simmons, and Marquise Forman.

Walker, who ranks second in the SWAC in rushing yards, has run for 747 yards and nine touchdowns on the season, averaging 5.7 yards per carry. Behind him, Simmons has tallied 645 yards and three touchdowns while Forman has rushed for 264 yards and two touchdowns.

Look for Braves head coach Fred McNair to get the rushing attack established early in the game.

Hendrick, however, is confident that his defense will get the job done, highlighting that the Tigers main objective every week has been stopping the run.

“If you go back and go over the year and you watch us defensively, we really have not been hurt by a running back between the tackles,” Hendrick said.

“There have been some quarterbacks to run against us because we’ve gotten ourselves out of position trying to do too much at times. That’s going to be big this week that we make sure we don’t allow him (Johnson) to run against us.”

The Tigers run defense – which enters the game ranked second in the conference (allowing 136.7 ypg) – will be tested in a huge way in slowing down Johnson and a trio of running backs.

And while the running game has been stronger statistically for Alcorn, the Braves have dangerous weapons at the wide receiver position in Raidarious Anderson, Chris Blair and Dayall Harris who can make plays down the field in the passing game.

Anderson, who ranks sixth in the conference in receiving yards, leads Alcorn with 459 on 28 catches for three touchdowns. Blair leads the team in receptions with 35 for 457 yards and six touchdowns while Harris has snagged 20 catches and recorded 356 yards and four touchdowns. The Braves’ offense also ranks first in earning first downs per game (23.2) and third in converting on third down opportunities.

Moving the ball down the field and scoring points have not been a problem for the Braves. However, considering a low-scoring 7-3, grind-it-out type of an affair a year ago, the Tigers hope to duplicate a similar game plan from last year, with hopes of limiting the Braves points and offensive production.

“The big thing I try to do defensively, I try to set it up so that people don’t get big plays against us,” Hendrick said.

“I mean we’ve given up some but this year, we’ve been exceptionally good at not letting people throw balls over our heads, not letting people have long runs. I can’t remember any long plays that have really affected the game this year and that’s where we want to be on defense.”

Hayes has thrown for 744 yards, six touchdowns and three interceptions for the season. Like the Braves, the Tigers also have several backs who can get up the field in the running game including Jordan Johnson, Keshawn Harper, Quitten Brown and Juavon Brown.

Johnson – the Tigers leading rusher with 528 yards and three touchdowns – missed the Alabama State game due to a lower leg injury he suffered during the Prairie View game. Though Johnson has been gone and the rushing attack has remained dominant, the Tigers hope to have him back for Saturday’s game.

“He’s coming along well,” Hendrick said. “We’ll ramp up his reps a little bit later as the week progresses.”

In addition to the run, Hayes will look to get the ball to some of his favorite receivers in Warren Newman, Benjy Parrish and Romello Shumake. Newman leads the Tigers in receptions (21) and receiving yards (219) with one touchdown. Parrish has caught 17 passes for 186 yards while Shumake has recorded 12 catches, 148 yards, two touchdowns, averaging 12.3 yards per catch.

With a plethora of offensive weapons – something that Hendrick alluded to a week ago – the Tigers hope this will allow them to establish ball control throughout the game.

“We can play field position game, we’ve got a good punter and good special teams. I tell Jarrad … Just do what you can do, get first downs man and if we get first downs, we’ll eventually score points.”

“If we can get off the field on third down and be solid in the red zone, I think we will be in a pretty good position on Saturday,” Hendrick said.

Alcorn, however, brings in a defense that sits second in the conference in points allowed (22.4), first in total defense (292.2), first in rushing yards allowed (93) and fourth in pass defense (198.9). The Braves also have had success in limiting their opponents in first downs and rank second in third-down defense.

But for Hayes, he said that he is not worried about maneuvering through the Braves’ defense on Saturday.

“I think I go against the number one defense in the SWAC every day in practice,” Hayes said.

“I don’t think they can do anything to us that we haven’t already seen. But, we definitely have to have one of our best games that we have had on offense this season for this game but we’ll be ready.”

Each game could be your last

For Hayes, who has only been at JSU for two years, this could be his final game in a Tiger uniform. Like other seniors on the team, he knows how special this moment really is.

“We were talking after the game – me and a couple of the seniors – that this is something that really hasn’t been done at Jackson State in a couple of years,” Hayes said.

Emotions will run high for Saturday’s game but for Hendrick and his Tigers, that’s exactly the way he wants them to be.

“I want them to be playing with a lot of emotion,” Hendrick said.

“I don’t believe I have to do very much to get this team ready. If you were in that tunnel coming up after the game and heard them, you knew what they had on their mind. I think we’ll go out and play hard and we’ll play together and I think we’ll play a solid football game.”