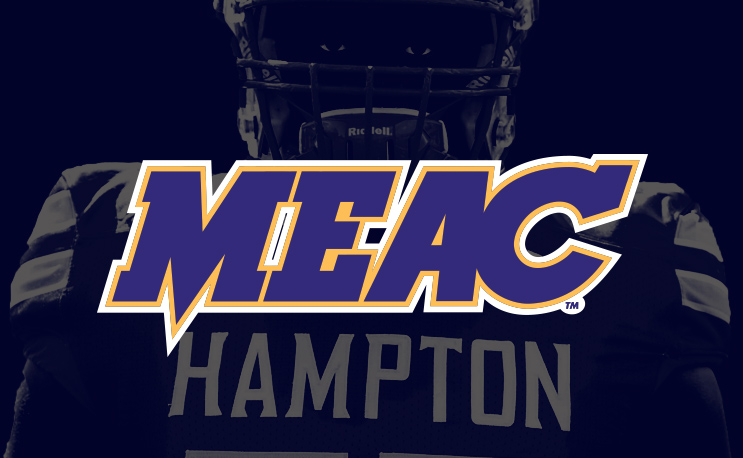 Thank you, Hampton, for complicating MEAC football even more than usual

Hampton isn’t in the MEAC anymore, but that isn’t stopping the newest member of The Big South from adding to the usual chaos that goes on the final week.

The final (full) week of the regular season for the MEAC is this week, and as has often been the case, championship bids are on the line for several schools. This is not an unusual outcome for the only HBCU conference that does not have a championship game. Remember 2014 when the stars and planets aligned to give us not one, not two, not three, but FIVE MEAC champions?

Last year there wasn’t nearly as much drama as North Carolina A&T was unbeaten and head-and-shoulders above the entire conference heading into the final week. But things are back to normal in the MEAC this year, which means there are several outcomes that could shape which (or how many) team (s) will claim a title and postseason spots.

But first, we have to deal with the one unique aspect of this season.

Be sure to watch the “No Huddle” at 10:00 PM on YouTube on Monday Night

Almost one year to the day that HBCU Gameday broke the news that Hampton was leaving the MEAC, the Pirates are still making waves in the MEAC. Well, sort of.

Hampton’s abrupt decision to leave the MEAC started a fight that got pretty ugly for a while. The conference and its once-prized Virginia pupil were involved in a bitter dispute that ended up with all 10 remaining football-playing members keeping it off their schedules. While this was meant to stick it to Hampton for leaving, it also left teams scrambling to find opponents the weeks they would have played it.

Some teams like Howard found non-conference teams to fill in the gap. Most, however, simply inserted another MEAC team into the schedule. The decision was made prior to the season that these games would not count towards the conference schedule, making them just like any other OOC game and counting only seven games towards the title race.

Most fans didn’t pay attention to it. Heck, we forgot for a while to. No one really thought it mattered until Morgan State trotted down to the corner of Sullivan and Lindsay and hit A&T in the mouth with a 17-14 win to end its 15-game winning streak, which included two wins over FBS teams. A&T made sure it was known that it was a non-conference game, and heads started scratching.

A&T’s loss to Morgan State didn’t hurt it in the MEAC, but the loss at home to FAMU sure did. That win gave FAMU control of the MEAC race, meaning A&T and everyone else need it to lose two MEAC games over the second half of the year. On Oct. 27 it went up to Howard hoping to clinch the title super-early, but got denied and handed its first conference loss of the year. And then it got thumped 44-21 by South Carolina State at home. However, much to the disdain of the Aggie faithful, the game did not count as a MEAC contest because, you guessed it…THE HAMPTON FACTOR.

So that brings us to this weekend’s contest, particularly the rivalry games going on in Florida and North Carolina.

For the first time in a long time, all MEAC and HBCU eyes will be first and foremost in Orlando. The Florida Classic is one of those games that is a must-see every year despite the standings. This year, however, the standing are of the utmost importance. A win by FAMU means it is the MEAC champion (outright if A&T loses) and it will represent the conference in the Celebration Bowl. It’s the easiest, simplest result. If that happens, no matter what goes on in Durham, the Rattlers are on top.

If, however, Bethune-Cookman beats FAMU like has for the past seven years, things get really interesting. Here are the scenarios:

The final three scenarios bring us to:

The MEAC’s tiebreaker process is solely to determine which team will receive the conference’s automatic bid to the 2018 Air Force Reserve Celebration Bowl. In the event of a tie for the conference title, all teams included in the tie will share the title and be named co-champions.

North Carolina A&T State can win an outright MEAC championship and return to the Air Force Reserve Celebration Bowl with a win on Saturday and a Florida A&M loss.

If the Aggies lose and Florida A&M loses to Bethune-Cookman, coupled with wins by South Carolina State in its final two games, the Aggies would be declared co-champions with FAMU, B-CU and S.C. State at 5-2 and clinch a berth to the Air Force Reserve Celebration Bowl. In this scenario, North Carolina A&T and Bethune-Cookman would have the best record (2-1) amongst the four tied teams, with North Carolina A&T State representing the MEAC in the Air Force Reserve Celebration Bowl due to its head-to-head win over Bethune-Cookman.

If the Aggies lose, Florida A&M loses to Bethune-Cookman and S.C. State drops one of its final two games, the Aggies would be declared co-champions with FAMU and B-CU at 5-2. All three teams would remain tied (1-1) in its head-to-head match-ups and the Aggies would earn the Air Force Reserve Celebration Bowl bid based on earning 14 points by virtue of its non-conference wins against FBS and FCS opponents. Neither B-CU nor FAMU have non-conference wins versus Football Bowl Subdivision (FBS) or FCS opponents.

The following are the remaining games for each team involved in the race and the various tiebreaking scenarios that would determine the MEAC’s Air Force Reserve Celebration Bowl participant:

In other MEAC news, the Savannah State/Howard football game, a non-conference game which was originally postponed on Sept. 15 due to Hurricane Florence, will not be rescheduled. The South Carolina State/N.C. Central contest which was scheduled for Sept. 15 but also postponed due to Hurricane Florence, will be played on Nov. 24 in Orangeburg, S.C. as the game will count towards the MEAC standings.

Thank you, Hampton, for complicating MEAC football even more than usual