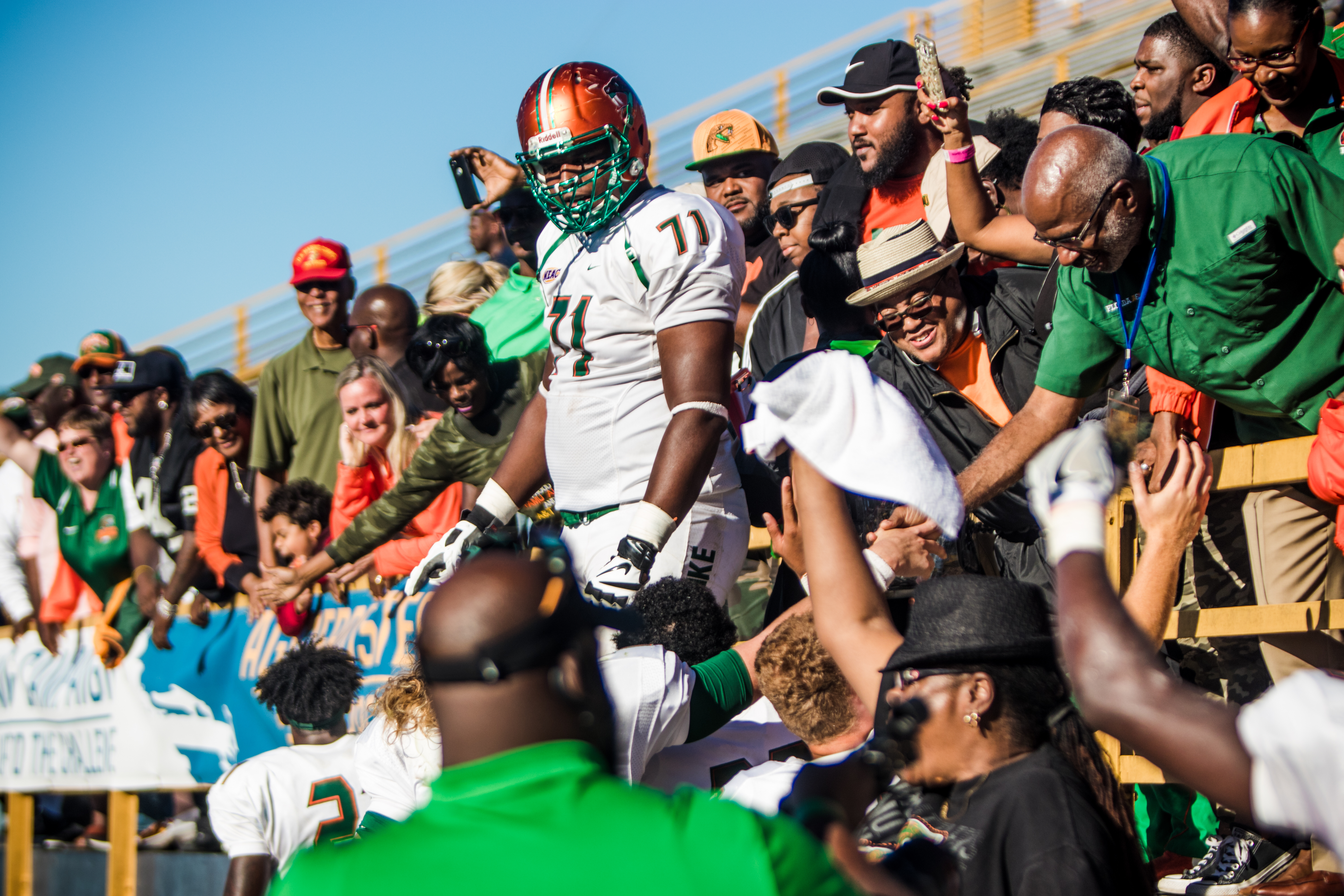 Rattlers Strike: Florida A&M is back

Despite being picked as a middle of the pack team, the Rattlers are unbeaten in the MEAC.

Florida A&M sits in first place in the MEAC right now. Its 5-0 conference record sets the bar high compared to other MEAC foes who have taken multiple conference losses. The road wasn’t so pretty early for Willie Simmon’s team but everything is clicking in Tallahassee.

With two more wins before clinching a MEAC title and Celebration Bowl berth, The Rattlers are most definitely the team to beat.

The Wait Was Worth It

Things might be up now but it’s been a long road for Florida A&M fans and players.

Earlier this summer, the HBCU Gameday team chronicled the historical run by Florida A&M coach Billy Joe and his lethal Gulf Coast Offense in Wali Pitts’ The Mad Bomber and The RAC Boys. With the emergence of “The RAC (Run After Catch) Boys” and quarterbacks like Pat Bonner, Jajuan Seider and Quinn Gray, FAMU dominated the late 90’s and early 2000’s. Coach Joe won five MEAC titles within a six-year span. From 1996-2001, FAMU was in the FCS playoffs every year.

This is the last stretch that Black College Football fans can look to when referring to FAMU dominance. Since then, schools like SC State, Hampton, NC A&T and arch-rival Bethune-Cookman have dominated the MEAC landscape. Let’s talk about BCU shall we?

Ever since FAMU’s last FCS playoff berth in 2001, the Wildcats have gone 11-5 against the Rattlers in the Florida Classic. To make things worse, they have won the last six contests.

On a broader scale, losing has been connected to the Rattlers recently; more than FAMU fans would like to talk about. The Rattler’s last winning season was in 2011 when they went 5-3 in the MEAC and 7-4 overall. That fact will most likely be resolved after this season. But between 2012 and 2017, FAMU failed to break over. 500 in conference play. Alex Wood resigned after last season. His 8-25 stretch over three seasons was most definitely a dark sport in FAMU football history.

On paper, it’s hard to understand but the FAMU ties came full circle for Simmons.

“The main reason I came back was to restore FAMU to its rightful place as the pillar of excellence in college football at this level,” Simmons said. “That’s what I grew up knowing it as.”

Check out this video of @HCWillieSimmons during his weekly press conference. https://t.co/P75RhWnOaG

Simmons was very familiar with FAMU and he tapped into a legendary FAMU staple: The Gulf Coast Offense.

Luckily for the Rattlers, Simmons knows about offense. In 2015, his PVAMU Panthers were the highest scoring FCS team in the nation, averaging 44.9 points per game. The Panthers scored 38 points or more nine times, including three 40-point games, and four 50-point games. His offensive scheme landed players in the position to lead various statistical categories and win conference awards on a yearly basis.

As he brought his explosive scheme to Tallahassee, he had an overshadowed offense ready to torch defenses on a consistent basis.

Ryan Stanley and the FAMU offense

Simmons believes that this offense is “a playmaker offense” and making plays is what they do. Ryan Stanley is the leader of this explosive offense.

So far this season, he’s exceeded expectations and has been consistent in all seven games so far. Despite the loss, he flamed Jackson State for 340 yards and one touchdown. Two weeks later, he absolutely silenced the NCCU Eagles and put the MEAC on notice after a four TD performance on the road in Durham. And lately, he put three touchdowns on the Morgan State defense, a defense that has not been beat as much this season. Overall, Coach Simmons appreciates that “he’s playing within the offense” while spreading the ball.

Stanley’s attack has been helped by a few good receivers around him. Chad Hunter has caught six touchdowns so far this season and he has gained over 450 receiving yards as well. Xavier Smith and Marcus Williams both have over 250 receiving yards.

When the ball is not in the air, the Rattlers rushing attack is lethal. Bishop Bonnett and Deshawn Smith both have rushed for over 350 yards so far this season. The balanced rushing attack and explosive weapons on the outside make this offense hard to stop.

During the past five games, FAMU has outscored opponents 163-51. Only allowing 51 points in a MEAC season when every team is giving up points is something that stands out. The Rattler defense currently ranks third in the MEAC and tied for 23rd in the country with 333.0 yards allowed per game. And if you take away their game against Troy, their defense has been very solid.

When asked about the success of the Rattler D, Simmons stated that a reason for this is because “nothing is going to slide while playing for Ralph Street.”

The Rattler’s defensive coordinator is “intense” and brings a no-nonsense approach to his coaching. Simmons notices that the defense “has taken on the personality of their coordinator.”

Taking on that intense mindset has resulted in 21 points being the most the Rattler defense has allowed during their wins. They quieted Savvan State and NC Central. And they held the Aggies scoreless in Greensboro in the second half of their contest.

Derrick Mayweather is leading the team in tackles. He already topped his amount of tackles from last year and will be adding more for sure. Antonio Miller, Andrew Hines, and Orlando Mckinley all have two interceptions each.

Rattlers win! 38-3 over MSU to go to 6-2 overall, 5-0 in the MEAC. This is FAMU's first winning season since 2011. The Rattlers can clinch a share of the MEAC title with a win next week against the Howard Bison in Washington, D.C. #fangsup #fallin #willenium pic.twitter.com/7dZY46swDK

The Rattlers have three games left and their destiny is in their hands. It should be noted that only two of those games will count towards their conference record. They hold a tiebreaker over North Carolina A&T if they lose at least one game. The goal is to win at least two games…on paper. In reality, the Rattlers will want to finish with no MEAC losses.

“Play as hard as you can. Practice as hard as you can to be ready for Saturday. Then once the game is over, we’ll let the chips fall where they may,” he said. “That’s our mindset. That’s how we keep from trying to see how big this game could possibly be. We really haven’t even talked to the team about we win this one, this is what’ll happen. We need to win this game because we’re preparing to win a football game.” – Coach Willie Simmons

The Howard game might turn into a shootout but after watching Caylin Newton’s last two contests, it’s hard to see that happening. If FAMU gets past the Bison then it’s time to book hotels in Atlanta. South Carolina State provides a defensive test but the ability to put up points will come into play. More importantly, the South Carolina State doesn’t count as a conference game so it’s actually the one game the Rattlers could slip up in without hurting their chances.

Although the season isn’t over yet, it’s safe to say that Florida A&M football is back.

Rattlers Strike: Florida A&M is back

197
The Latest in HBCU Sports and Culture